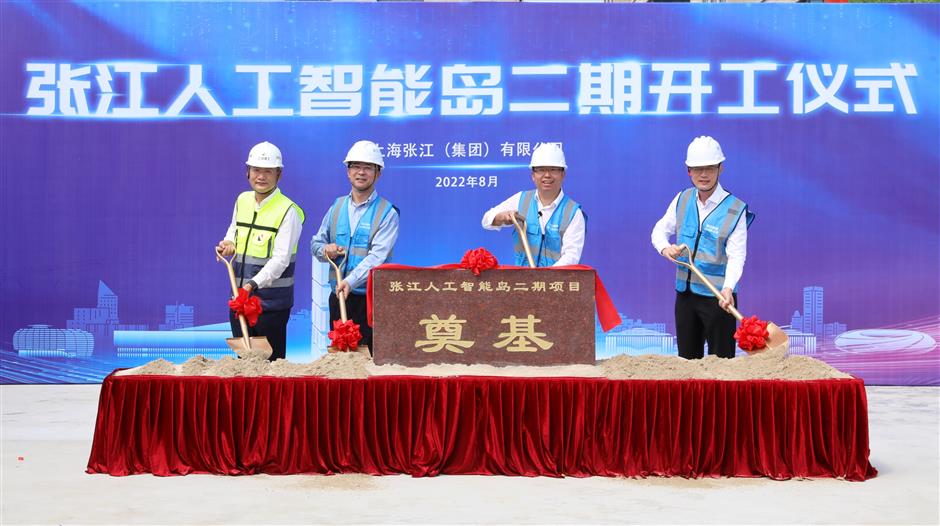 A highlight of the projects is the second phase of Artificial Intelligence Island, also known as AIsland, located in the city's innovation engine – Zhangjiang.

AIsland, with a floor area of 66,000 square meters – nearly the size of nine standard soccer fields – has grown into an AI highland since it opened in 2019.

Global industrial leaders like IBM, Microsoft and Alibaba have set up shops in AIsland to engage in big data, blockchain and other cutting-edge technologies. Meanwhile, many innovative application scenarios have taken shape here where robots can be seen patrolling around, delivering parcels and cleaning roads.

The second phase of AIsland's construction, with an investment of nearly 4.2 billion yuan, will consist of three research and development office towers, a library, commercial complex, entertainment venue and sports facilities. It is scheduled to be completed in 2026.

Pudong's industrial development has quickly rebounded this summer. In the first seven months of 2022, Pudong has taken in nearly 33 billion yuan in industrial investment, up almost 20 percent over the same period last year, accounting for more than 46 percent of the city's total.

The Pudong government says it is confident it will meet its industrial investment goal of 71.5 billion yuan this year.