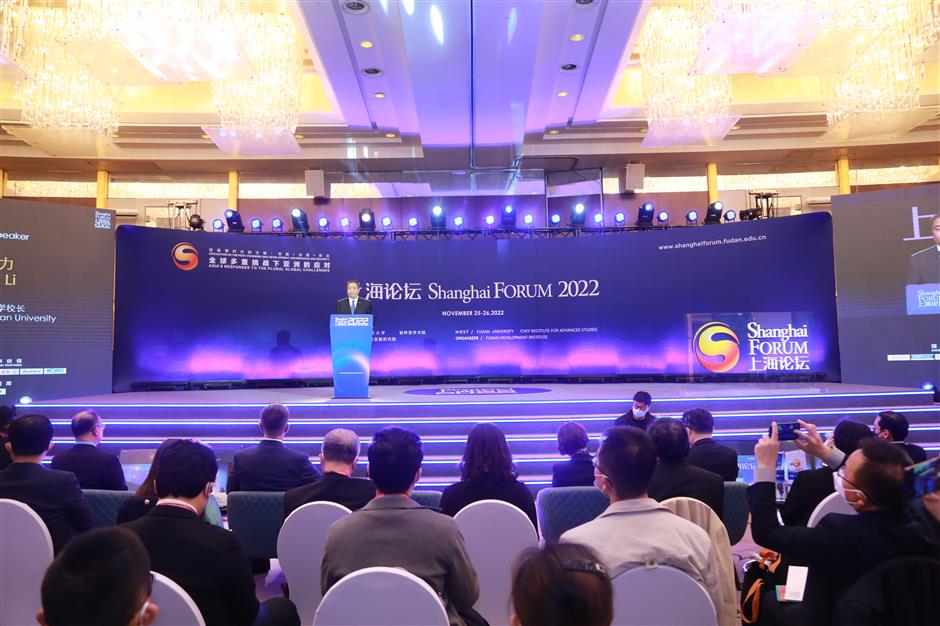 Jin Li, president of Fudan University, delivers a speech at the opening ceremony of Shanghai Forum 2022.

On the theme of "Asia's Responses to the Plural Global Challenges," they discussed how China and other Asian countries can continuously make contributions to the development of the whole world under multiple challenges.

"A growing, prosperous, stable and dynamic Asia serves the common interests of all countries and regions, including China," said Jin Li, president of Fudan University, the organizer of the forum, at the opening ceremony.

"Rooted in Asia, we need to build global consensus to find solutions to the world's most pressing and critical issues, and put forward plans at the Shanghai Forum on major topics of global governance."

He said Fudan will continue to promote the opening-up of education, carry out in-depth cooperation and exchanges with other parties in science and technology, culture, environment protection and other fields, and contribute Asian wisdom to regional peace and development.

Chey Tae-won, chairman of SK Group, said since its launch in 2005, the forum has become a good platform for collecting wisdom to solve global challenges.

He said the global climate crisis is getting worse year by year, threatening life and biodiversity on Earth, and extreme weather is having an unprecedented impact on humanity. Therefore the whole international society should band together to overcome the global crisis and reduce environmental damage.

He said that both China and South Korea have announced their carbon neutrality targets with related policies introduced and green technologies developed. He wishes the two countries can work together to bring positive changes to Asia and the world.

A growing, prosperous, stable and dynamic Asia serves the common interests of all countries and regions, including China.

In the keynote speech section, Chas Freeman, former ambassador of the United States to Saudi Arabia, pointed out that China has become the largest trade and investment partner for all its neighbor countries, and that ASEAN has become the world's fifth largest economy thanks in a large part to the opening up of China.

Wang Feng, foreign member of the National Academy of Lincei in Italy, talked about the trend of decreasing birth rates in East Asia and its impact on regional economic development.

He said the rapid economic growth in the past decades has improved individual welfare in East Asian countries, with people becoming healthier and living longer, while accessible material resources are more abundant.

He said to adapt to the new situation, governments and enterprises should work together to create fairer, more sustainable and widely supported social and policy systems.

Dino Patti Djalal, former vice minister for foreign affairs of Indonesia, said he was proud of the achievements Asia has made in the past decades with mutual trust among Southeast Asian countries and ASEAN members increased from five to ten.

He said other regions in the world should learn from ASEAN countries in dealing with conflicts and deepening cooperation.

Arancha Gonzalez, former chief of staff to the director-general of the WTO, said as a key part of Asia, China has assumed important global responsibilities in promoting reform and opening-up and accelerating steady economic development.

She said Asian countries can learn from ancient Chinese wisdom – to rule with practices – when facing plural challenges.

Jean Tirole, winner of 2014 Nobel Prize in Economics, pointed out that the whole world is facing multiple challenges including climate change, inequality, under-education, lack of innovation and debt build-up.

He said technology advances and innovation are important in solving plural challenges, and it's urgent to improve related incentive mechanisms.

He said the world needs disruptive innovative produces but also needs to be aware of the risks brought by new technologies. Therefore, countries need to enhance cooperation to improve management of research and development funds for green technology and promote innovation in health care to build a better future where common interests come first.

Based on experiences from Asia and China, he said the world needs a stable political environment to promote long-term predictable economic governance. It also needs forward-looking strategies to promote digitalization and green transformation and intervening measures to reduce economic inequality and improve social inclusiveness.

He said development should be accessible to all, and multilateral mechanisms are needed to protect the common interests of all countries.

The forum will run through Saturday with five round-table discussions on topics ranging from ESG to digital finance.