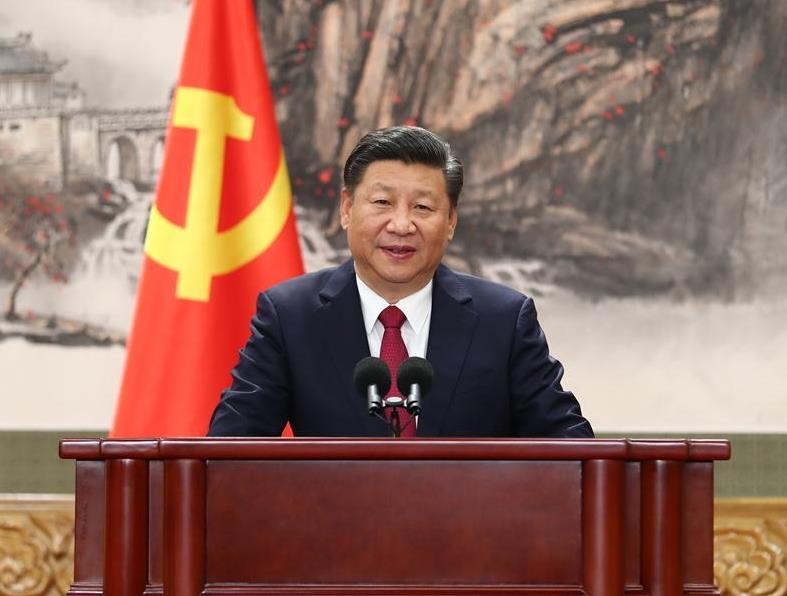 Chinese President Xi Jinping addresses the press at the Great Hall of the People in Beijing on October 25, 2017.

The Communist Party of China (CPC) will generate waves of positive energy which can build into a mighty and nationwide force driving China's development and progress, said Xi Jinping, general secretary of the CPC Central Committee, on Wednesday.

"We must continue to rid ourselves of any virus that erodes the Party's fabric, make great efforts to foster a healthy political environment of integrity, and generate waves of positive energy throughout our Party," Xi said while meeting the press at the Great Hall of the People.

The CPC will mark its centenary in 2021.

"For a party which fights for the eternal well-being of the Chinese nation, the centenary only ushers in the prime of life," Xi said. "As the world's largest political party, the CPC must behave in a way commensurate with this status."

"We do not need lavish praise from others, however, we do welcome objective reporting and constructive suggestions, for this is our motto: 'Not angling for compliments, I would be content that my integrity fills the universe,'" Xi said.

He encouraged members of the press to visit and see more of China, citing a Chinese saying that "it is better to see once than to hear a hundred times."

"We hope that after the Party Congress, you will continue to follow China's development and progress, and learn about and report on more dimensions of China," he said.

Xi said China will make new and greater contributions to peace and development for all humanity.

The CPC and the Chinese people have gone through trials and tribulations, said Xi.

"These experiences have taught us that peace is precious and development must be valued," he told reporters.

"With confidence and pride, the Chinese people will be steadfast in upholding our country's sovereignty, security and development interests," he said.

Xi said China will work with other nations to build a global community with a shared future, and make new and greater contributions to the noble cause of peace and development for all humanity.

Xi said the Party must remain committed to a people-centered philosophy of development and make steady progress toward enhancing people's sense of fulfillment and realizing common prosperity for everyone.

"The aspirations of the people to live a better life must always be the focus of our efforts," said Xi.

"I have no doubt in my mind that our people's lives will see further improvement year after year," he said.

He reiterated the resolve to establish a moderately prosperous society across all metrics in 2020.

"This is a society to be enjoyed by each and every one of us; on the march toward common prosperity, on one must be left behind," he said.

Xi promised further reform and opening-up while meeting the press here on Wednesday.

"We will review our experience and build on the good momentum to continue modernizing China's system and capacity for governance, and make determined efforts to comprehensively deepen reform and open China still wider to the world," Xi said.

The next year marks the 40th anniversary of the launch of reform and opening-up, Xi said. The drive started in 1978.

Xi said China will strive for sustained and healthy economic growth in 2019 which marks the 70th anniversary of the founding of the People's Republic of China.

"We will act on the new vision for development, and strive for sustained and healthy economic growth that benefits people in China and around the world," Xi said.

"We will continue our efforts to accomplish all the tasks laid down in the 13th Five-Year Plan, develop new blueprints for China's future, and see the flourishing of all our endeavors," he said.

These efforts will contribute toward a more prosperous and strong People's Republic of China, he added.