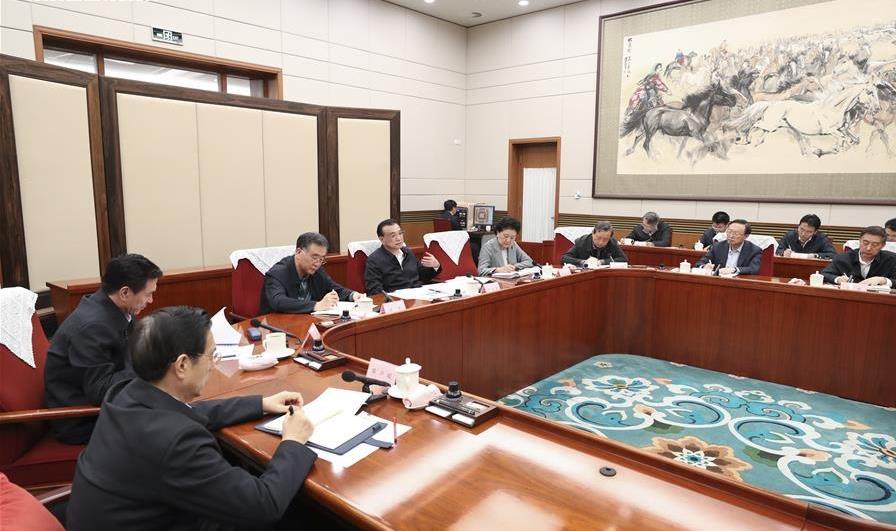 Chinese Premier Li Keqiang presides over the meeting of the Leading Party Members' Group of the State Council to study the spirit of the 19th Communist Party of China (CPC) National Congress, in Beijing, capital of China, Oct. 26, 2017.

Leading Party Members Group of the State Council held a meeting on Thursday to study the spirit of the 19th Communist Party of China (CPC) National Congress.

The 19th CPC National Congress was held from Oct. 18 to 24 in Beijing.

The congress elaborated on the mission of the Party in the new era, and enshrined Xi Jinping Thought on Socialism with Chinese Characteristics for a New Era as a new component of the Party's guide for action, according to a statement released Saturday.

The meeting was presided over by Li Keqiang, Premier of the State Council and Secretary of its Leading Party Members Group.

Attendees at the meeting agreed that it is their primary political task to study and implement the spirit of the congress, especially Xi Jinping Thought on Socialism with Chinese Characteristics for a New Era.

The statement said that it is important to unleash and develop productive forces so as to secure a decisive victory in building a moderately prosperous society in all respects and to embark on a new journey to fully build a modern socialist country.

The meeting stressed maintaining the medium-high growth rate of the economy so as to lay a solid foundation for development for the years to come.

The Leading Party Members Group of the State Council and the government should follow the arrangements made at the congress, strengthen Party self-discipline, give full support to the CPC Central Committee with Xi at the core, said the statement.