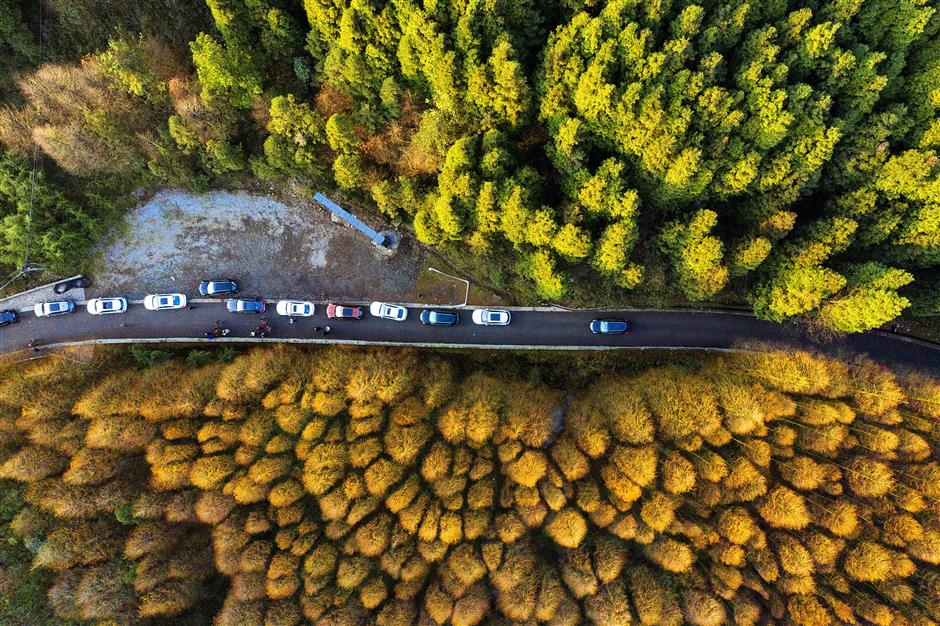 Landscape of the early winter scenery in the Shanwangping Karst National Eco Park in Chongqing, China, on November 25, 2018.

Data from NASA satellites has shown that China and India led the way in greening land, thanks to ambitious tree-planting programs in China and intensive agriculture in both countries.

The study published in the latest edition of Nature Sustainability revealed that at least 25 percent of foliage expansion since the early 2000s globally came in China.

The researchers from Boston University found that global green leaf area has increased by 5 percent in the new century, an area equivalent to all of the Amazon rainforest.

“China and India account for one-third of the greening, but contain only 9 percent of the planet’s land area covered in vegetation,” said lead author Chen Chi of Boston University.

“That is a surprising finding, considering the general notion of land degradation in populous countries from over-exploitation.”

Rama Nemani, a research scientist at NASA’s Ames Research Center and a co-author of the study, said: “When the greening of the Earth was first observed, we thought it was due to a warmer, wetter climate and fertilization from the added carbon dioxide in the atmosphere.” But with data from NASA’s Terra and Aqua satellites, scientists realized that humans are also contributing.

“Humans are incredibly resilient, that’s what we see in the satellite data,” said Nemani.

China’s contribution to global greening efforts comes in large part from its vigorous programs to conserve and expand forests.

To achieve the ambitious goals, the country has taken a slew of measures ranging from reforesting hillsides to creating protected grassland and nature reserves.

Another 32 percent of the greening change in China, and 82 percent in India, resulted from intensive cultivation of food crops.

However, the researchers sounded alarms as well.

They said that the gain in global greenness did not necessarily offset the loss of natural vegetation in tropical regions like Brazil and Indonesia.

The loss of sustainability and biodiversity in those ecosystems cannot be offset by the simple greenness of the landscape, according to the study.

China has already realized its rapid economic growth has damaged the environment and begun to pursue a greener path.

Reiterating that “lucid waters and lush mountains are invaluable assets,” the Chinese leadership has stressed that the country must embrace eco-friendly models for growth and ways of life.

The notion of an eco-friendly way of life has resonated with the general public, with many participating in greening campaigns.

One of the most popular programs is Ant Forest, which was launched in September 2017 by Ant Financial Services Group, an affiliate of e-commerce giant Alibaba Group.

Users can claim carbon points for environmentally friendly things such as walking, using public transportation, going paperless in the office and more.

These points can then be used to water and grow their own virtual saplings.

After the virtual saplings have grown to become virtual trees with the constant watering of carbon points, Ant Financial and their charity partners will plant real trees.

By the end of May, the number of Ant Forest subscribers had exceeded 350 million, reducing exhaust equivalent to 3 million tons of carbon dioxide. More than 55 million trees had been planted.

“Such programs are quite appealing to me,” said Zhang Jing, a 28-year-old salesman. “I feel satisfied to see a real tree planted just by doing some simple things such as riding bicycles and buying tickets online.”

China’s reforestation efforts are paying off, with improved biodiversity and a healthier economic growth model.

Sightings of animals, including leopards, the golden pheasant and roe deer, which once disappeared from the region, have been recorded.

Dense forests have also become a great source of revenue for locals. Saihanba, a vast man-made forest covering about 93,000 hectares in north China’s Hebei Province, 400 kilometers north of Beijing, is a case in point.

Over the years, Saihanba Forest Farm has developed in a sustainable way, with economic growth relying on tourism, tree planting, wind power generation and logging.