Chen Peiyu, a 27-year-old office worker in Beijing, deeply regrets that she may not have the chance to visit the iconic Notre Dame Cathedral in Paris this May due to the fire that engulfed the gothic church Monday.

A huge fire broke out at the historic cathedral, located in the heart of Paris, destroying the spire of the building on Monday afternoon. Online footage showed flames pouring from the roof, sending thick smoke into the sky.

"Such a pity! I didn't even have the chance to see it," Chen said.

The blaze simultaneously ignited concern across China, with many Chinese netizens expressing their sadness on social media.

"It is the landmark of Paris, as well as the cultural heritage of all humankind, the accident should ring the alarm," said Ma Weidu, a celebrated Chinese antique collector, on his microblog.

"The destruction of Notre Dame Cathedral will be the loss of all humankind, it is heartbreaking," read a comment by a Weibo user named Qiandaixi Rebecca. 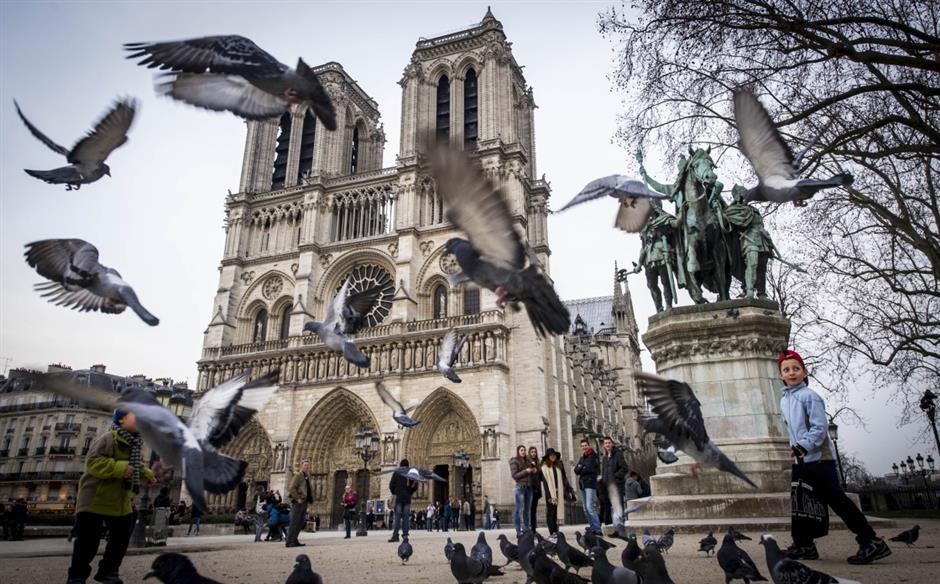 The iconic cathedral is one of the city's most recognizable symbols, and listed as one of the top three tourist sites in Paris on Chinese travel services platform Mafengwo.

Built in medieval times, the world heritage attracts 13 million visitors from all over the world every year, according to its official website.

"Fires have always been a threat for historic relics," said Dai Jian, professor of Beijing University of Technology, who specializes in historic architecture protection.

The accident of Notre Dame is not an individual case. Before the world mourned for Paris, disasters have also caused devastation on a number of priceless cultural treasures, including the National Museum of Brazil and the Iraqi national museum.

Though different in identity and location, every loss of a human treasure saddens people in China and evokes more attention for the protection of human civilizations.

Dai said that it was important to record cultural heritage for restoration, and that advanced monitoring system and pre-warning techniques were also necessary to conduct better protection of old buildings.

"Exchange of ideas, technology and experience on protecting cultural relics between countries and regions should be strengthened to further protect the cultural heritage of all humankind," said Hou Weidong, a researcher from the Chinese Academy of Cultural Heritage.

"These cultural relics only live once, those that have gone won't come back again," Ma said.