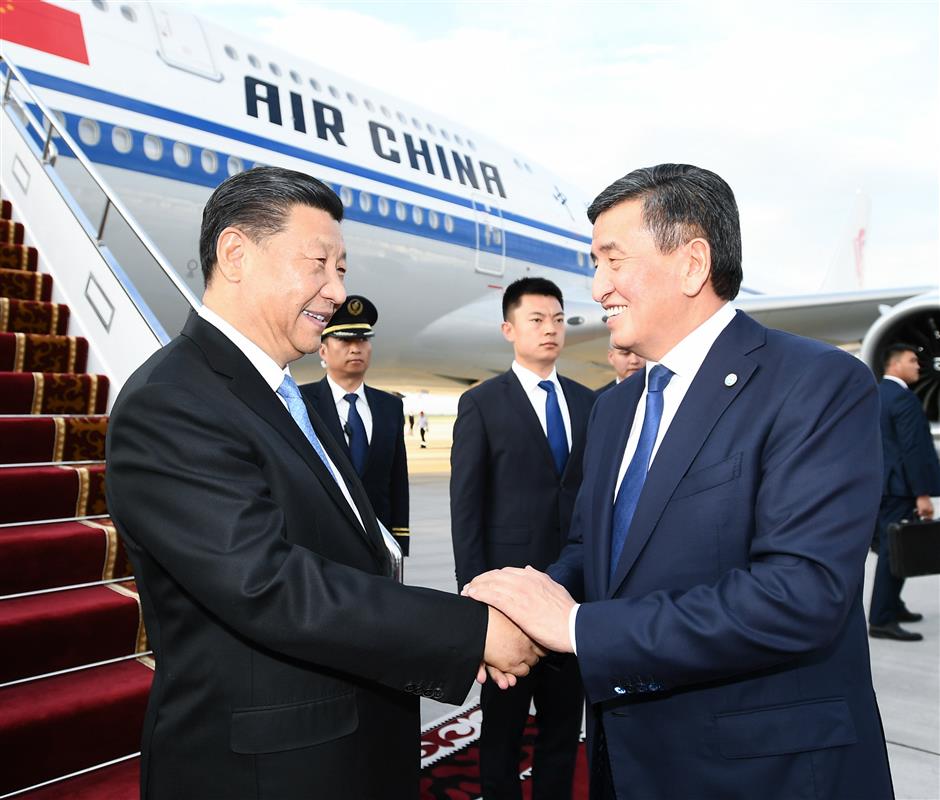 Chinese President Xi Jinping is received by his Kyrgyz counterpart Sooronbay Jeenbekov upon his arrival in Bishkek, Kyrgyzstan, June 12, 2019. Xi arrived here Wednesday for a state visit to Kyrgyzstan and the 19th Shanghai Cooperation Organization summit.

Xi and Jeenbekov had a meeting at the presidential residence in the Kyrgyz capital of Bishkek right after the Chinese president arrived in the Central Asian country for a state visit and the 19th Shanghai Cooperation Organization summit.

Reflecting on the traditional friendship between the countries, the two heads of state discussed the future of bilateral relations with an in-depth exchange of views on issues of common concern.

Noting that it is his second visit to Kyrgyzstan in six years, Xi expressed the delight of visiting an old friend.

Substantial advances in bilateral ties have been made over the past 27 years since the establishment of the China-Kyrgyzstan diplomatic relationship, Xi said, highlighting the two sides' strong political mutual trust, mutually beneficial economic cooperation, mutual reliance in security and close coordination in international affairs.

Xi expressed appreciation for Jeenbekov's public remarks on safeguarding the China-Kyrgyzstan friendship on many occasions.

The Chinese side applauds Kyrgyzstan's achievements in reform and development, and expects more progress of the country in safeguarding national stability and promoting economic development, Xi said.

China is ready to share experience in state governance with Kyrgyzstan to achieve common development and prosperity, Xi said, hailing the solid outcomes in the joint construction of the Belt and Road.

Xi called for concerted efforts to strive for more fruits in the bilateral comprehensive strategic partnership to benefit the people of both countries.

The two sides, he said, should step up coordination within multilateral frameworks including the SCO and the Conference on Interaction and Confidence Building Measures in Asia, stick to multilateralism, and oppose protectionism and unilateralism, so as to contribute to the building of a community with a shared future for humanity.

Jeenbekov said he appreciates the great importance Xi attaches to bilateral relations. He expressed warm congratulations on the 70th anniversary of the establishment of the People's Republic of China and wished China greater achievements.

Recalling his attendance last week at a release ceremony for the Kyrgyz edition of the first volume of "Xi Jinping: The Governance of China," Jeenbekov said the book is of great significance for Kyrgyzstan to learn from China's experience and promote its own reform and development.

Jeenbekov stressed that Kyrgyzstan firmly supports the measures taken by the Chinese government in safeguarding peace and stability in Xinjiang Uygur Autonomous Region and cracking down on extremism. He also thanked China for its strong support and assistance to Kyrgyzstan.

Kyrgyzstan, he said, values China's influence in international affairs and is willing to deepen cooperation with China in various sectors within the framework of the Belt and Road Initiative, get on board the express train of China's economic development, and push for leapfrog development of bilateral relations.