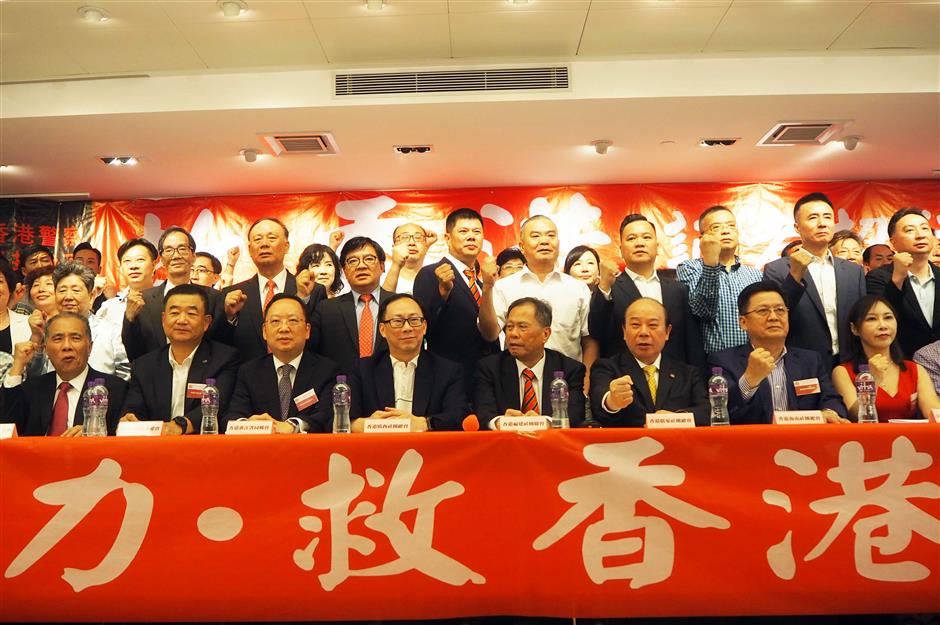 A number of prominent businessmen in China's Hong Kong Special Administrative Region have said that the recent escalating violence has affected Hong Kong's economy and people's livelihood, appealing to different sectors of the society to work together to stop violence and chaos and find a way out for Hong Kong's future.

During the past two weeks, many violent incidents occurred in Hong Kong, causing fears among the public, former chairman of The Wharf (Holdings) Limited Peter Woo said in a published article.

He stressed that stoping violence is the utmost and only demand in Hong Kong at the moment.

The HKSAR government has accepted the demonstrators' demand against the amendment of the two ordinances concerning the transfer of fugitive offenders, and the continued demonstrations now seem to be pursuing other conspiracies and goals, the article said.

The ongoing so-called "five demands movement" is in nature a struggle for power with the central government with an intention to change the HKSAR Basic Law and the decision made by the Standing Committee of China's National People's Congress on August 31, 2014, so as to force a political reform in Hong Kong to enable the opposition to control the HKSAR Legislative Council, he pointed out.

Robert Ng, chairman of Sino Group, described the chaotic situation over the past two months in Hong Kong as distressing, saying that the development of Hong Kong from a small fishing village to one of the world's three major financial centers over the years is the result of the hard work of generations.

Hong Kong's hard-won prosperity and stability should be preserved and cherished, he said, calling for concerted efforts of all parties to bring social order back to normal and to focus on the development of the economy and people's livelihood.

Henry Cheng, chairman of New World Development Company Limited, said it is worrisome that violence in Hong Kong has intensified in the past two months, adding that the continued confrontation or violence has not helped resolve the current impasse, but on the contrary has affected different sectors of the society and left unpredictable sequels.

He called on all sectors to support the police in strictly enforcing the law, and to jointly curb violence and chaos and restore social order.

Peter Lee, co-chairman of Henderson Land Development Company Limited, warned that the continued chaos has plunged Hong Kong's economy into a state with both internal and external troubles. If the economy collapses, it will take a long time to rebuild and recover, retarding the development of a whole generation or even generations.

We all have the responsibility to safeguard Hong Kong, our home, he said, hoping that the general public will join hands to stop violence and chaos, so that the HKSAR government can take measures for reform and move on, and the Hong Kong society can restart to build a future with peace, prosperity and love.

Raymond Kwok, chairman of Sun Hung Kai Properties Limited, criticized the recent spate of violent acts for damaging Hong Kong's economy and people's lives. He called on the demonstrators to stop violence and return to reason, and reiterated that only by carrying out communication and dialogues can people find a way out for Hong Kong.

"One country, two systems" is the cornerstone for Hong Kong's success and the backbone of its prosperity, he said, adding that it should never be undermined by the escalating violence.

He expressed support for the HKSAR chief executive and government in exercising governance in accordance with the law, as well as to the Hong Kong police in safeguarding the rule of law.

CK Asset Holdings Limited issued a statement on Wednesday calling for stop of violent acts and hoping for rational discussions and the rebuilding of a harmonious society.

Charles Ho, chairman of Sing Tao News Corporation Limited, pointed out in a published article that what happened in Hong Kong recently is distressing to those who love Hong Kong but exhilarating to those who are hostile.

Due to the incitement by those with ulterior motives, people in Hong Kong with different views put aside the "Lion Rock spirit" of inclusiveness and striving side by side, leading to an extreme situation in which people fight against each other and the police are put at the focal point of the conflicts, he said, adding that some foreign governments as well as some politicians from Taiwan are adding fuel to the flame.

He pointed out that the disputes can only be settled in a peaceful and law-abiding manner and through rational communication.

A total of 41 real estate developers in Hong Kong have also issued a joint statement on Wednesday, strongly condemning the escalating violence, expressing firm support for HKSAR Chief Executive Carrie Lam, the HKSAR government, as well as support for the police force in strictly enforcing the law, curbing violence and chaos, and maintaining social order, so as to bring back the rule of law and calm to Hong Kong as soon as possible.