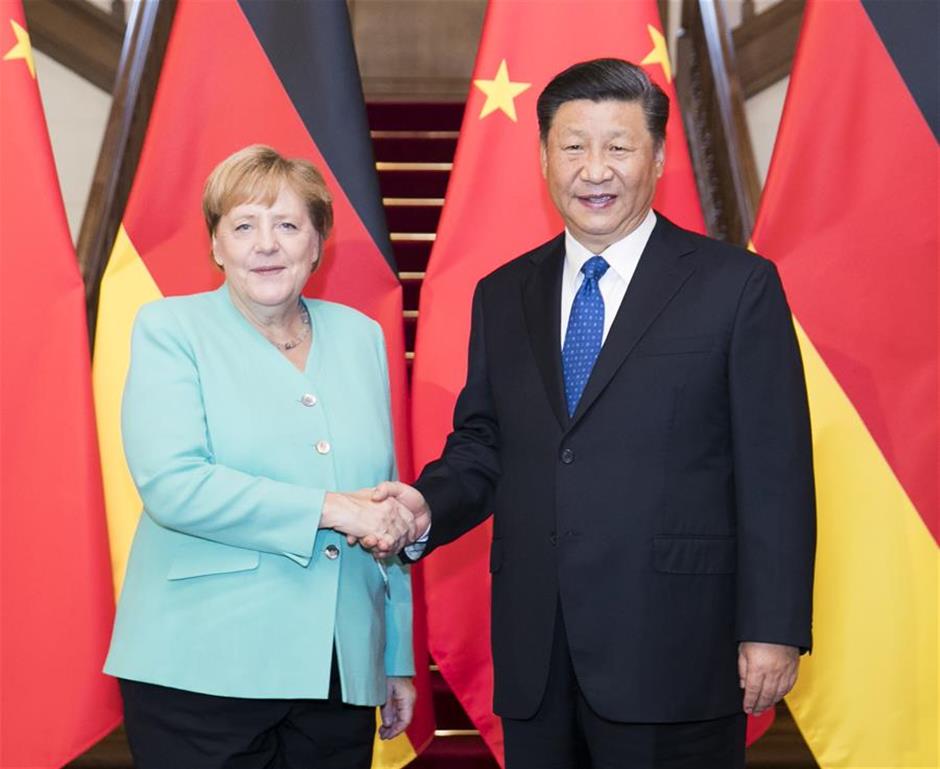 The current era is full of challenges and increasing risks, Xi said, adding that unilateralism and protectionism pose a serious threat to world peace and stability, and no country can be immune from it.

As two responsible major countries, China and Germany need to strengthen strategic communication, coordination and cooperation to address the common challenges facing mankind more than ever.

"This is becoming increasingly important not only for China and Germany but also for the world," said Xi.

Xi stressed that it is necessary to make the pie of China-Germany cooperation bigger.

Xi said Merkel's visit to China has reached many economic and trade cooperation results, which proves China matches its words with deeds to expand opening-up. He added that the Chinese market is large enough and will grow larger as China develops, which will bring more new opportunities to Germany and the rest of the world.

"Auto industrial cooperation is a good example of mutual benefit between the two countries," he said.

China is accelerating the opening of its financial and service sectors, and welcomes the German side's investment in these sectors, Xi said.

As Merkel will visit Wuhan, Xi also welcomed German enterprises to participate in the construction of the Yangtze River Economic Belt.

Xi called on both countries to strive for broad participation and support of the two peoples, especially young people, in the development of China-Germany relations.

He called on China and Germany to demonstrate responsibility, jointly maintain international fairness and justice, safeguard free trade and multilateralism, and strengthen cooperation on climate change and cooperation with Africa.

Merkel said Germany-China dialogue and cooperation are extensive and China is Germany's largest trading partner. Cooperation between the two countries is developing in a better direction.

Germany is very pleased to share China's achievements in expanding its opening-up policy and is willing to continue to increase investment in China, expand cooperation areas and promote people-to-people and cultural exchanges, said Merkel.

She said unilateralism and protectionism also have a negative impact on Germany. All parties should work to resolve differences and frictions through dialogue and consultation.

The German side is willing to strengthen communication and coordination in international affairs with China in the spirit of multilateralism and free trade. Germany is willing to play a constructive role in the development of EU-China relations, said Merkel.