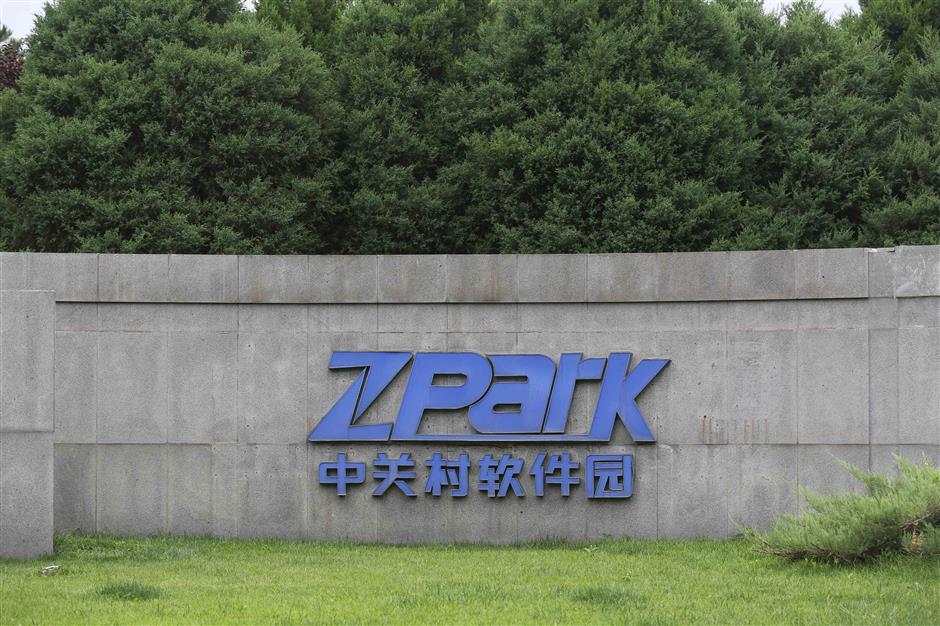 The application was provided by Leyard Group, a visualization solutions provider based in Beijing's high-tech hub Zhongguancun Science Park.

The new technology was demonstrated through an LED display, measuring over 200 square meters, giving basketball fans the pleasure of watching live matches transmitted in real-time with ultra-high-definition display.

Li Jun, chair of the group, said it took 20 years for Leyard Group to reach the position. Since the company was listed in 2012, its profits and revenue have increased more than tenfold.

As the experimental field of China's institutional innovation, Zhongguancun is known as "China's Silicon Valley." In 2018, there were more than 22,000 high-tech enterprises in Zhongguancun, with total revenue exceeding 5.8 trillion yuan (814 billion U.S. dollars), an increase of 11 percent year on year. Enterprises in the tech center applied for 86,000 new patents in 2018, a year-on-year increase of 17 percent.

Yet 70 years ago, the area in the west of Beijing was just a sparsely populated suburb.

Changes began to happen in 1984. A group of technicians started their own business in a small bungalow in the area. The company came to be known as Lenovo, a globally renowned Chinese tech giant with an annual revenue of hundreds of billions of yuan.

It was not until 1988 when the first privately owned high-tech firm was registered in Zhongguancun. The enterprise Yonyou obtained the science park's first private enterprise license, numbered "SY0001."

"That day, I slipped out of the office where I was working to attend the inaugural meeting of Zhongguancun becoming the Beijing New Technology Industry Development Pilot Zone. It was so exciting," recalled Wang Wenjing, Yonyou's chairman and CEO.

Over the past three decades, he saw Yonyou develop from a two-person software service company into one that hires over 10,000 employees. The company has transformed its main service from software to cloud computing.

Zhongguancun strengthened its role as an innovation incubator after the State Council approved that it would be built into a national scientific and technological innovation center with global influence in 2009.

The Institute of Automation of the Chinese Academy of Sciences has over the years helped hatch and nurture an average of 10 high-tech enterprises in the park each year. The start-ups are specialized in in-depth integration of artificial intelligence technology with applications in medicine, security, advanced manufacturing and other fields.

Zhang Zhengtao is a beneficiary of this trend. He works both as a researcher at the automation institute and chairman of CASI Vision, a technology company devoted to industrial appearance inspection.

In 2018, the Zhongguancun Administrative Committee partnered with the Ministry of Education and the Chinese Academy of Sciences to set up technology transfer offices in 12 colleges and universities. They also supported over 1,500 school-enterprise cooperation projects, 411 technology transfer projects and incubated 40 science and technology enterprises.

Zhongguancun is one of the communities in the world boasting the highest concentration of innovation resources, housing leading global tech incubators including Intel Labs and Plug & Play.

The Zhongguancun Administrative Committee's data show that over 10,000 foreign staff and 40,000 overseas returnees are currently working in Zhongguancun, attracted by the park's policies on entry and exit as well as residence, venture investment and financing.

Ahmed Alsayadi from Yemen is among over 8,000 overseas students that joined Zhongguancun's "Cirrus Project," a matchmaking program to help the students secure internship and job opportunities in over 500 Chinese firms.

"With the help of the program, I was able to obtain a work visa when I graduated from Tsinghua University in 2017. I was overwhelmed," said Alsayadi.

He has started his entrepreneurship in Zhongguancun, using artificial intelligence and big data technology to build an Arabic news platform.

Wu Jiang, a researcher at the Chinese Academy of Personnel Sciences, said that the entry-exit policy for foreign talent piloted in Zhongguancun was groundbreaking, helping gather innovative and entrepreneurial global talent to enhance China's attractiveness and cohesion.