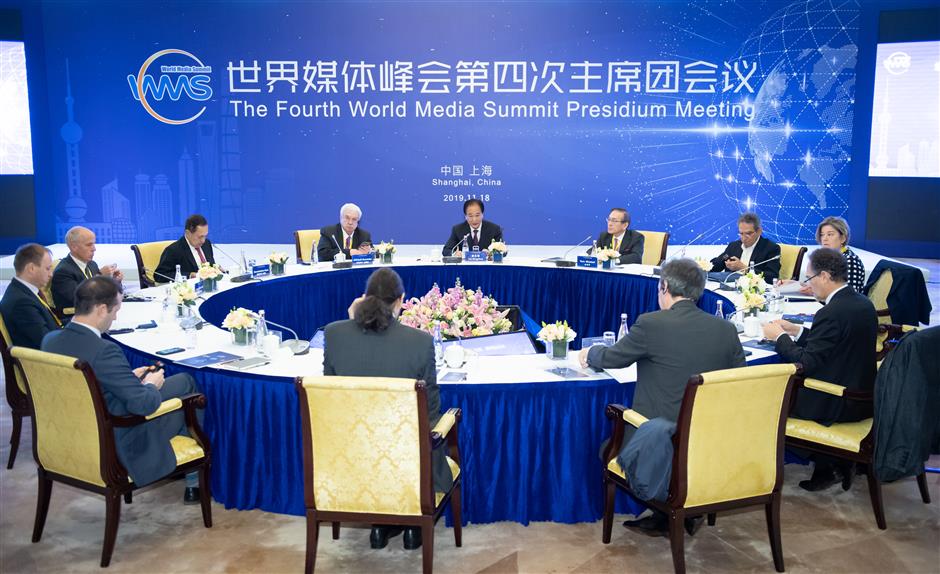 The fourth meeting of the World Media Summit is held in Shanghai on Monday. Representatives of 13 media organizations from 11 countries and regions attended the meeting.

Senior executives from major international media organizations have championed new visions on the development of the global media industry to cope with the profound changes brought by the rapid development of new technologies.

The executives, who attended the fourth meeting of the World Media Summit presidium in Shanghai on Monday, called for innovations and cooperation between media organizations to improve their news services and shoulder greater social responsibilities such as combating fake news.

Cai Mingzhao, executive president of the WMS and president of Xinhua, said changes in the media landscape are mainly reflected in four aspects: cross-border communications have transformed the media landscape; mobile end users business has become mainstream in the field of communication; technological evolution has recast modes of business for news industry; fake news posts challenges to journalism ethics.

Regarding the development and innovation of media in the future, Cai proposed that mainstream media should keep their advantages in content, innovate news products, strengthen technological leadership, and build an all-media team.

He said Chinese media have proposed to advance the integration of traditional and new media, conduct a systematic transformation of all links of news dissemination, and work hard to realize the media’s integrated development.

“Amid the tides of media transformation, we cannot reverse the flow of this great river. We can only go with the flow, be proactive about innovations and take the initiative with our development,” he said.

The delegates agreed that news media should follow the trend of widespread and profound changes taking place in the global media landscape, attach more importance to technological innovations, fully play their professional advantages, step up pragmatic cooperation and jointly discuss strategies for innovation and development.

Toru Mizutani, president of Kyodo News, said Kyodo has started to actively introduce artificial intelligence and the latest information technologies to editorial operations and digital services, such as automatically summarizing and categorizing content for distribution on a media-by-media basis.

The executives also proposed that greater efforts should be made to crack down on fake news online, as well as to establish effective mechanisms and apply new technologies to safeguard the authenticity and credibility of news reporting.

Noting that the popularity of the Internet has blurred the lines between fact and fiction, Cai said fake news posts challenges to journalism ethics, not only harming the audience but also undercutting the authority and credibility of mainstream media.