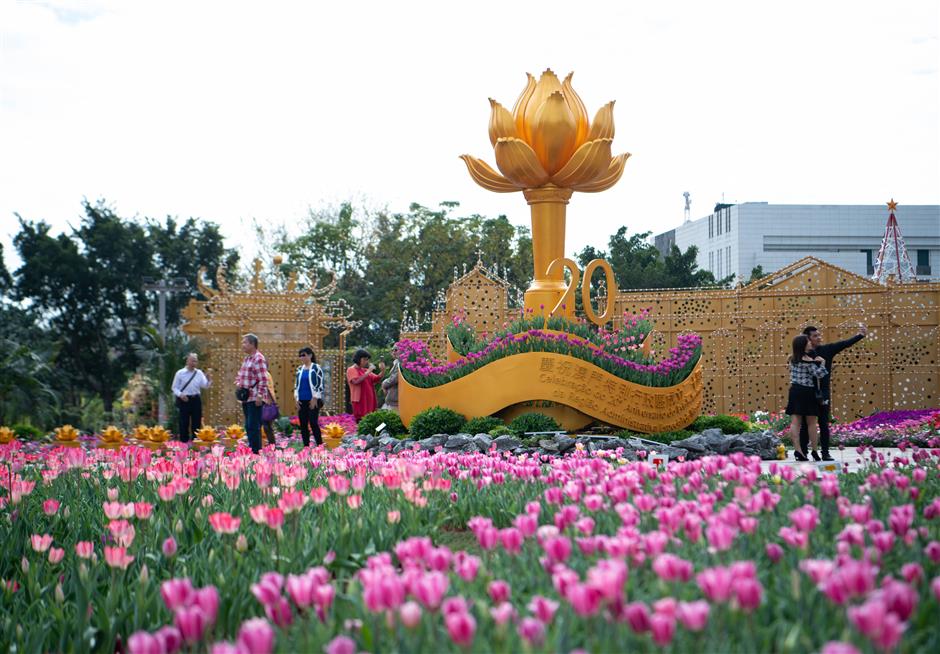 On an ordinary day before Christmas, tourists from various parts of the world are seen at the Ruins of Saint Paul’s complex, the A-Ma Temple and other heritage sites of Macau, a colorful and enchanting city with a unique fusion of Eastern and Western cultures.

Containers are piled like mountains at the Ka Ho Harbor and large crowds of travelers were crossing the Gongbei Port linking Macau with the mainland.

Macau is ready to host a grand celebration tomorrow to mark the 20th anniversary of its return to the motherland.

During the past 20 years, the Macau Special Administrative Region, once burdened with a floundering economy and notoriously poor security, has experienced profound changes to become a flourishing international free port with its per capita GDP and life expectancy among the highest in the world.

Macau’s transformation has demonstrated to the world a successful practice of “one country, two systems,” a fundamental national policy formulated and continuously improved by Chinese leaders to resolve sovereignty-related questions arising from the nation’s complicated past.

On December 20, 1999, standing under the regional and national flags, 44-year-old Ho Hau Wah was sworn in as the first chief executive of the Macau SAR.

“I made two promises: one was to implement the Basic Law without compromise to make ‘one country, two systems’ a success in Macau; the other was to try my best to deliver a Macau where people could live and work in peace and contentment,” Ho, now vice chairman of the 13th National Committee of the Chinese People’s Political Consultative Conference, said in a recent interview.

“Macau residents of all ages have a full and accurate understanding of the Basic Law and the Constitution. This has led to the smooth implementation of the ‘one country, two systems’ with Macau characteristics,” he said.

Macau has enjoyed a long tradition of loyalty to the motherland even before its return in 1999. Since then, the tradition has been maintained and enhanced at different levels of government and within society, with the Constitution and the Basic Law advocated by all people, incumbent Chief Executive of the Macau SAR Chui Sai On said.

One key to Macau’s successful practice of ‘one country, two systems’ is that the Macau SAR has well implemented the requirements by the central government, said incoming Chief Executive Ho Iat Seng, who will be sworn in as the fifth-term chief executive tomorrow.

Twenty years have flown by since Macau’s return to the motherland, during which it drew international attention with its tremendous development.

Macau’s gross domestic product soared to US$54.6 billion in 2018 from US$6.1 billion in 1999, with its financial reserves and foreign exchange reserves growing exponentially.

Macau people aged 65 and above receive a combined allowance of up to 6,099 Macau patacas (US$760) every month, he said.

Students enjoy free education for 15 years. Since 2007, the SAR government has been distributing year-end bonuses of up to 10,000 patacas to all residents. 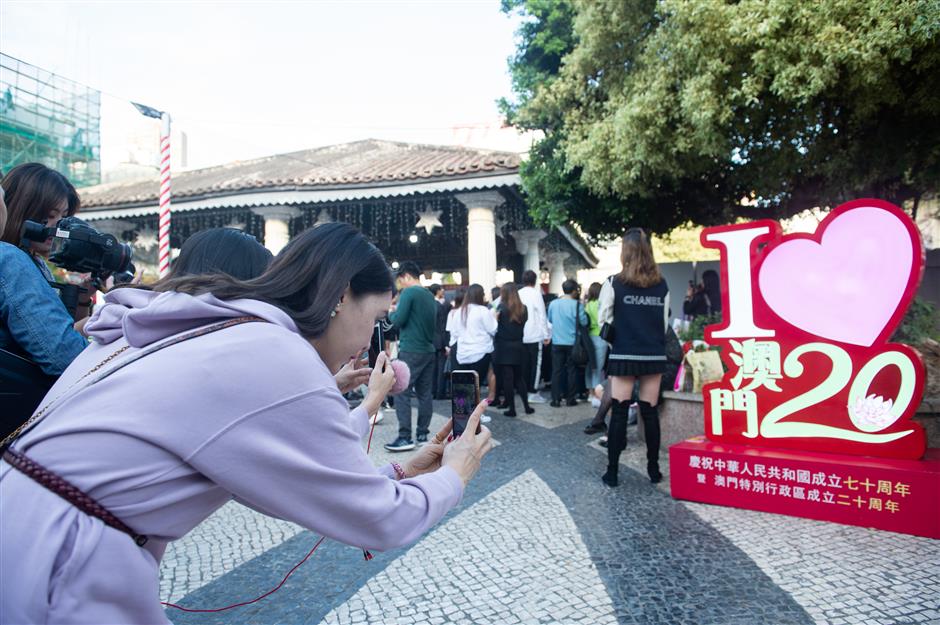 A tourist takes photos of a display highlighting the 20th anniversary of Macau’s return to the motherland in the special administrative region yesterday.

To promote economic growth, Macau has in recent years been striving to diversify its economy while taking on new roles as an international tourism and leisure center, a platform for trade cooperation between China and Portuguese-speaking countries and an active participant of the Belt and Road Initiative, among others.

In the outline development plan of the Guangdong-Hong Kong-Macau Greater Bay Area unveiled earlier this year by the central government, Macau is listed as one of the four core cities in the area to serve as one of the core engines for regional development.

These moves fully demonstrated the central government’s strong support for Macau to integrate into the overall development of the country, and will greatly promote the infrastructure connectivity and smooth flow of personnel and goods between Macau and the mainland, Ho Iat Seng said.

“We hope the central government and all departments will continue to provide help to Macau. Macau will also try its best to make greater contributions to the overall development of the country,” said Ho.

The Macau SAR has also made impressive achievements in its external exchanges, bringing the number of international organizations it has joined to 120 from 51 before its return, Commissioner of the Ministry of Foreign Affairs in the Macau SAR Shen Beili said.

All residents have a clear understanding that Macau is backed by a strong motherland and the support of 1.4 billion compatriots, according to Ho Hau Wah. Patriotic education is deep-rooted in schools, youth societies and government agencies, which has helped pass the torch of patriotic tradition from one generation to the next, he said.

Macau residents consciously align their own fate with that of the motherland, seeking their development opportunities within the overall development plan of the country.