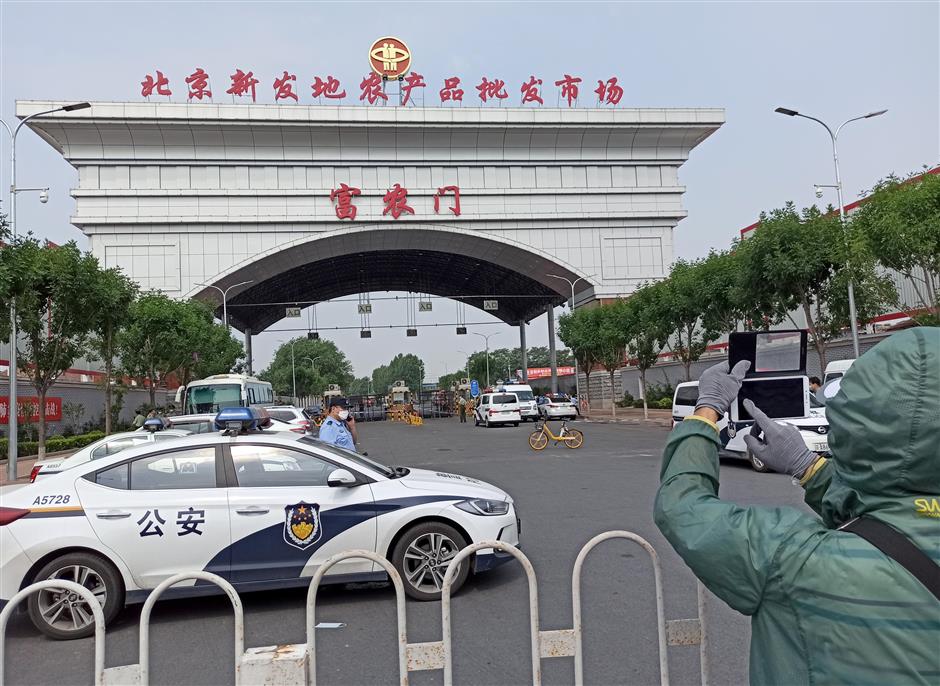 A pedestrian takes a picture of the Xinfadi market in Beijing on Saturday.

After weeks with almost no new coronavirus infections, Beijing has recorded dozens of new cases in recent days, all linked to a major wholesale food market, raising concerns about a resurgence of the disease.

There had been almost no new cases in the city for almost two months until an infection was reported on June 12, and since then the total number has climbed to 51, including eight more in the first seven hours on Sunday.

According to the city’s health authority, contact tracing showed all the infected people had either worked or shopped inside Xinfadi, said to be the largest food market in Asia, or had been in contact with someone who was there.

The market in the capital’s south Fengtai District was closed before dawn on Saturday and the district put itself on a “wartime” footing.

The Beijing outbreak has already spread to the neighboring northeastern province of Liaoning. According to the provincial health authority, the two new cases confirmed in Liaoning on Sunday were both people who had been in close contact with confirmed cases in Beijing.

At least 10 Chinese cities, including Harbin and Dalian, have urged residents not to travel to the capital or to report to authorities if they have done so recently.

Deputy director of Fengtai District Zhang Jie revealed that 8,186 swab samples had been collected from people who worked at or have been to the market, out of which 5,803 have tested negative for the virus so far.

Fengtai authorities also pledged to test all 46,000 residents living near the market. Everyone who works at Xinfadi also has to undergo testing.

According to the district official, as of 3pm on Sunday, 394 people who came into close contact with people confirmed to have the virus have been traced, 111 of them have been placed in group quarantine. The rest, who are now observing home isolation, will be moved into centralized quarantine.

Eleven hotels in Fengtai with 1,000 room capacity will be allocated for quarantine use, the official said.

Anyone who had been to or had contact with people who had been to Xinfadi since May 30 will be required to report to their work or residential units and get tested for coronavirus, said Gao Xiaojun, a spokesman for the Beijing Health Commission, on Saturday.

According to Gao, the city now has 98 qualified institutions for nucleic acid testing, with the daily testing capacity exceeding 90,000. 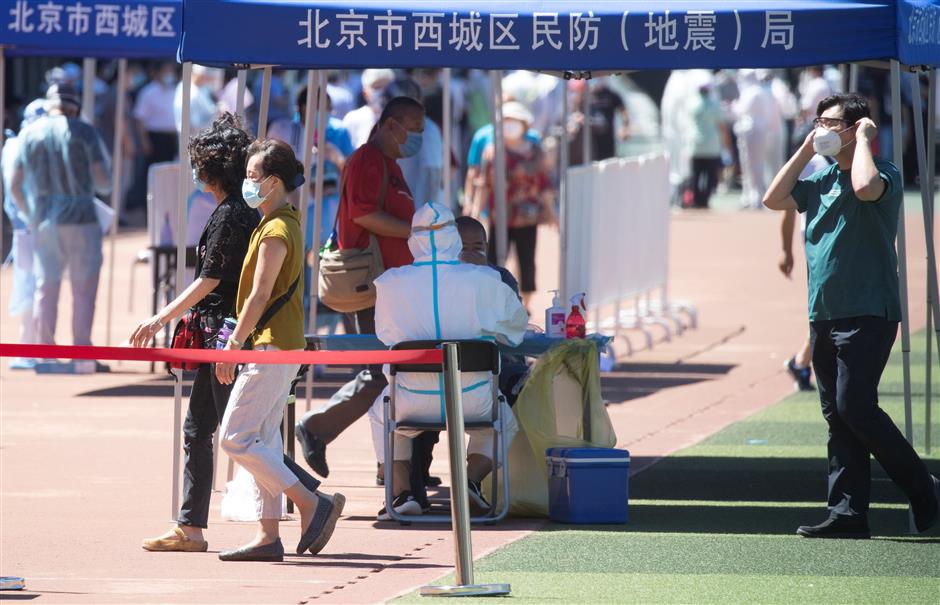 People undergo nucleic acid tests at a stadium in Beijing on Sunday.

Long queues for tests formed outside a hospital near the market on Sunday. Gao said on Sunday that anyone in the city with a fever will be given nucleic acid and antibody tests, a CT scan and a routine blood test.

Gao said that fever clinics are forbidden from turning away patients. They must monitor patient numbers and report to authorities if an abnormal surge is detected.

The official also said hospitals are required to beef up the protection of medical workers, disinfect facilities and screen medics at hospitals that have received COVID-19 patients.

Since Saturday, 11 communities near the market have entered lockdown.

City authorities have closed nine schools and kindergartens near Xinfadi, while sporting events and cross-provincial tour groups have been stopped. Beijing on Friday suspended the class resumption plan for primary schools’ lower graders scheduled for Monday.

Bus services between Beijing and some areas of neighboring Hebei Province, which were previously planned to resume on Monday, will continue to be suspended, according to the Beijing Public Transport Corporation.

A township inside the district, Huaxiang, upgraded its risk level to the highest.

As of 3pm on Sunday, 10 neighborhoods in Beijing, such as Financial Street, had raised their risk levels from low to medium. It came after Beijing lowered its emergency response to COVID-19 from the second level posture to the third level on June 6.

“Beijing will not turn into a second Wuhan, spreading the virus to many cities all over the country and needing a lockdown,” a government epidemic expert told Health Times yesterday.

Zeng Guang, former chief epidemiologist at Chinese Center for Disease Control and Prevention and currently a senior expert with the National Health Commission, predicted that the outbreak will likely be controlled after the initial spike of a few days, according to the report by Health Times.

Professor Cheng Feng with the Research Center for Public Health at Tsinghua University said people should keep high alert against the occurrence of sporadic cases, but there is no need to panic.

Like other countries around the world, China has concerns about a second wave after easing lockdowns that hammered its economy earlier this year.

An epidemiologist with the Beijing government said on Sunday that a DNA sequencing of the virus showed the latest outbreak in the market could have come from Europe.

“Our preliminary assessment is the virus came from overseas. We still can’t determine how it got here. It might have been on contaminated seafood or meat, or spread from the feces of people inside the market,” media quoted Yang Peng as saying.

Though the control measures in the Xinfadi market have temporarily affected the distribution channels, commerce authorities are stepping up efforts to coordinate market resources, and market supply in Beijing can be guaranteed, he said.

Special areas have been designated for sales of vegetables and fruits, according to a statement jointly issued early on Saturday by the market regulation bureau and the health commission of Fengtai District.

One of the first COVID-19 clusters was from a market in the central city of Wuhan that sold wild animals for meat.

The latest outbreak in Beijing has turned the spotlight on the hygiene of food supply chain.

Media have reported that the virus was detected on chopping boards used to handle imported salmon, and that major supermarkets had removed the fish from their stocks.

Beijing’s Daxing District has conducted COVID-19 sampling tests on its six farm produce markets, with the results all negative to date, local authorities said on Sunday.

The tests covered 142 environmental samples, including sewers and tools, and 50 market workers.