US consulate staff in Chengdu clear out amid tight security 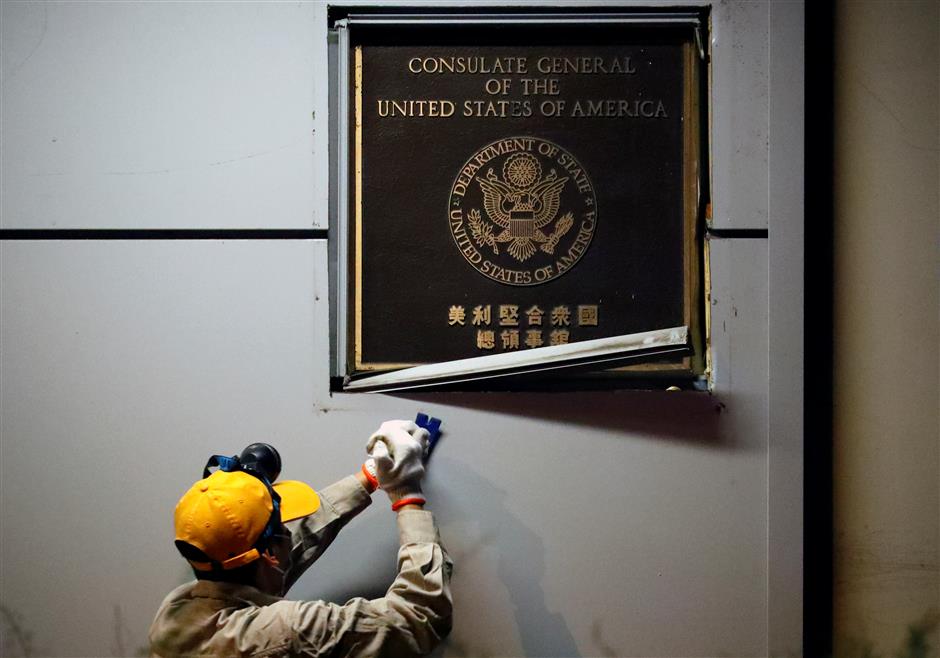 A man works to remove the consulate plaque at the US Consulate General in Chengdu, Sichuan Province, Sunday.

Staff of the US consulate in Chengdu made final efforts to clear the premises on Sunday as security remained tight outside, ahead of its closure ordered by China in response to the forced closure of Beijing’s consulate in Houston.

A coach that had been on the Chengdu consulate premises on Saturday left early Sunday. It was unclear who or what was inside. Since Friday, staff have been seen coming and going, including at least one with a suitcase. Removal vans entered and left on Saturday and Sunday.

Cleaners were seen carting large black rubbish bags from the consulate in the early hours of the morning. One of them split and appeared to contain shredded paper.

At least 10 bags were removed from the building.

Other staff were seen carrying boxes, moving trolleys and wheeled suitcases inside the building.

Workers removed the US Consulate plaque from the consulate on Sunday. A worker is seen on a small crane removing a circular US insignia from the front of the consulate, leaving just a US flag flying.

Police asked people to move on when crowds formed outside the consulate, as onlookers took photos and videos.

The street was closed to traffic, except for consular or police vehicles let through by police.

China on Friday ordered the closure of the Chengdu consulate in the southwestern province of Sichuan.

China says closing the Chengdu consulate was a “legitimate and necessary response to the unreasonable measures by the United States,” and has alleged that staff at the diplomatic mission endangered China’s security and interests.

In Houston on Friday, a group of men accompanied by a US State Department official, were seen forcing open a door at the Chinese consulate, shortly after the US closure order took effect.

“China’s response was reciprocal,” said a 63-year-old local resident who gave only his surname, Yang. The situation “is quite regrettable.”

On the Chengdu police account on Weibo, similar to Twitter, some netizens were asking the authorities to be lenient toward to a man who lit a firework outside the consulate on Friday.

“I believe our country is so powerful, so it has the ability to handle it properly, and provide me with enough safety,” said a 25-year-old finance worker surnamed Zhao when she passed by the consulate.