Xi said that over the past eight-plus months, China has fought a fierce war against the epidemic and has passed the extraordinary test of history.

He called for transforming the virus-fighting spirit into tremendous strength to build a modern socialist country and achieve national rejuvenation.

Xi made the comments during a meeting at the Great Hall of the People that was attended by about 3,000 people. The ceremony began with a minute’s silence for those who lost their lives during the pandemic.

Xi awarded the 84-year-old renowned respiratory disease expert Zhong Nanshan with a Medal of the Republic, the country’s highest honor. Three others were given the honorary title of “the People’s Hero” — traditional Chinese medicine expert Zhang Boli, Zhang Dingyu, the head of Jinyintan Hospital in Wuhan, and Chen Wei, a military medical scientist. 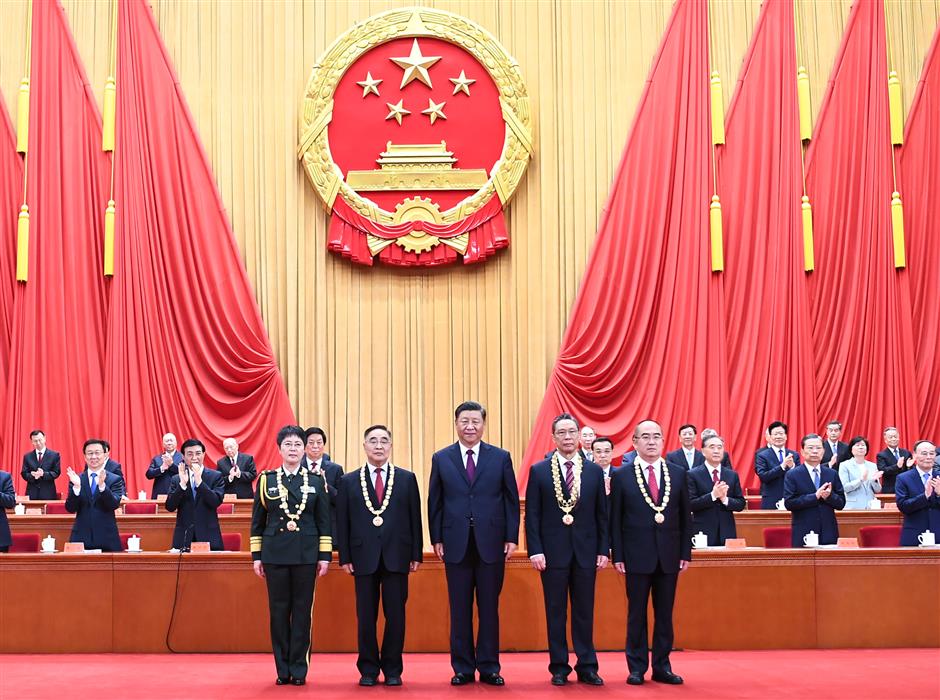 Chinese President Xi Jinping poses with the recipients of the Medal of the Republic Zhong Nanshan (second right), and “the People’s Heroes,” Zhang Boli (second left), Zhang Dingyu (right) and Chen Wei (left) after honoring them as role models in the country’s fight against the COVID-19 epidemic at the Great Hall of the People in Beijing on Tuesday.

Speaking at the event, Zhong pledged to cooperate with colleagues around the country and the world to continue working on tracing virus sources, blocking transmission routes, and developing rapid diagnosis, medicines and vaccines.

Some delegates were in tears during a series of speeches.

Speaking of the anti-epidemic battle, Xi said China has achieved another heroic feat in humankind’s fight against disease by securing major strategic achievements in the fight against the epidemic.

The country managed to contain the rapid spread of the virus in just over a month. In about two months, the daily increase in domestic coronavirus cases fell to single digits. Meanwhile, a decisive victory was secured in once the hardest-hit Chinese city of Wuhan in just about three months. Besides, the country has effectively contained sporadic outbreaks.

Xi said the CPC Central Committee had adopted “extraordinary measures” to tackle the epidemic, and had insisted on making people’s lives and health the first priority.

All-out efforts were made to ensure that not a single patient was left unattended. And the cost of treating COVID-19 patients was fully covered by the government, he added. Through a united will, the Chinese people put up a strong defense to contain the epidemic, Xi noted.

China has not reported any COVID-19 illnesses from local transmission in more than three weeks, with all of the new cases detected in that time among travelers from abroad. China has reported a total of 4,634 deaths from 85,144 cases of COVID-19. 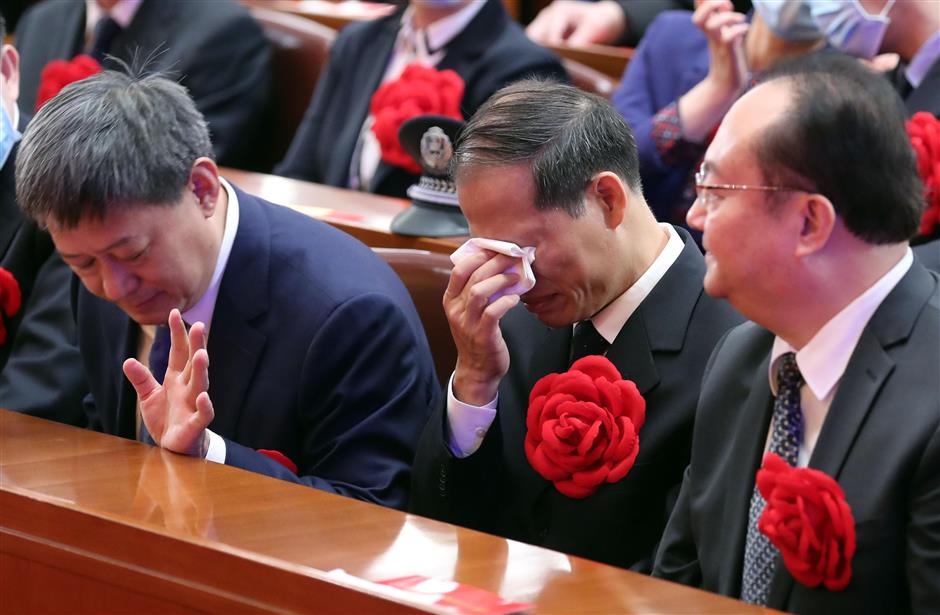 Some of the delegates at the event get emotional during speeches.

China has become the first major economy to return to growth since the pandemic, and has taken the lead in the world in both epidemic control and economic recovery, Xi said. “This has demonstrated China’s strong ability of recovery and enormous vitality,” he said.

Xi summarized the features of China’s spirit in combating the epidemic as — putting people’s lives first, nationwide solidarity, sacrifice, respecting science and a sense of mission for humanity. “We are willing to do whatever it takes to protect people’s lives!” he said.

Xi lauded the Chinese people for uniting as one and commended the heroes emerging from all walks of life amid the epidemic.

In an open, transparent and responsible manner, China gave timely notification to the international community of the onset of the epidemic, and shared without reserve its experience in containing the spread of the virus and treating the infected, said Xi.

He said China has been responsible for global public health and has launched the most intensive and wide-ranging emergency humanitarian assistance since the founding of New China. China exported 151.5 billion masks, 1.4 billion protective suits, 230 million goggles and 209,000 ventilators to support the global fight against COVID-19.

“All selfishness, scapegoating and confusing right and wrong will not only hurt a country and its people, but harm people of all countries,” Xi said. 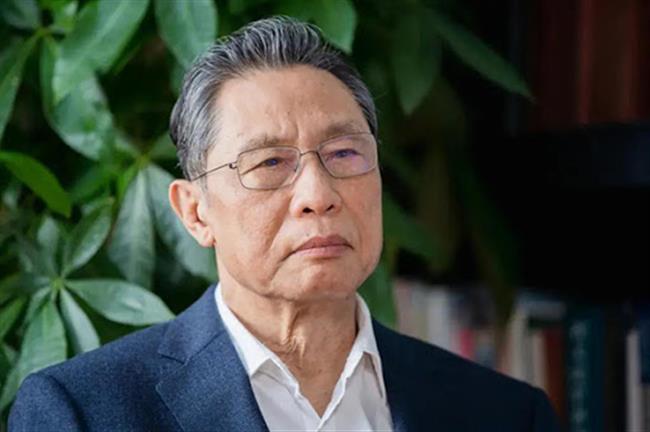 Zhong has been described as a “brave, outspoken and responsible doctor” who proposed epidemic prevention and control measures that saved numerous lives and made a great contribution to fighting both SARS and COVID-19. He publicly in January announced that the novel coronavirus was transmissible from person to person. 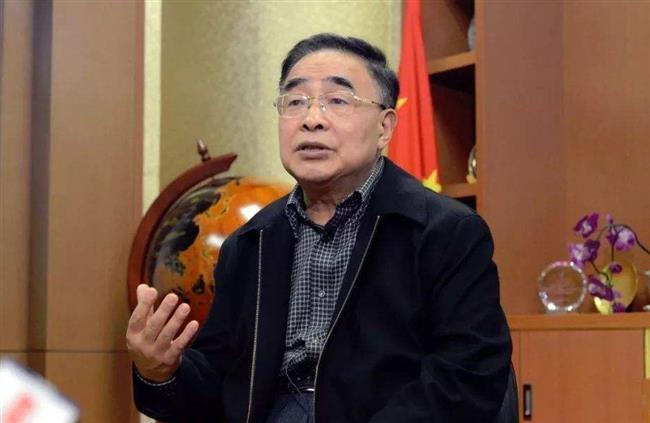 The power of TCM

Over the past few months, Zhang Boli, 72, has made the world recognize the power of Traditional Chinese Medicine by leading an expert team to treat COVID-19 infections in Wuhan.

He was given the national honorary title, “the People’s Hero” on Tuesday. Zhang, head of the Tianjin University of Traditional Chinese Medicine, arrived in Wuhan on January 27, the third day of China’s Lunar New Year and the fifth day into the megacity’s lockdown for epidemic control. He presided over the research of the COVID-19 treatment scheme combining TCM and Western medicine. 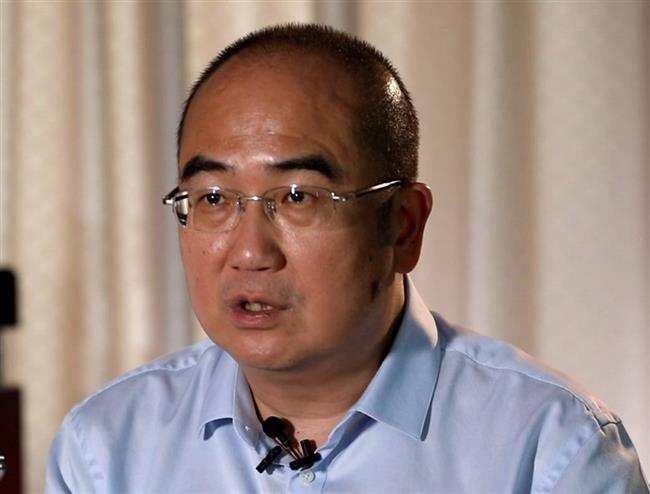 Zhang Dingyu, a 56-year-old doctor has an incurable disease. But he is a hero to many in Wuhan.

Zhang heads Wuhan Jinyintan Hospital, one of the major battlefields amid the epidemic. Having amyotrophic lateral sclerosis (ALS), he will progressively lose muscle strength, and eventually become paralyzed and unable to speak, move, swallow, or even breathe. But he and his colleagues have treated more than 2,800 COVID-19 patients, many of whom were severely and critically ill. He was one of the recipients of the national honorary title, “the People’s Hero.” 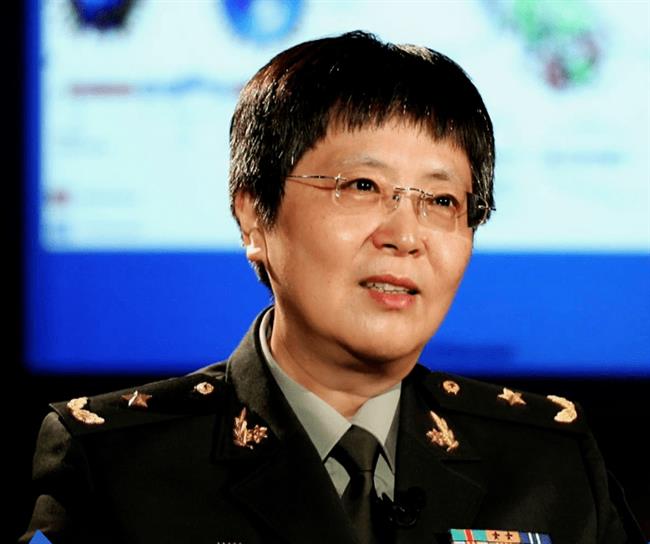 Chen Wei, the only female to be honored with “the People’s Hero” title, is a military medical scientist who made major achievements in COVID-19-related research and development of vaccine and protective medicine.

On March 16, the vaccine developed by Chen’s team started phase-1 clinical trials, the first in the world. According to the data published in the medical journal The Lancet in May, all 108 vaccinated participants produced antibodies.

In August, the vaccine was granted a patent, the country’s first patent for a COVID-19 vaccine.