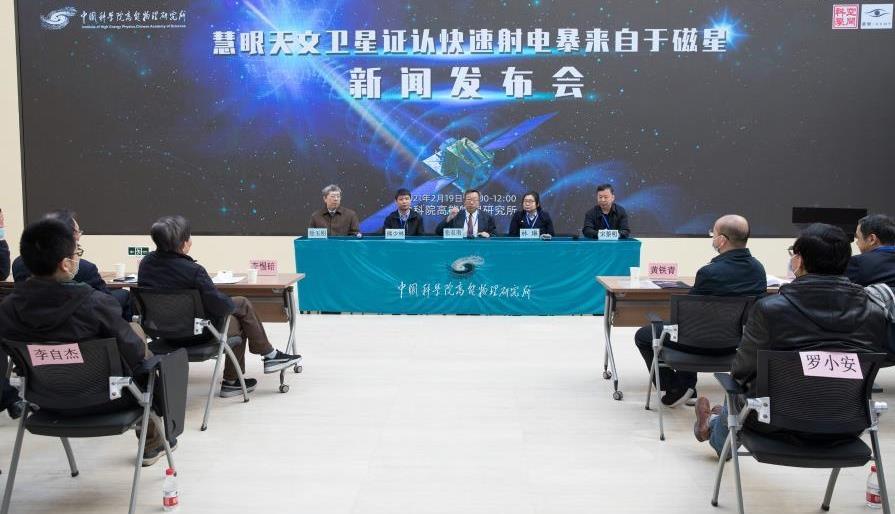 Zhang Shuangnan (C), lead scientist of China's Hard X-ray Modulation Telescope, speaks during a press conference at the Institute of High Energy Physics under the Chinese Academy of Sciences in Beijing, capital of China on February 19, 2021.

The discovery marked a milestone in understanding the nature of the mysterious signal emanating from the universe, the scientists said.

The research was conducted jointly by scientists from the Institute of High Energy Physics (IHEP) under the Chinese Academy of Sciences, Beijing Normal University, University of Nevada Las Vegas, Tsinghua University and other institutions. The findings have been published in the latest issue of Nature Astronomy.

In 2007, scientists detected bursts of extremely powerful radio waves in the sky lasting no more than a few milliseconds. The mysterious signal became known as FRBs.

Dozens of FRBs have been detected in the following decade, and astronomers have been trying to figure out what causes FRBs. Some reports even speculated that alien civilization could have been beaming FRBs to Earth.

One theory is that FRBs may come from magnetars, a type of neutron star. All neutron stars are the collapsed core of a dead star, not massive enough to become a black hole, while magnetars also have a shockingly powerful magnetic field.

Until last April, every known FRB came from outside the Milky Way, making them near impossible to study.

On April 28, 2020, two telescopes in North America, namely the Canadian Hydrogen Intensity Mapping Experiment (CHIME) and the US Survey for Transient Astronomical Radio Emission 2 (STARE2) picked up a powerful millisecond-duration burst in our Milky Way. It has since been named FRB 200428, and was listed as the top 10 breakthroughs of 2020 by both Science and Nature.

Although scientists believe that they had pinpointed the origin of FRB 200428, a final piece of the puzzle is still missing, which is needed to confirm SGR J1935+2154 produced the radio bursts.

"It is pure luck that China's space telescope caught the significant signal," said Zhang Shuangnan, lead scientist of HXMT, in an interview with Xinhua.

Zhang added that China's HXMT temporarily changed its observation plan last April to focus on SGR J1935+2154. Seven hours after the ground control sent the observation command, HXMT detected a very bright x-ray burst from SGR J1935+2154 which was about 8.6 seconds before FRB 200428.

Zhang said the time difference is consistent with the time delay of the radio signal due to the interstellar medium, indicating that the x-ray and radio bursts are from the same explosion, and it found that two spikes of the X-ray burst are the high energy counterpart of FRB 200428.

Compared with other space telescopes, HXMT provided the most detailed temporal and spectral information in understanding FRBs and magnetars, Zhang noted.

"The discovery is not the end of FRB stories, but the start of a new era," said Zhang.

The enhanced X-ray Timing and Polarimetry (eXTP) satellite developed by IHEP and many other domestic and international partner institutions, has entered phase-B (design phase), after more than 10 years of preliminary study and key technology development, he added. It will enable scientists to study FRBs, neutron stars and black holes from other galaxies.

"The universe is much stranger than we think," said Shrinivas R. (Shri) Kulkarni, George Ellery Hale Professor of Astronomy and Planetary Science at California Institute of Technology, in an interview with Xinhua via Zoom. He called on scientists to keep on exploring.

Kulkarni added that building astronomy telescopes is very expensive and no country can do astronomy all by itself, noting that China's telescopes like FAST and HXMT have become driving engines for new discoveries.

"I am very happy for my Chinese colleagues that your government is supporting basic science. This is very exciting that a large country like China is contributing enormously to modern science," he said.

Since its launch on June 15, 2017, HXMT has achieved a series of important scientific results on black holes, neutron stars and other objects or phenomena. The calibration of the detectors on board was supported by the National Institute of Metrology, Ferrara University in Italy and the Max Planck Institute for Extraterrestrial Physics.