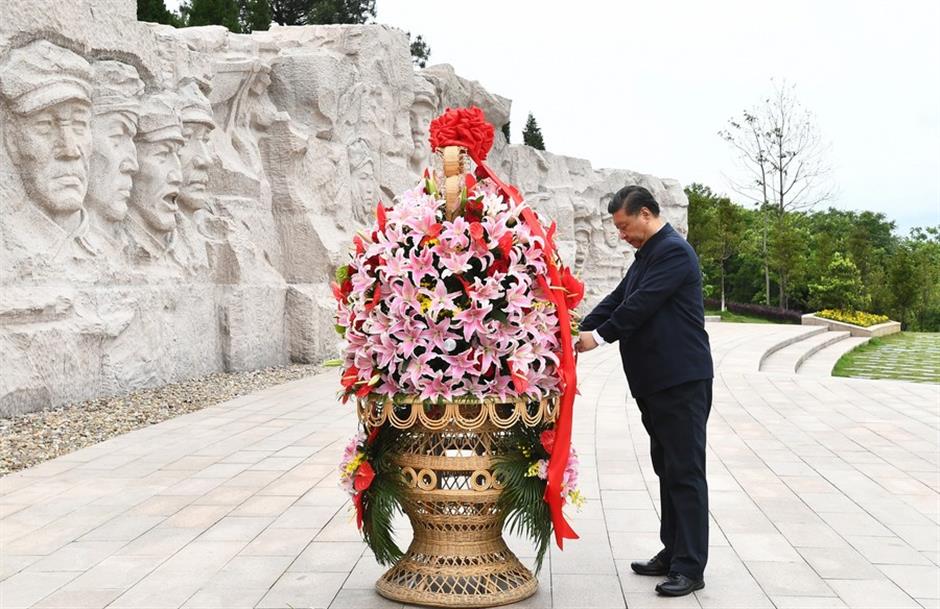 Chinese President Xi Jinping, also general secretary of the Communist Party of China Central Committee and chairman of the Central Military Commission, visits a memorial park dedicated to the Battle of the Xiangjiang River during the Long March in the 1930s, and lays a flower basket in homage to Red Army soldiers who died in the battle, in Caiwan, a town in Quanzhou County in the city of Guilin, south China's Guangxi Zhuang Autonomous Region on April 25, 2021.

Xi, also general secretary of the Communist Party of China (CPC) Central Committee and chairman of the Central Military Commission, made the remarks during his inspection trip to south China's Guangxi Zhuang Autonomous Region from Sunday to Tuesday.

Xi called on these regions to better serve and integrate into the country's new development pattern, make new progress in advancing green development, and be more committed to consolidating and developing ethnic unity, social stability and border security.

During his inspection tour, Xi went to Guilin, Liuzhou and Nanning, visiting a local revolutionary memorial, ethnic museum, villages and enterprises to inspect the localities' work in implementing the country's 14th Five-Year Plan.

On Sunday morning, Xi visited a memorial park dedicated to the Battle of the Xiangjiang River during the Long March in the 1930s in the city of Guilin. He presented a flower basket in memory of the martyrs in the battle and made three bows in their honor.

Noting that the battle was a life-or-death event in China's revolution history, Xi stressed the importance of CPC members staying true to their ideals and convictions.

Xi then visited Maozhushan village in Guilin to inspect the local grape growing industry. He called for efforts to pursue rural vitalization based on local specialty industries and make better use of science and technology in promoting the agricultural sector.

He also stressed measures that can ensure farmers benefit more from the development of rural industries. 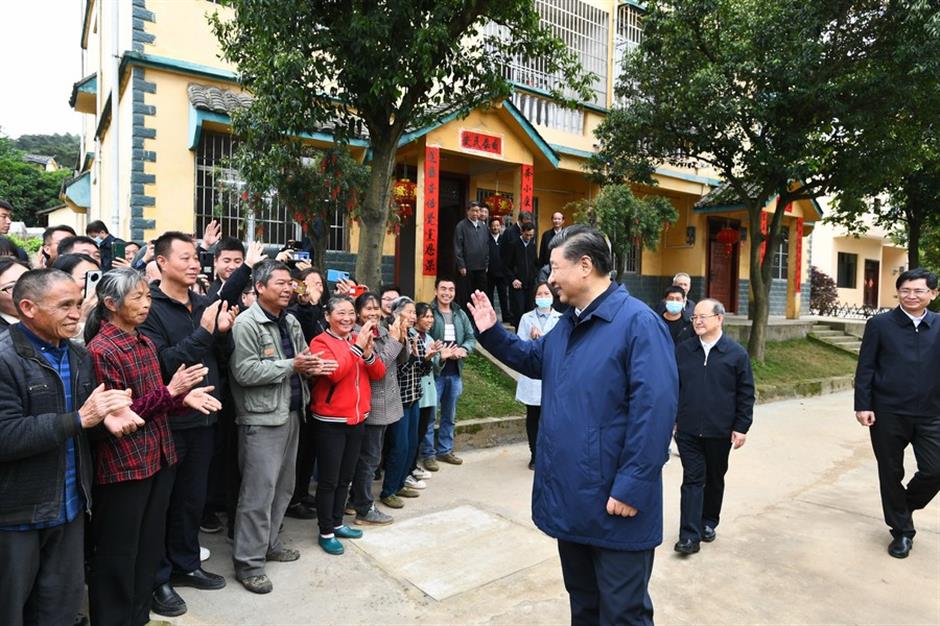 Chinese President Xi Jinping, also general secretary of the Communist Party of China Central Committee and chairman of the Central Military Commission, waves to villagers while visiting Maozhushan village of Caiwan, a town in Quanzhou County in the city of Guilin, south China's Guangxi Zhuang Autonomous Region on April 25, 2021.

Xi walked through the village, dropping by the home of villager Wang Deli and chatting with the family.

He said that as the CPC is about to celebrate its centenary, the country has scored a complete victory in its fight against poverty. However, he said promoting rural vitalization on all fronts will be no easier than the anti-poverty battle, allowing no letup or sluggishness.

On Sunday afternoon, Xi went to a dock on the Lijiang River in the city of Guilin. He called for more efforts in ecological restoration and pollution prevention and control to improve the environment, the ecosystem, and the overall function of the river basin.

On Monday, Xi visited a scenic park in Guilin. He lauded the city as a treasure bestowed on the Chinese nation by nature and called for efforts to improve its protection.

He urged efforts to keep a firm hold on the initiative in pursuing innovation-driven development and uphold the overall leadership of the Party in state-owned enterprises.

Xi then went to a food-processing zone for local specialty Luosifen rice noodles. He praised the role of local signature industries in developing the real economy and called for more support for private enterprises to help them grow and tackle challenges.

On Tuesday morning, Xi visited the Anthropology Museum of Guangxi in the regional capital city of Nanning.

As the country's demonstration zone of ethnic unity and progress, Guangxi should continue to play its exemplary and leading role, Xi said.

In the morning, Xi also heard the regional Party committee and government of Guangxi report their work.