A man whose wildly popular short video featuring him speaking Cantonese and urging people to take a tea break is a Singapore marine technician.

According to Lianhe Zaobao, the largest Chinese-language newspaper in Singapore, the man is Gurdip Singh, 54, who was born in Malaysia, moved to Singapore at 16 and has lived there for 39 years.

In the video, Singh, wearing a pair of brown glasses, holds a bag of milk tea and keeps telling people to take a tea break.

"It's three o'clock. Drink tea first!" Singh yells in the video. "It's useless to work so hard. You boss won't care about you!"

Singh made the 15-second video in March last year. It went viral after it was uploaded onto Bilibili, China's video-sharing website, on April 26 this year. The video has now reached about 3.8 million views.

The sentence, "It's three o'clock. Drink tea first!" has since become a meme on China's social media, with thousands of videos using the meme being made by netizens one after another.

He is a marine technician, whose job includes repairing and maintaining ships.

Gurdip Singh says people like to call him Elvis.

"People like to call me Elvis because they said I look like Elvis Presley," Singh said, adding that he had been to Hong Kong but never to China's mainland.

"If I have an opportunity, I will definitely visit the mainland. Hope you guys can recommend some nice places," Singh said in a video interview with Lianhe Zaobao.

Singh has a YouTube account called Elvis Robin, but it only has 437 subscribers. Most of his videos only have views from dozens to hundreds. 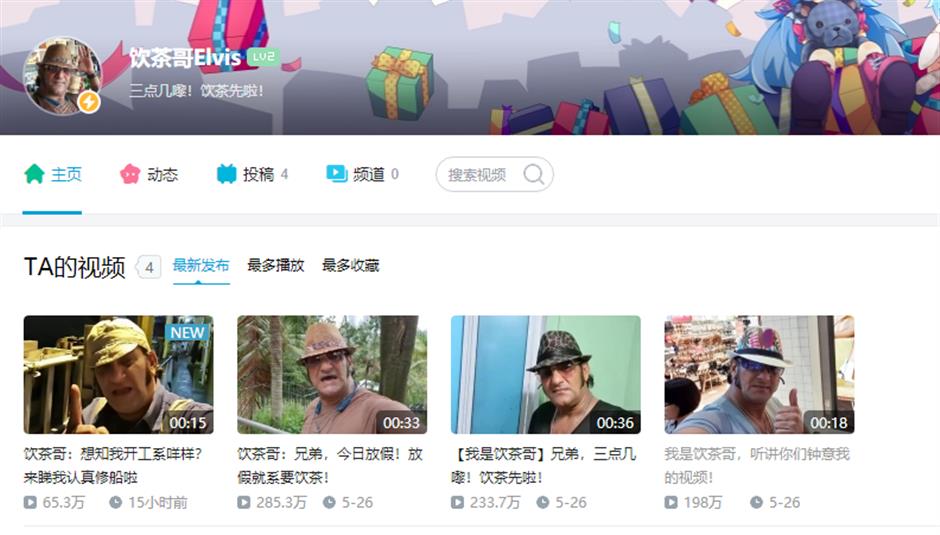 In contrast, shortly after he opened his account on Bilibili, which goes by the name 饮茶哥Elvis (Brother Drinking Tea Elvis), Singh has more than 300,000 followers. The views of his four videos there range from about 630,000 to over 2.8 million.

Netizens were impressed by his language ability.

"He speaks better Cantonese than I do. I'm from Guangdong Province," said netizen wangzherongyaoshiliuye on Bilibili.

Others appreciated his attitude toward life.