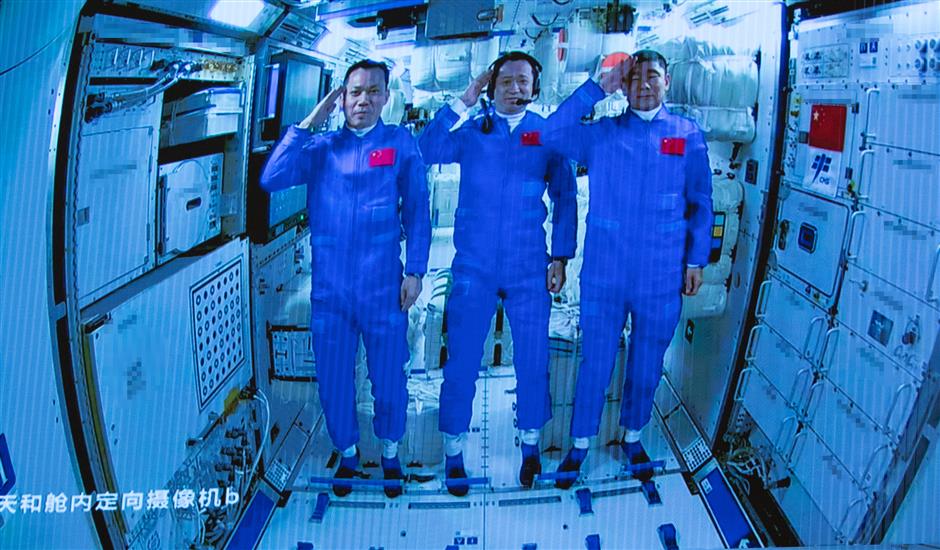 Three Chinese astronauts aboard the Shenzhou-12 spaceship have entered the country's space station core module Tianhe, where they will work on the in-orbit construction of the station over three months.

The spaceship, atop a Long March-2F carrier rocket, was launched from the Jiuquan Satellite Launch Center in northwest China's Gobi Desert at 9:22am yesterday. About 573 seconds after the launch, Shenzhou-12 separated from the rocket and entered its designated orbit.

The Shenzhou-12 crew is in good shape and the launch is a complete success, the China Manned Space Agency declared.

At 3:54pm, the spaceship, measuring about 9 meters in height and around 8 tons in weight, completed orbital status setting after entering the orbit and conducted a fast autonomous rendezvous and docking with the front docking port of Tianhe, forming a three-module complex with the cargo craft Tianzhou-2.

It is China's seventh crewed mission to space and the first during the construction of China's space station.

It is also the first in nearly five years after the country's last manned mission.

The three astronauts are commander Nie Haisheng, a 56-year-old veteran who participated in the Shenzhou-6 and Shenzhou-10 missions, Liu Boming, 54, who was part of the Shenzhou-7 mission, and Tang Hongbo, 45, who is on his first space mission.

The Shenzhou-12 spaceship atop a Long March-2F carrier rocket was launched from the Jiuquan Satellite Launch Center in northwest China's Gobi Desert at 9:22am yesterday.

By 6:48pm, Nie Haisheng, Liu Boming and Tang Hongbo had entered the Tianhe module one by one, signifying that for the first time the Chinese have entered their own space station, the CMSA said.

The Tianhe module will be their 'home in space.' They will stay in orbit for three months, setting a new record for China's manned space mission duration. The current 33-day record was kept by the Shenzhou-11 crew in 2016.

The work for the Shenzhou-12 astronauts will be more complicated and challenging than previous crewed missions, according to CMSA director Hao Chun.

The Shenzhou-12 crew will complete four major tasks in orbit, said Ji Qiming, assistant to the CMSA director, said at the launch center on Wednesday.

First, they will operate and manage the complex, including the in-orbit test of the Tianhe module, verification of a variety of subsystems and equipment. Second, they will perform two extravehicular activities (EVAs) for assembling and installing. Third, they will carry out space science experiments and technology experiments, as well as public outreach activities. Fourth, they will manage their own health through daily life care, physical exercise, and regular monitoring and assessment of their own health status.

China launched its space station core module Tianhe on April 29 and cargo craft Tianzhou-2 on May 29. The two completed a computer-orchestrated rendezvous and docking on May 30, waiting for the first crewed mission to unpack the cargo.

According to the China Academy of Space Technology, more than 160 large and small packages, including supplies for astronauts and space-science equipment, were delivered by Tianzhou-2.

Hao noted that it is a critical technology for a long-term crewed mission to guarantee the astronauts' life and work in space.

Meanwhile, EVAs will be more and more common for astronauts in later missions for the space station construction, posing new challenges for them, Hao added.

He said that EVAs will be a comprehensive assessment of the technologies in EVA spacesuits and supporting systems, the EVA procedures, as well as the astronauts' operation, commanding and coordination.

According to Hao, the two EVA spacesuits for this mission have been improved to enable more complicated and longer-duration operations, and a variety of equipment inside and outside Tianhe, including a mechanical arm, will also support the spacewalk.

"After passing the assessment, we will be more proficient and experienced in EVAs. In the following missions, EVAs will be regular work that must be done," he said.

Liu Weibo, deputy chief designer of the astronaut system of China's manned space program, said that the improved spacesuits, both designed and developed by Chinese engineers, can enable astronauts to have EVAs for seven to eight hours. 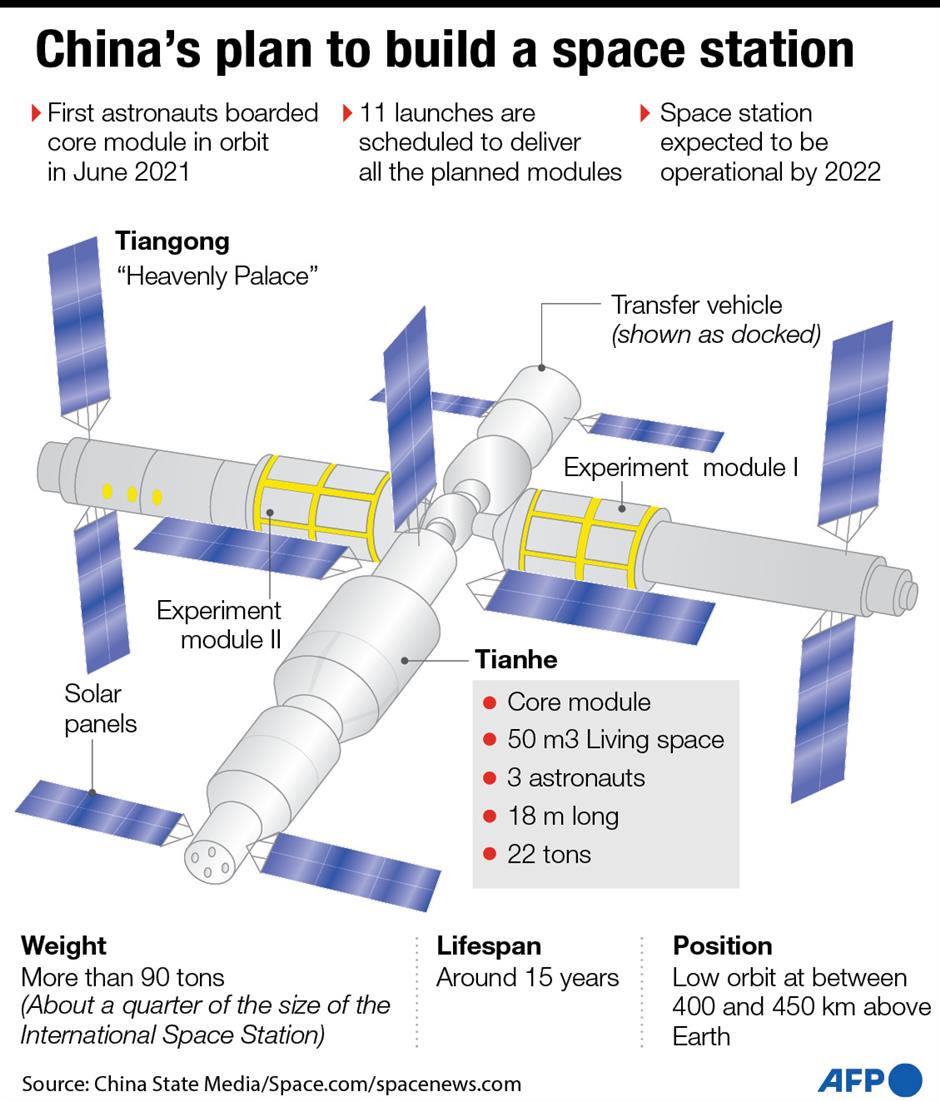 The Tianzhou-3 cargo craft and the Shenzhou-13 manned spaceship will also be launched later this year to dock with Tianhe, and another three astronauts will then begin their six-month stay in orbit, according to the CMSA.

After the five launch missions this year, China plans to have six more missions, including the launch of the Wentian and Mengtian lab modules, two cargo spacecraft and two crewed spaceships, in 2022 to complete the construction of the space station.

The total length of the core module is 16.6 meters, around the height of a five-story building. With a maximum diameter of 4.2 meters, it is more spacious than a train or subway carriage, providing astronauts with six zones for work, sleep, sanitation, dining, healthcare and exercise.

Every astronaut will have their designated sleeping area and toilet. Treadmills, spin bikes and resistance expanders will help them exercise to maintain physical health.

Astronauts will use a device called the neuromuscular electrical stimulator to stimulate the nerves in muscles in order to restore function and strength and prevent muscle atrophy. Experts on the ground can adjust the device according to the status of the astronauts.