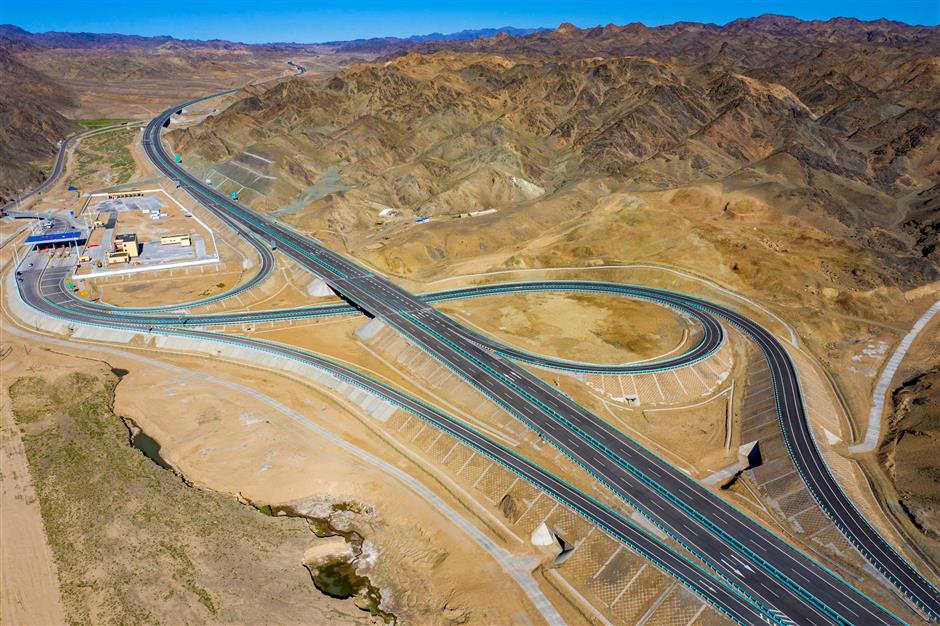 The Beijing-Urumqi Expressway, the longest desert-crossing expressway in the world, fully opened to traffic on Wednesday after the last section of the route in northwest China's Xinjiang Uygur Autonomous Region was put into operation.

The expressway linking Beijing and Urumqi, the regional capital of Xinjiang, has a total length of 2,800 km, with over 500 km passing through desert and no man's land.

In addition to Beijing and Xinjiang, the expressway passes through four other provincial-level regions: Hebei, Shanxi, Inner Mongolia and Gansu in north China.

It cuts the driving distance between Urumqi and Beijing by more than 1,300 km, making it the fastest road to cross north China, according to Cao Shouhua, a researcher with the Research Institute of Highway, a think tank under the country's transport ministry.

It is also the fastest land route from Tianjin Port in north China to Rotterdam Port in the Netherlands, facilitating exchanges along the Belt and Road.

Sections of the expressway in other provincial-level regions are already in operation. Due to its harsh natural environment and complex geological conditions, the section in Xinjiang was the last to be completed, taking approximately four years.

The Xinjiang section passes through varied landscapes, including the Gobi desert and grasslands. "It was no easy work," said Long Xing, general manager of the Xinjiang section's major developer, affiliated with the China Railway Construction Corporation.

In addition to extreme temperatures ranging from over 40 degrees Celsius to below minus 40 degrees Celsius, workers had to deal with sandstorms, snowstorms, and a lack of stable telecommunication signals, among other difficulties, Long added.

The Xinjiang section crosses many areas rich in wildlife, and developers have managed to reduce the project's impact on local wildlife as much as possible.

A total of 62 animal passages have been built throughout the section, according to Wang Xiaozhi, the section's chief designer. The design of a three-layer passage has been specifically developed to simultaneously enable the uninterrupted passage of trains, animals and road vehicles.

The three-layer passages have cost an additional 120 million yuan (about 18.6 million US dollars), but Wang believed that was worthwhile. "We should not impede wildlife's path while building our own."

Locals living along the expressway are the biggest beneficiaries, as easier and faster transport will stimulate local economic vitality.

Delida Yerken, a resident of the Kazak Autonomous County of Barkol in east Xinjiang, said she expects booming tourism in her hometown, with an increased inflow of tourists brought by the first expressway to pass Barkol.

"I'm also planning for a family road trip to Beijing and other cities along the expressway during the holidays," she said. "It brings us closer to other areas."