More than 500 pieces of relics have been discovered in recent months at the legendary Sanxingdui Ruins site in southwest China's Sichuan Province, dazzling archaeologists with their historical value as well as the display of creativity and ingenuity.

The relics, discovered at the six new sacrificial pits of the ruins, include golden masks, jade and ivory artifacts and bronze wares that were exquisitely built and uniquely shaped, said the Sichuan Provincial Cultural Heritage Administration on Thursday.

The new finds bring the total number of items discovered at Sanxingdui to nearly 2,000 after the excavation of No.3 to No.8 sacrificial pits began in October last year.

"The new discoveries demonstrate once again that imagination and creativity of the ancient Chinese far surpassed what people today had expected," said Tang Fei, chief of the Sichuan Provincial Cultural Relics and Archaeology Research Institute.

Tang added that the excavation of the new pits has entered a critical stage, with more items yet to be unearthed and expected to defy the conventional wisdom of archaeologists.

Originally discovered in the late 1920s, the Sanxingdui Ruins have been dubbed as one of the world's greatest archaeological finds of the 20th century.

Located in the city of Guanghan, around 60 km from the provincial capital Chengdu, the ruins covering an area of 12 square km are believed to be the remnants of the Shu Kingdom, dating back some 4,500 to 3,000 years.

While overseeing the excavation work, the Sichuan Provincial Cultural Heritage Administration is also coordinating with top archaeologists in the country to restore the relics and conduct research on their historical value, after which the relics will be exhibited in museums. 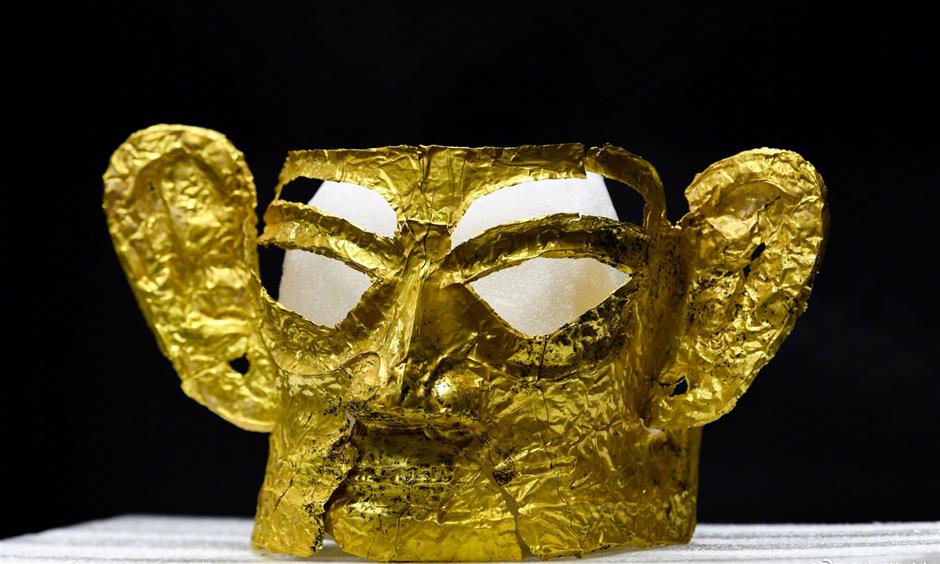 A highlight of the new finds is a golden mask that was unearthed in mid-June in the No.3 sacrificial pit.

When unearthed, the mask looked like a piece of scrunched paper and its shape was difficult to discern. After restoration work that took less than a week, a complete golden mask was unveiled.

Weighing about 100 grams, the mask is 37.2 cm wide and 16.5 cm high, with hollow eyes and eyebrows, round ears, a high nose, and a large and slightly open mouth. The formidable-looking golden mask is by far the most complete mask unearthed at Sanxingdui.

"It depicts the 'god' of all worshipers at Sanxingdui," said Ran Honglin, a researcher with Sichuan Provincial Cultural Relics and Archaeology Research Institute.

"The facial features and size of the gold foil mask are similar to those of the bronze heads unearthed before," said Ran. "We figure that the mask was used to cover the bronze head, as opposed to being a stand-alone artifact."

In terms of craftsmanship, Ran said that the mask has not been remelted or recast. "Gold is very malleable. It can be hammered into thin sheets and then inlaid into the desired shape," he added. 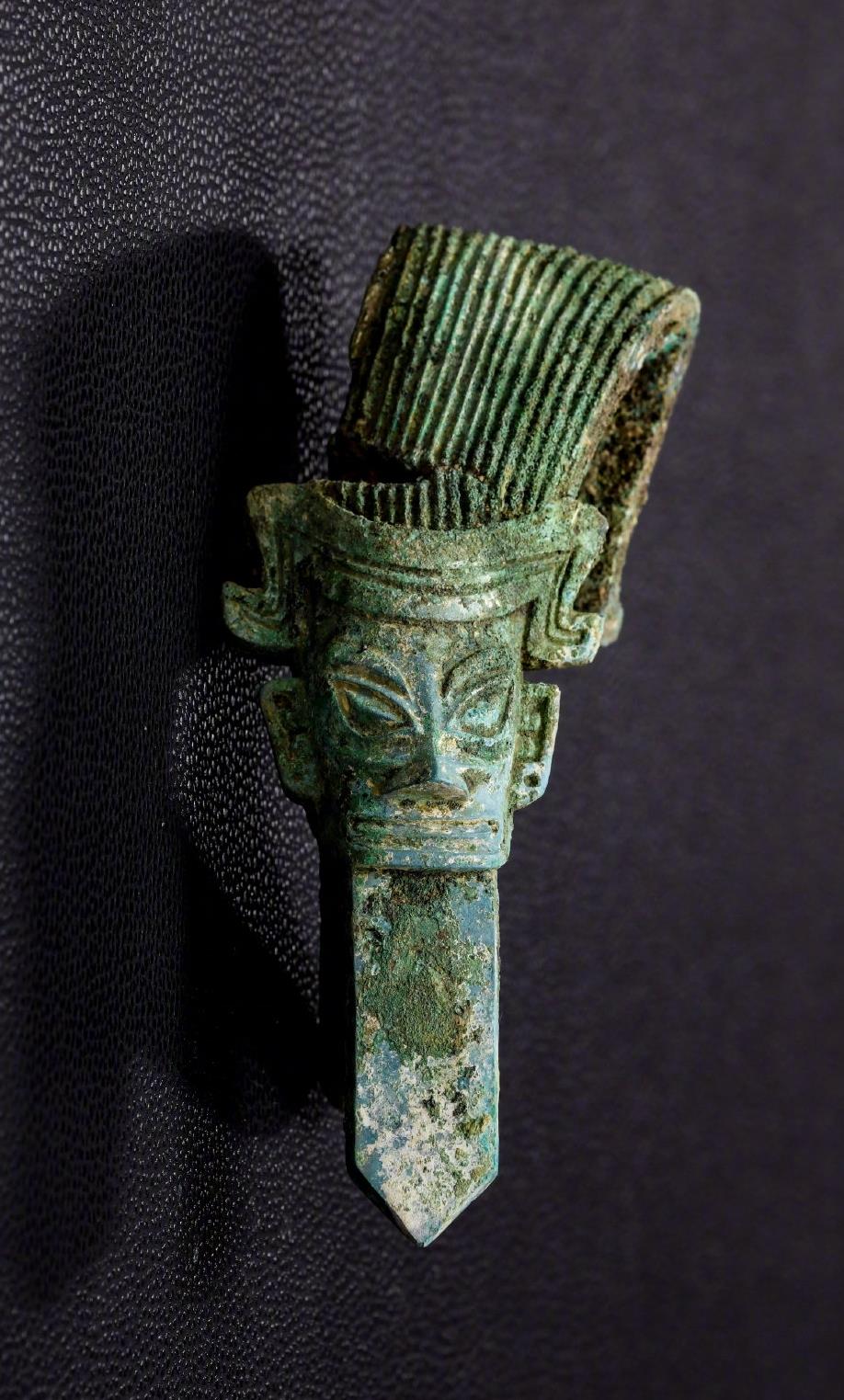 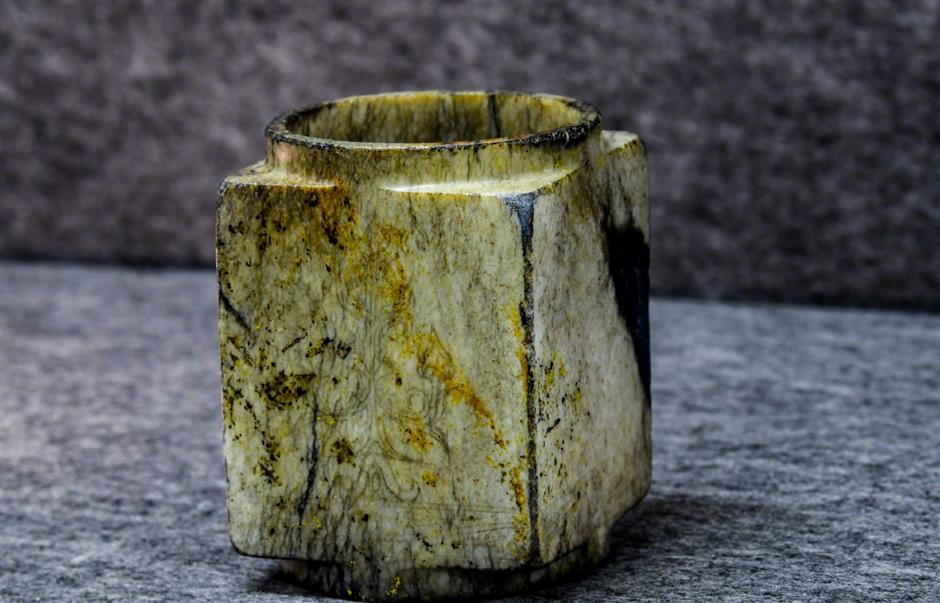 Some of the bronze wares discovered during the current excavation had never been seen elsewhere in China, nor have they been recorded in the world's history of bronze wares, according to archaeologists.

"They are so unique that even we don't know how to name them," said Zhao Hao, an associate professor with Peking University, who oversees the excavation of the No.8 pit.

For instance, a bronze altar was found in the No.8 pit. On it stand bronze figures in various sizes and poses. Some are dancing in colorful gowns. Some are carrying sacrificial offering on their shoulders, with tattoos on their calves. There is also a collar-wearing mythical creature in the scene.

"The complexity of the item is eye-opening. The altar depicts the scene of a sacrificial ritual, presenting people's understanding of the whole world," Zhao said.

Another altar discovered in the No.3 pit looks very different, with heads, dragons and unidentified animals on it. With no handy names, experts simply call it "peculiar" for now.

"It's just peculiar. I've never seen anything so unorthodox before," said Xu Feihong, a lecturer at Shanghai University who oversees the excavation of the No.3 pit.

"However, the craftsmanship, form and content of these cultural relics are very complex and rich in archaeological information," Xu added. "They have defied our previous understanding of bronze wares and posed great challenges to our research."

During excavation, archaeologists also found some items that seemed misplaced in time. One bronze head, for instance, bears a striking resemblance with the Japanese fictional superhero Ultraman, and a jade knife looks almost identical in shape and size to the ones used today.

"You can directly put the knife on a dinner table serving Western cuisine without it looking out of place," said Li Haichao, an expert with Sichuan University. 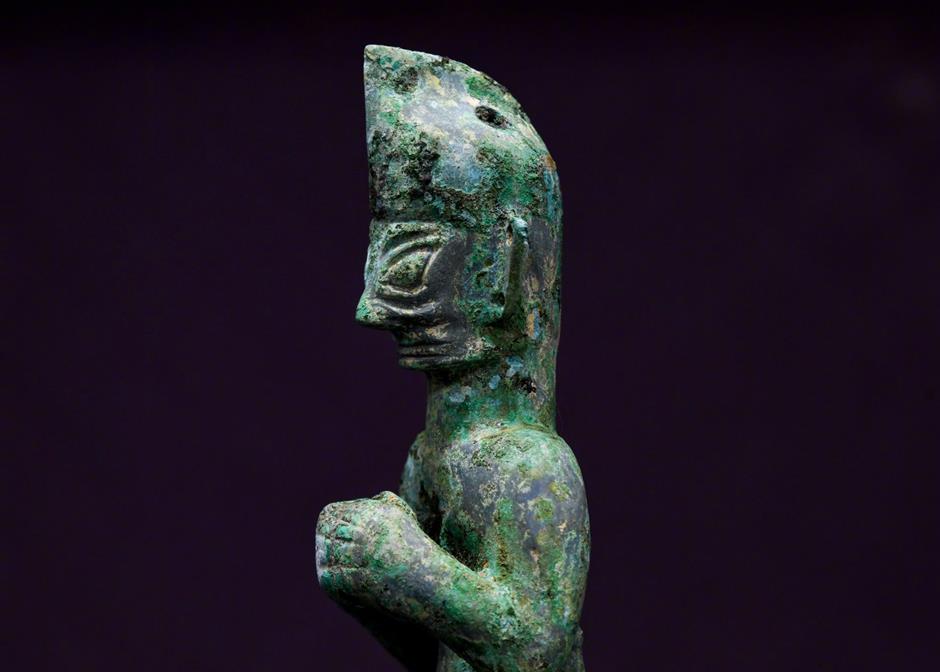 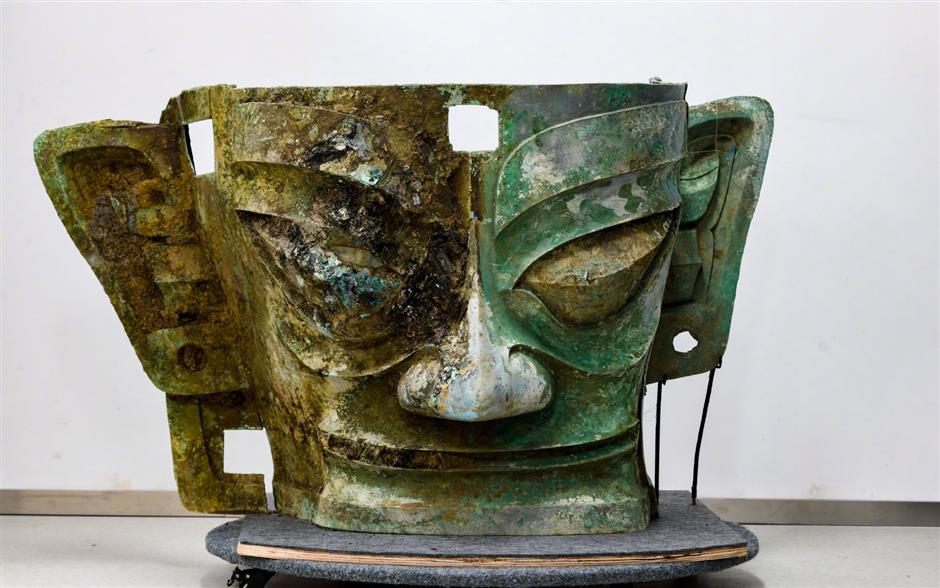 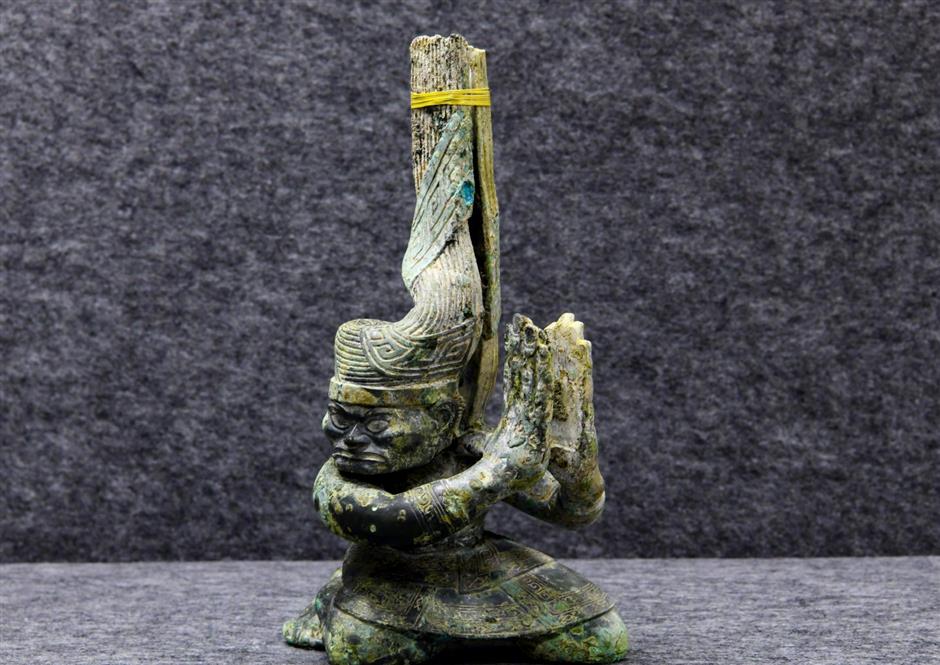 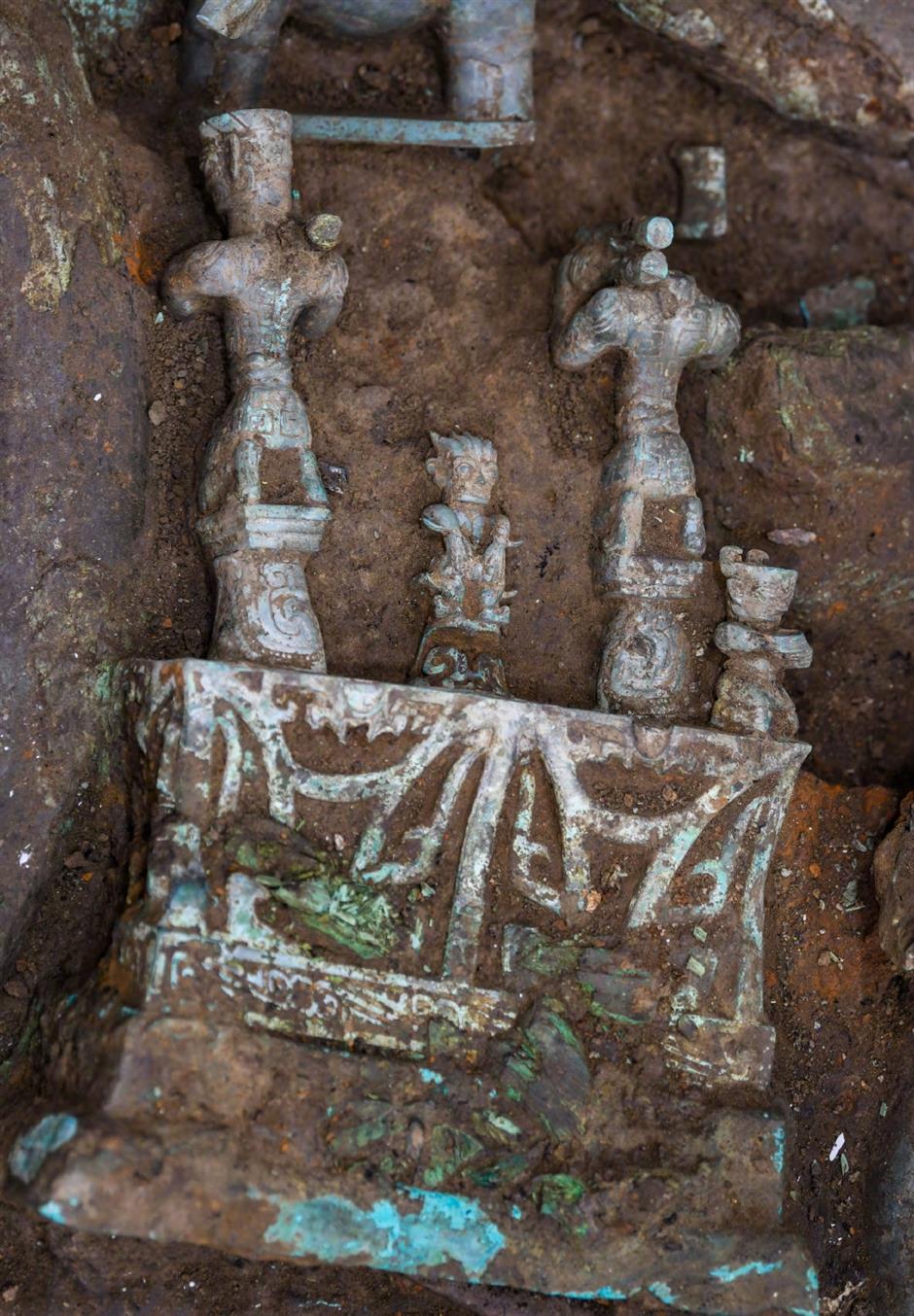