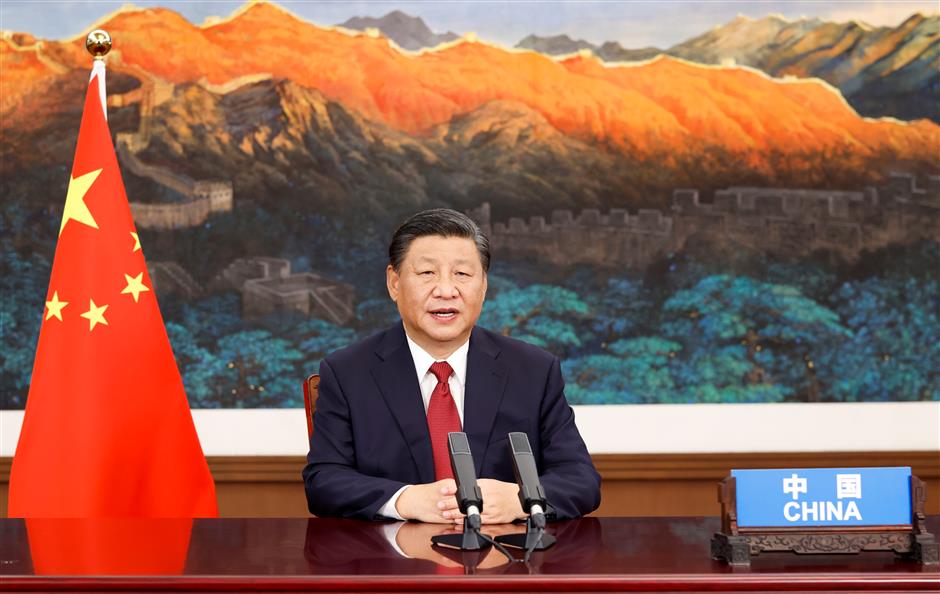 Chinese President Xi Jinping addresses the general debate of the 76th session of the United Nations General Assembly via video, in Beijing, capital of China, on September. 21, 2021.

Chinese President Xi Jinping on Tuesday proposed a Global Development Initiative, calling for bolstering confidence and jointly addressing global threats and challenges to build a better world for all.

Xi made the remarks at the general debate of the 76th session of the United Nations General Assembly (UNGA) via video, as the world faces the combined impacts of changes unseen in a century and the COVID-19 pandemic.

Right now, COVID-19 is still raging in the world, with the number of new cases rising every day globally. "We must beat COVID-19 and win this decisive fight crucial to the future of humanity," Xi said, voicing confidence that "we humanity will surely overcome it and prevail" despite the fact that the COVID-19 pandemic may appear overwhelming.

He called for putting people and their lives first, taking a science-based approach in origins tracing, enhancing coordinated global COVID-19 response and minimizing the risk of cross-border virus transmission.

Noting that vaccination is a powerful weapon against COVID-19, Xi said the pressing priority is to ensure the fair and equitable distribution of vaccines globally.

The role of China is even more critical at a time when some countries have adopted a selfish strategy of vaccine nationalism and even put restrictions on export of COVID-19 vaccines and other medical supplies, said Nadeem Irfan Bukhari, a professor from University of the Punjab, Pakistan.

"Development holds the key to people's well-being," Xi said, adding that countries need to work together to steer global development toward a new stage of balanced, coordinated and inclusive growth.

"We need to increase input in development, advance on a priority basis cooperation on poverty alleviation, food security, COVID-19 response and vaccines, development financing, climate change and green development, industrialization, digital economy and connectivity, among other areas, and accelerate implementation of the UN 2030 Agenda for Sustainable Development, so as to build a global community of development with a shared future," he said.

To support developing countries in responding to COVID-19 and promoting economic and social recovery, China has pledged an additional three billion US dollars of international assistance in the next three years.

China will not build new coal-fired power projects abroad, he said, pledging that the country will step up support for other developing countries in developing green and low-carbon energy.

"This is another remarkable step taken by China on its own initiative to cope with the global climate change, as Xi earlier announced China's pledge to strive to peak carbon dioxide emissions before 2030 and achieve carbon neutrality before 2060," said Ruan Zongze, executive vice president of the China Institute of International Studies.

"We need to advocate peace, development, equity, justice, democracy and freedom, which are the common values of humanity, and reject the practice of forming small circles or zero-sum games," Xi said.

Democracy is not a special right reserved to an individual country, but a right for the people of all countries to enjoy, the Chinese president stressed.

Ruan said that some countries are keen to gang up in the name of democracy, wantonly interfering in other countries' internal affairs and even arbitrarily suppressing normal development of other countries and people's legitimate right to live better lives.

"Recent developments in the global situation show once again that military intervention from the outside and so-called democratic transformation entail nothing but harm," Xi said.

He called for building a new type of international relations based on mutual respect, equity, justice and win-win cooperation, and doing the best to "expand the convergence of interests" and "achieve the biggest synergy possible."

"One country's success does not have to mean another country's failure, and the world is big enough to accommodate common development and progress of all countries," he said, adding that differences and problems among countries need to be handled through dialogue and cooperation on the basis of equality and mutual respect.

This year marks the 50th anniversary of the restoration of the lawful seat of the People's Republic of China in the United Nations. Xi said China will solemnly commemorate this historic event and advance cooperation with the UN to a new level and make new and greater contributions to promoting the noble cause of the UN.

"The UN should hold high the banner of true multilateralism and serve as the central platform for countries to jointly safeguard universal security, share development achievements and chart the course for the future of the world," Xi stressed.

Ruan said that some countries claimed to safeguard "the rules-based international order" under the banner of multilateralism, yet what they actually did was framing their own rules as international rules and imposing them on other countries.

The Chinese president called on the UN to increase the representation and say of developing countries in international affairs, and take the lead in advancing democracy and rule of law in international relations.

"It should set common agenda (in the areas of security, development and human rights), highlight pressing issues and focus on real actions, and see to it that commitments made by all parties to multilateralism are truly delivered," he added.