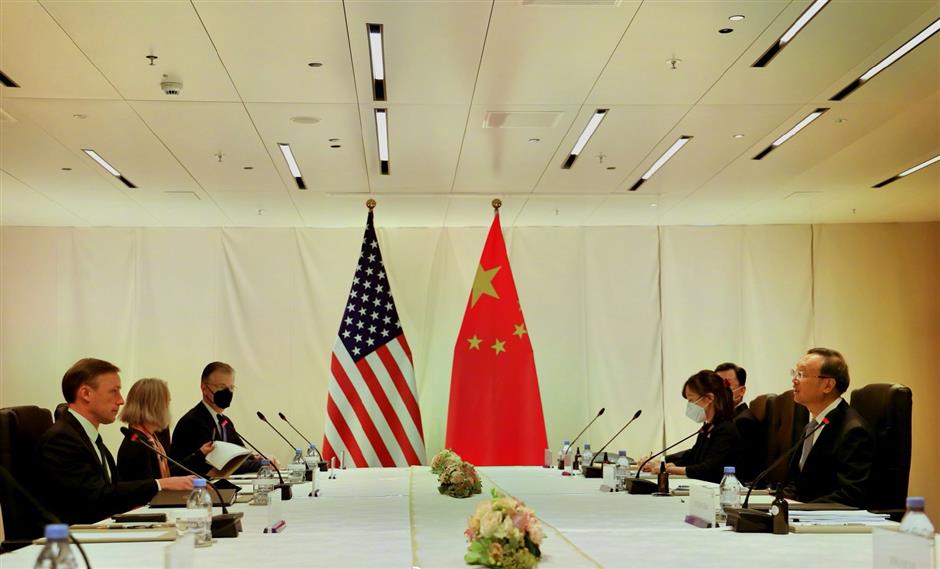 Yang Jiechi (first right), a member of the Political Bureau of the Communist Party of China Central Committee, met on Wednesday with US National Security Adviser Jake Sullivan (first left).

Yang Jiechi, a member of the Political Bureau of the Communist Party of China Central Committee, met on Wednesday with US National Security Adviser Jake Sullivan.

The two sides, in a candid manner, had a comprehensive and in-depth exchange of views on China-US relations as well as international and regional issues of common concern. The meeting was described as constructive, and conducive to enhancing mutual understanding.

The two sides agreed to take action, following the spirit of the phone call between Chinese and US heads-of-state on September 10, strengthen strategic communication, properly manage differences, avoid confrontation and conflict, seek mutual benefit and win-win results, and work together to bring China-US relations back to the right track of sound and steady development.

Yang said that whether China and the United States can handle their relations well bears on the fundamental interests of the two countries and two peoples, as well as the future of the world.

Yang said that China attaches importance to the positive remarks on China-US relations made recently by US President Joe Biden, and China has noticed that the US side said it has no intention to contain China's development, and is not seeking a "new Cold War."

China hopes the US side could adopt a rational and pragmatic China policy, and, together with China, follow a path of mutual respect, peaceful coexistence and win-win cooperation, with respect for each other's core interests and major concerns.

During the meeting, Yang expounded China's solemn position on issues related to Taiwan, Hong Kong, Xinjiang, Tibet and human rights as well as on maritime issues, urging the United States to truly respect China's sovereignty, security and development interests, and stop using the above issues to interfere in China's internal affairs.

The US side expressed its adherence to the one-China policy.

The two sides agreed to maintain regular dialogue and communication on important issues.