The conference was themed "Mutual Learning Among Civilizations: Jointly Building a Community with a Shared Future for Mankind." Nearly 500 Chinese and foreign politicians, notable scholars, representatives from international organizations and enterprise leaders congregated to brainstorm perspectives on these topics both online and offline.

The conference is designed to promote dialogue and exchange among populations, present a true multidimensional and panoramic view of China, and advance the progress of human civilization.

It included a general meeting, themed forums, dialogues and side events. 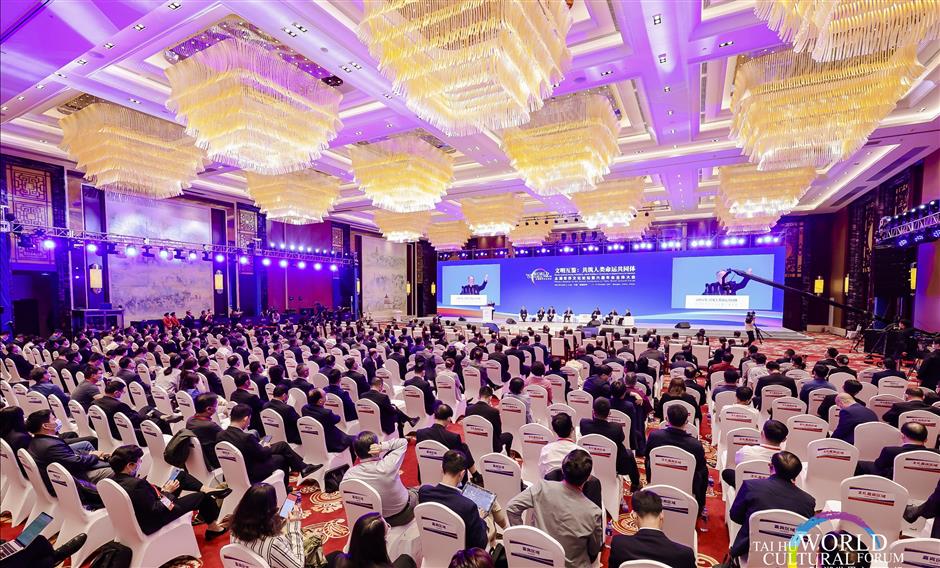 Scene at the conference

"Innovation of cultural legacies will empower social development," said Liu Yuzhu, board chairman of the China Foundation For Cultural Heritage Conservation and former head of the National Cultural Heritage Administration in one of the forums "Belt and Road: History and Future of the Pathway of Civilization."

Bengbu has unique cultural traditions, such as flower drum lanterns and Sizhou opera, and efforts will be ramped up in international exchange and cooperation to promote the cultural value and essence of these legacies, said Liu.

There are more than 70 million people working in China's tourism industry, while professionals who can meet the demand for high-quality development of the nation's tourism industry are in urgent need. Also, the education and training of tourism staff needs to be significantly improved, said Wang Zhifa, former deputy director of the Ministry of Culture and Tourism of China, in a dialogue.

"Culture is the core of tourism, and architecture and areas ideal for walking are important tourist resources in Shanghai which reflect the city's culture," said Zhou.

Shanghai's first shuttle bus taking people to experience the glamor of the city's classic architecture began service in September. The route, popular among residents and tourists, carried over 11,000 passengers during the last Shanghai Tourism Festival.