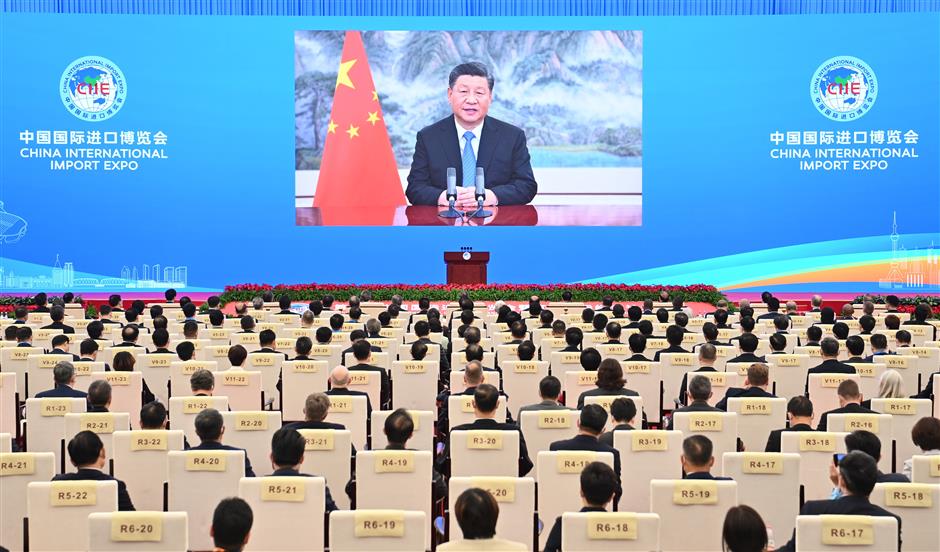 President Xi Jinping addresses the opening ceremony of the fourth China International Import Expo in Shanghai via a video link on Thursday.

Xi made the remarks while addressing the opening ceremony of the fourth China International Import Expo via video.

Pledging further efforts to shorten the negative list for foreign investment, Xi said that China will expand the opening up of the service sectors, such as telecommunications and medical care, in an orderly manner.

The country will release a negative list on cross-border trade in services in pilot free trade zones.

He also noted that China will be deeply engaged in international cooperation in areas including green and low-carbon development and digital economy, and actively promote the country's accession to the Comprehensive and Progressive Agreement for Trans-Pacific Partnership and the Digital Economy Partnership Agreement.

Xi also expressed concerns over the decline of an index on world openness and the weakening global consensus on opening-up in the past decade.

He said economic globalization is faced with headwinds amid global changes and a pandemic both unseen in a century, as well as rising unilateralism and protectionism.

The president called for grasping the prevailing development trend of economic globalization, supporting all countries in further opening up, opposing unilateralism and protectionism and pushing for a brighter future for humankind.

China will steadfastly uphold true multilateralism, Xi said. The multilateral trading system with the World Trade Organization at its core is the cornerstone of international trade, he said.

China supports the reform of the WTO in the right direction, the inclusive development of the multilateral trading system, and the legitimate rights and interests of the developing members, Xi said, adding China has fully fulfilled the commitments it made when entering the World Trade Organization in 2001.

Since 2001, more than 2,300 laws and regulations have been abolished by the central government, and over 190,000 by local governments, Xi said, adding that the move has injected vitality into the Chinese market and society.

China's overall tariff level has dropped to 7.4 percent from 15.3 percent in 2001, lower than the 9.8 percent the country promised when entering the WTO.

Over the past two decades, the global ranking of China's economic aggregate has risen to second from sixth place. Its ranking of trade in goods has risen from sixth to first, while that of its trade in services has jumped from the 11th to the second.

China leads developing countries in terms of the actual use of foreign investment while its ranking of direct outbound investment has jumped to the top of the world list from 26th place, he said.

China will develop "Silk Road e-commerce" as part of the country's efforts to share market opportunities with the rest of the world.

The country will promote the integration of domestic and foreign trade, and accelerate the building of designated cities into international consumption centers, Xi said.