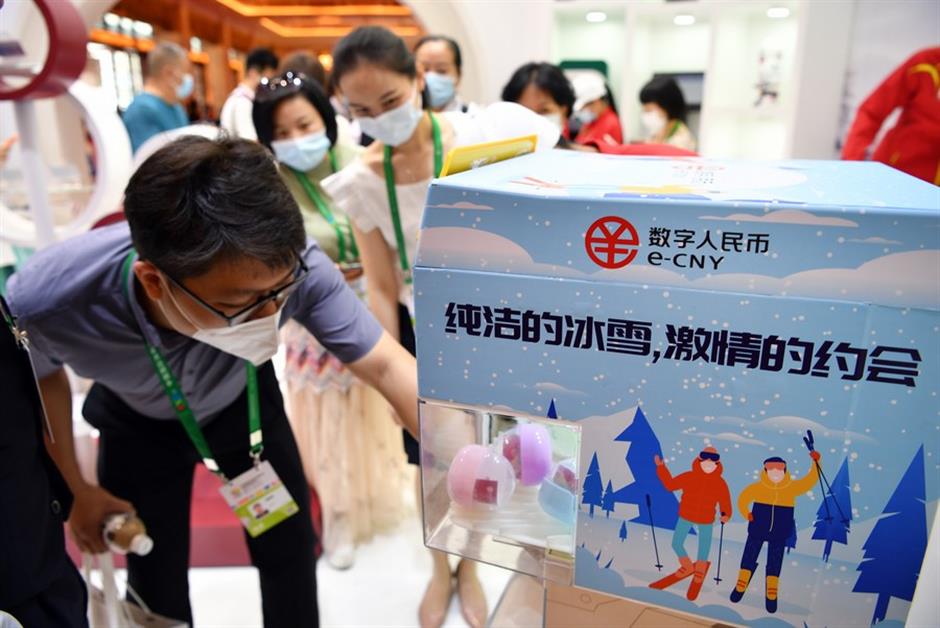 A visitor tries out a gaming machine that accepts payment with digital Chinese yuan (e-CNY) at the first China International Consumer Products Expo in Haikou, capital of south China's Hainan Province, on May 8, 2021.

China's digital fiat currency, or the e-CNY, has evolved into an ever-expanding presence in Chinese people's lives and has shown more charm thanks to growing application scenarios.

Since its debut in late 2019, the digital yuan has been accessible in 10 Chinese cities, including Beijing, Shanghai and Shenzhen, with its applications ranging from bill settlements in restaurants to transactions on the futures market.

As of October 22, over 140 million personal wallets had been opened, with the transaction volume totaling near 62 billion yuan (about US$9.72 billion), according to the People's Bank of China, the country's central bank.

China's efforts in developing its central bank digital currency started in 2014 when it first set about relevant studies, followed by central bank moves to engage in research and development cooperation with commercial banks and Internet companies in 2017.

The pilot programs have been running smoothly, but the construction of relevant systems is still in progress, according to Mu Changchun, head of the central bank's digital currency research institute.

More efforts should be made in areas such as intelligent and customized settings of e-CNY wallets, system security and stability as well as related laws and supervision measures, Mu said.

New types of services involving the digital yuan are emerging along with the trials to provide more favorable conditions.

Ready for the Olympics

Of all the application scenarios, the upcoming 2022 Beijing Winter Olympics could be one of the most eye-catching.

All construction of digital yuan payment scenarios was completed in the offices of the Beijing Organizing Committee for the 2022 Olympic and Paralympic Winter Games, said the central bank.

Consumers can use the e-CNY either through wallet apps installed on their mobile phones or via physical wallets in the forms of cards and wearables such as smartwatches and ski gloves or badges to meet their diversified needs.

During the Beijing Winter Olympics, consumers can use digital yuan widely – not only at the venues but also for various services, including transportation, catering, accommodation, shopping, sightseeing, health care, telecommunications and entertainment.

Also, e-CNY users will be rewarded with a certain amount of digital yuan for booking flights or trains online and not using disposable tableware when ordering takeout on Meituan.

Since the platform started its first e-CNY carbon neutrality trial in September, over 2 million personal wallets were registered, according to Bao Ta, vice president of Meituan.

In total, more than 42 million green cycling kilometers have been generated, reducing 11,400 tons of carbon emissions compared to driving a fuel-powered vehicle, according to Bao.

"As we see, digital-yuan-related novel technologies could be an important catalyst for the creation of more application scenarios where the country's carbon neutrality ambition can materialize in everyday life."