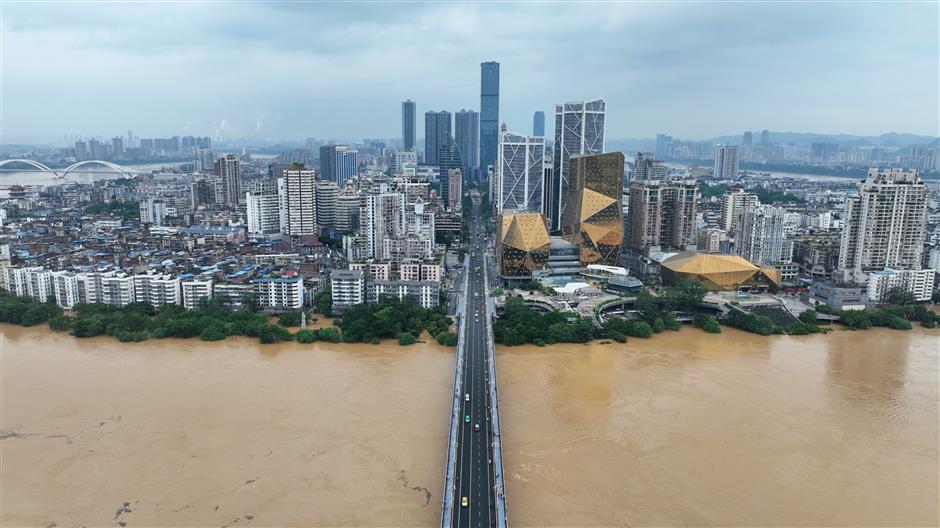 Persistent heavy rains have continued to batter parts of China, swelling rivers, triggering landslides and prompting the relocation of people in recent days.

The flood control and drought relief headquarters of east China's Jiangxi Province upgraded the flood control emergency response to level II on Monday evening, as around 485,000 residents were affected by lingering rain.

From Saturday to 3:00 pm Monday, heavy rain and floods had hit 55 counties across Jiangxi, with 43,300 hectares of crops affected. Direct economic losses from the floods reached 470 million yuan (about 70.3 million US dollars), according to the headquarters.

The water level at the lake's key Xingzi hydrological station was recorded 0.05 meters higher than the alert level of 19 meters at around 3 pm It is expected to continue rising in the coming days.

Persistent rain has also battered the neighboring Hunan Province since Friday. As of 8 am Tuesday, 250,473 people had been affected by rainstorms in Hunan, according to the provincial flood control and drought relief headquarters.

Heavy precipitation has resulted in the collapse of 94 houses, forcing 51,143 local residents to relocate, and damaged more than 21,607 hectares of crops in the province.

In south China's Guangdong Province, downpours have triggered floods and landslides. Around 479,600 people in cities including Shaoguan, Heyuan and Meizhou had been affected by the rainfall, according to the provincial emergency management department.

The direct economic loss so far is estimated at over 1.7 billion yuan.

Guangdong's Shaoguan City, where average rainfall since late May has topped all previous records during the same period, raised the flood alert to Level I, the highest, on Tuesday morning. Residents living on the river banks were asked to relocate to higher ground.

Recent heavy rainfall in the country's southern regions will abate from Wednesday, with the main rain belt moving north and downpours expected to hit parts of Inner Mongolia, Jilin and Liaoning in north China, the National Meteorological Center said.

Experts have, however, cautioned against hazardous impacts of floods in small and medium-sized rivers, urban and rural waterlogging, and landslides in mountain areas, advising the public to stay away from meteorological disaster-prone regions.