China's pet-sitters back in business after COVID reopening 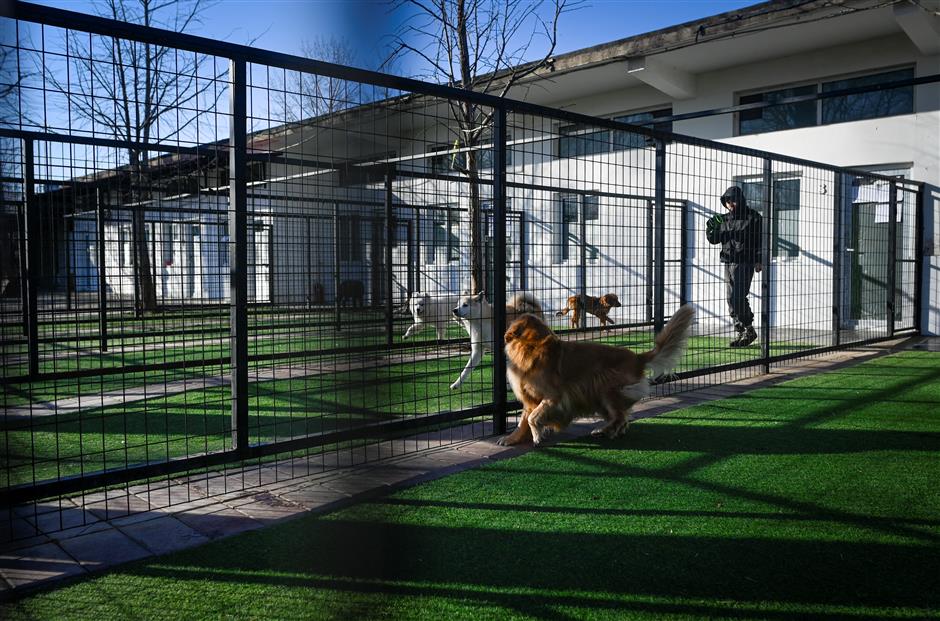 Dogs run in a kennel at a dog hotel during the upcoming lunar new year in Beijing on January 20.

At Zhou Tianxiao's hotel in Beijing's northern suburbs, where room service includes belly rubs and squeaky toys, reservations are filling up fast as the loosening of COVID restrictions in China fuels a travel boom.

Zhou's dog mansion is just one of many pet sitting services that have seen a welcome return to former levels of bookings since a semblance of normal life resumed.

Zhou, who is also an Internet influencer, originally built the half-million-dollar facility for the comfort of just one dog – his own border collie Sylar – before turning it into a business.

Painted in colorful murals with a massive yard and individual video-linked pens, it's a popular choice for Beijingers who want to leave their pampered pooches in safe hands over the Lunar New Year holiday.

"During the Spring Festival, people normally need to visit their relatives and friends and usually they can't bring their dogs with them during those visits," Zhou explained.

"And we have a swimming pool. For dogs being sent here it's like having their own holiday," he chuckled.

Millions of Chinese are reuniting with family for the first time since the pandemic broke out in late 2019.

Included among them are thousands of clients from the pet-sitting platform Maoxiang, which means "Cat Alley" in English.

"We have more orders for this Spring Festival than for the entire year last year," founder Yan Dong said.

"When the pandemic situation was severe, people just didn't leave their homes. We were badly affected because there wasn't much demand," she said.

Seven Sha, a 30-year-old cat sitter based in Beijing, said she expects to make about 80 home visits during the holiday's main seven days.

"My workload during the Spring Festival is saturated every day... I have to work from early in the morning to late at night," she said.

Pet ownership in China has soared as the country's middle class expands rapidly. In 2022, there were nearly 100 million pet-owning households.

Many are devoted owners prepared to fork over huge sums to ensure their pets' comfort.

Media in Shanghai reported that a single night in some pet sitting establishments was priced at 1,000 yuan (US$147), well over the average price of a hotel room for a person.

Sha said someone once sent her a 1,000-word document on how to look after their cat.

"Most of the clients see their cats as their family members, and they don't care how much they spend on them," she said.

Some even prefer their furry family members over their human ones.

"Personally, I'd rather spend time with the dogs here than go back home," said Mei, a worker at Zhou's dog hotel.

"Like most families, when we first meet for the holidays it's very happy – but as time goes on, there may be some arguments."