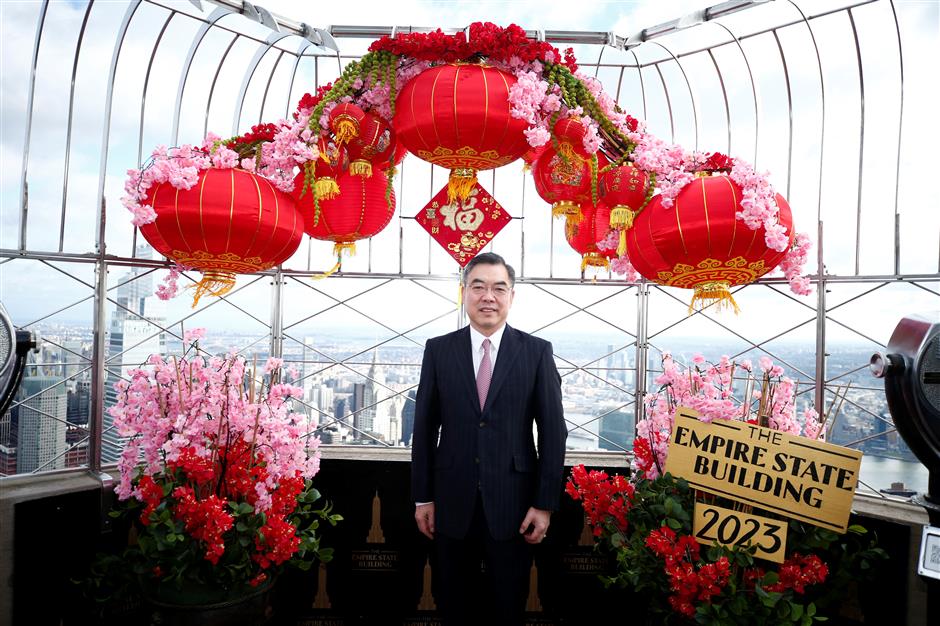 Chinese Consul General Huang Ping attends as the Empire State Building is lit in red in celebration of the Lunar New Year on January 20, 2023, in New York City.

Well-known landmarks in New York City have been lit in red in celebration of the Chinese Lunar New Year which falls on January 22 this year.

"We are so pleased to extend our heartfelt New Year's wishes to the entire Chinese community here in the United States, around the world and especially in China," said Tony Malkin, chairman, president and CEO of Empire State Realty Trust, at the ceremony.

"This is an extra special Lunar New Year lighting ceremony as it is the first one we have been able to hold in person, live in three years," added Malkin.

"Spring Festival is a moment we transfer from one zodiac to another. We're still in the Year of the Tiger. This year is very important ... because this year marks the 50th anniversary of the China-US re-engagement," said Huang Ping, Chinese Consul General in New York.

Speaking at the lighting ceremony, Huang said the re-engagement 50 years ago led to the normalization of China-US relationship which delivered greatly.

Huang noted that people-to-people exchanges between China and the United States was boosted in the past 50 years and more than 5 million people flew across the Pacific each year before the pandemic.

Huang stressed the importance of enhancing the people-to-people exchanges which was interrupted by the deterioration of the bilateral relationship and the pandemic.

The Chinese Consulate General in New York will be opened in full size on January 25 so people can easily come to apply for the visa to go to China, said Huang.

"I hope to see more people coming to get our service and go to China. In the meantime, I want to bring more people to come back," added Huang.

According to Chinese zodiac and tradition, 2023 is the Year of the Rabbit, which symbolizes longevity, positivity, auspiciousness, wittiness, cautiousness, cleverness, and self-protection.

The Spring Festival Window Exhibition in the lobby of the Empire State Building on the Fifth Avenue features installation of artistic imagery and representations of the coming year's animal - the rabbit.

The Empire State Building is lit in red starting Friday evening around sunset, marking the 23rd consecutive year of such a tradition.

Visitors to the deck observatory on the 86th floor of the Empire State Building also have the chance to enjoy a taste of the Year of the Rabbit.

"Sheng Mary Bakery will reside on our 86th floor observatory from today through January 29 to offer traditional treats to our guests," said Malkin.

The bakery offers specialty cakes for the Year of the Rabbit and other Chinese specialty foodstuffs.

Tourists can also get panda toys, red envelopes, candies, fabrics and fans in Chinese style from another stand on the 86th floor of the Empire State Building.

This is the first time that the Empire State Building has a Chinese stand in celebration of the Chinese Lunar New Year, according to Peter Zhang, president of the Sino-American Friendship Association, which facilitates bilateral exchanges between the United States and China.

Meanwhile, the One World Trade Center is scheduled to be lit in red in later afternoons and early evenings from Friday to Sunday in celebration of the Chinese Lunar New Year.