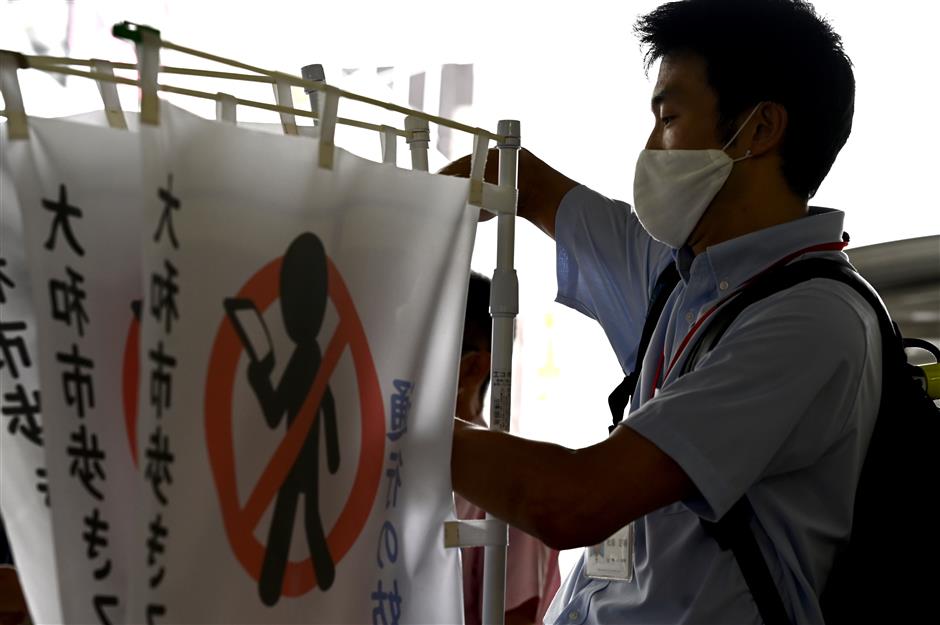 A man hired by the local city hall holds banners to inform people about a ban on using mobile phones while walking, at a train station in Yamato, Kanagawa prefecture on Wednesday.

A Japanese city on Wednesday imposed Japan’s first ban on a habit seen around the world — pedestrians glued to their phone screens while walking, sometimes dangerously oblivious to their surroundings.

Visitors arriving at the railway station in Yamato City were greeted with banners announcing the new ban, which applies to all foot journeys around the neighborhood’s public roads, squares and parks.

“Using smartphones while walking is banned. Please operate your smartphones after you stop walking,” a recorded female voice cautioned travelers.

There is no punishment for those unable to tear themselves away from their screens in the street but the suburb of 240,000 wants to use the ordinance to highlight the dangers of scrolling while strolling. The unusual move appeared to have broad support from citizens both young and old, with very few people on the streets of Yamato spotted breaching the new rule.

“I often see people using mobiles while walking. They are not paying attention to things around them. Elderly people may not be able to dodge them,” said 64-year-old Kenzo Mori.

“Using a mobile phone is addictive ... People seem to feel they cannot stop looking at their mobile and they have to feel connected with friends all the time,” he said.

﻿
Special Reports
﻿
Japanese city bans phone use while walking
Israeli foreign minister's remarks cast doubt over annexation plan
Germany takes EU presidency at a crucial juncture
Austria issues highest travel warning for Western Balkans
Japan's new Shinkansen bullet train makes debut
US fatalities on rise with more than 1,000 deaths in 24 hours
Broadway lights off until 2021 due to the pandemic
Fussy food shoppers in Japan change to online grocery stores
Europe reopens its borders to 14 countries, but the US is not one
Boris Johnson vows to boost UK's economy by infrastructure
EXPLORE SHINE