The surge in novel coronavirus cases sapped the fun out of the July 4 celebrations in the United States on Saturday as Britons flocked to the pub to toast an easing of their restrictions.

In Spain, authorities placed 200,000 people back in lockdown in the Catalonia region after a spike in infections which underlined how easily hard-fought progress can be reversed.

And in Brazil, the world's second most badly-affected country, bars and restaurants were authorized to reopen in Rio de Janeiro at 50 percent capacity in a bid to draw in tourists to Copacabana beach.

With nearly 130,000 dead and the daily infection rate hitting a new high of 57,683, the United States is by far the worst-hit country — a title that cast a heavy shadow over the weekend's Independence Day festivities.

Beaches that would normally be packed on July 4 are shut on both coasts as California and Florida suffer alarming surges in cases while bars in states such as Texas and Michigan have had to close on what should be one of their busiest weekends of the year. 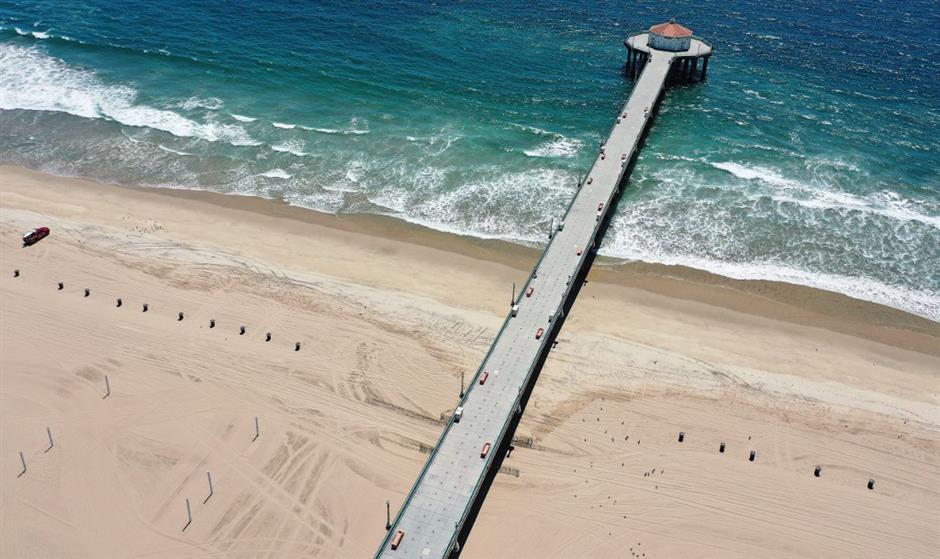 An aerial view of the closed and deserted pier and beach on Independence Day afternoon amid the COVID-19 pandemic on July 4 in Manhattan Beach, California. Los Angeles County beaches and piers including Manhattan Beach are closed through the July 4 holiday weekend amid reinstated restrictions intended to slow the spread of the coronavirus.

While New York's public beaches reopened earlier in the week, locals in the city that had been the global epicenter of the crisis remained extremely wary of a resurgence.

Mark Ruiz, who came to New York's Coney Island beach with his wife and two children for a picnic, said he was "definitely worried" about the virus and his family would scrupulously respect social distancing rules.

"I'll have my mask on as soon as we leave the beach, so we came prepared," said Ruiz who works as an ice cream distributor to restaurants around the city.

"I just can't stay at home on the Fourth of July, I gotta take my kids out. We can't be in a bubble all summer."

Across the United States, Independence Day celebrations had an eerie feel — Main Street parades have been cancelled, boisterous backyard barbecues scaled down and family reunions put off.

Thousands of people are expected to attend celebrations in downtown Washington on Saturday evening where President Donald Trump will oversee an event called "Salute to America" along with a military flyover and a fireworks display.

Guests including doctors, nurses and members of the military and their families have been invited to the White House to watch proceedings.

"To ensure the health and safety of those attending, social distancing will be observed and facial coverings and personal hand sanitizer will be provided," according to White House spokesman Judd Deere.

But numbers were expected to be well down on previous years and there will be no concert to keep the crowds on the National Mall until late at night as is usually the case.

Ahead of the nighttime celebrations, a series of anti-racism marches also took place on the National Mall with Trump's handling of the coronavirus crisis adding to the anger of protestors.

Trump barely mentioned the virus in a speech on Friday night in Mount Rushmore where he enjoyed a fireworks celebration with thousands of attendees in close quarters, most without masks.

In a tweet on Saturday, Trump again attributed the rise in daily infections to an increase in testing levels, even though hospitalizations are also increasing.

"Cases, Cases, Cases! If we didn't test so much and so successfully, we would have very few cases," said Trump. 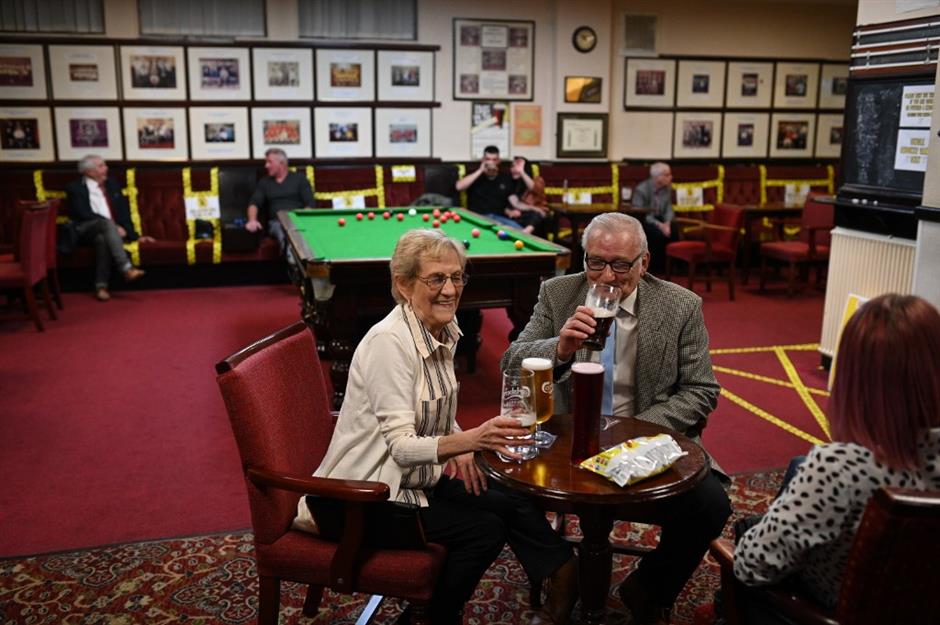 People enjoy a drink with yellow tape on the seats and floor aiding social distancing inside the Burnley Miners Working Men's Social Club in Burnley, northwest England, on July 4, as restrictions are further eased during the COVID-19 pandemic. Pubs in England reopen on Saturday for the first time since late March, bringing cheer to drinkers and the industry but fears of public disorder and fresh coronavirus cases.

But while the virus was dampening the mood in the United States, the people of Britain were trooping back to their local pubs for the first time since late March.

"It feels amazing," said Leo Richard Bill, a soldier, after getting through the door of one of London's buzziest restaurants on the Thames River's popular south bank.

"It's been what, like three months since... me and everyone else haven't been able to get outside and have a good time. So yeah, it feels good to get amongst it," he said.

Britain's Prince William got into the spirit of things by having his picture taken sipping a glass of cider and dutifully using hand sanitizer from a wall-mounted dispenser.

And finance minister Rishi Sunak urged Britons to "eat out to help out" — a message that did not appear to sit well with Health Secretary Matt Hancock.

"I'm no killjoy," said Hancock. "But the virus can still kill."

Nations are now rethinking how their cities can function and economies survive in the face of an illness that has infected at least 11 million and killed 526,000 globally.

And governments across the world are trying to carefully calibrate their reopenings — rousing their economies without triggering outbreaks and more lockdowns.

The lockdown announcement in Spain's northeastern Catalonia region came after regional officials noted a "sharp rise" in infections around the town of Lerida some 150 kilometers west of Barcelona.

Europeans have already begun converging on their favorite holiday spots thanks to an easing of border restrictions put in place to stop the spread.

Meanwhile, thousands of residents in high-rise apartments in Melbourne went into lockdown for at least five days as Australia recorded its biggest daily increase of infections in months.

"There are many, many vulnerable people who live in these towers," Victorian Premier Daniel Andrews said.

Cases have been skyrocketing across Latin America as well.

Brazil now has 1.5 million confirmed infections and 63,000 deaths while the caseloads in Peru and Chile have also exceeded those in any part of Europe except for Russia.

Cases also surpassed 200,000 in Saudi Arabia as the virus continued to spread through the Middle East.