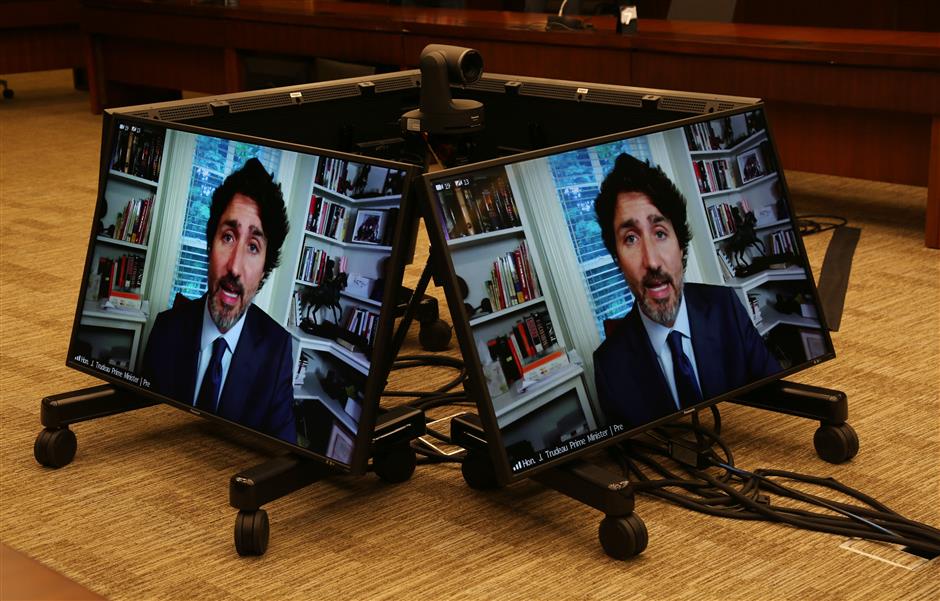 Canada's Prime Minister Justin Trudeau testifies via video conference during a House of Commons Standing Committee on Finance on July 30 in Ottawa, Canada.

In highly anticipated testimony to Parliament on Thursday Canadian Prime Minister Justin Trudeau denied any conflict of interest in awarding a lucrative government contract to an organization that had previously paid members of his family.

Trudeau spoke in his own defense before the Finance Commission for 90 minutes, an exceptional move for a Canadian head of government, as he tries to ward off an escalating scandal.

"There was never any direction by or attempt to influence from me or my staff that the public service recommend WE Charity," he said referring to the group central to the probe.

WE Charity has said it paid Trudeau's mother and brother nearly C$300,000 (US$223,561) for speaking engagements in recent years.

Trudeau's wife was paid C$1,500 for an event in 2012, before her husband became the leader of the Liberal Party.

Trudeau apologized for the affair on July 13, saying he made a "mistake" in not recusing himself from discussions about awarding a student scholarship fund government contract to WE Charity that was initially estimated at C$990 million.

The charity has given up the program, but the controversy remains. The organization could have already received more than C$40 million, according to reports.

The opposition Conservative Party has also accused WE Charity of reimbursing Trudeau relatives another C$212,000 in travel expenses.

The prime minister acknowledges he was aware of his relatives' activities with the charity, but that he was not abreast of any remuneration, including travel expenses.

"Nobody believes you when you say you don't know how much money your family has got from the group," Conservative spokesman Pierre Poilievre said.

"How much money total have your brother, mother and spouse received from this organization, how much?"

Both main opposition parties have called on Trudeau, who heads a minority government, to resign.

The Conservatives are basing their numbers on testimony given by WE Charity's co-founders Craig and Marc Kielburger to the Finance Commission on Tuesday.

"We were not chosen for this work by public servants because of our relationship with politicians," the brothers insisted during their four-hour appearance.

Finance Minister Bill Morneau, who has also found himself ensnared in the matter as a second subject of the ethics investigation, said last week that he had paid back more than C$41,000 in travel expenses to the charity.

Morneau also apologized for his involvement in discussions about disbursing contracts to WE Charity, as one of his children is employed by the organization.