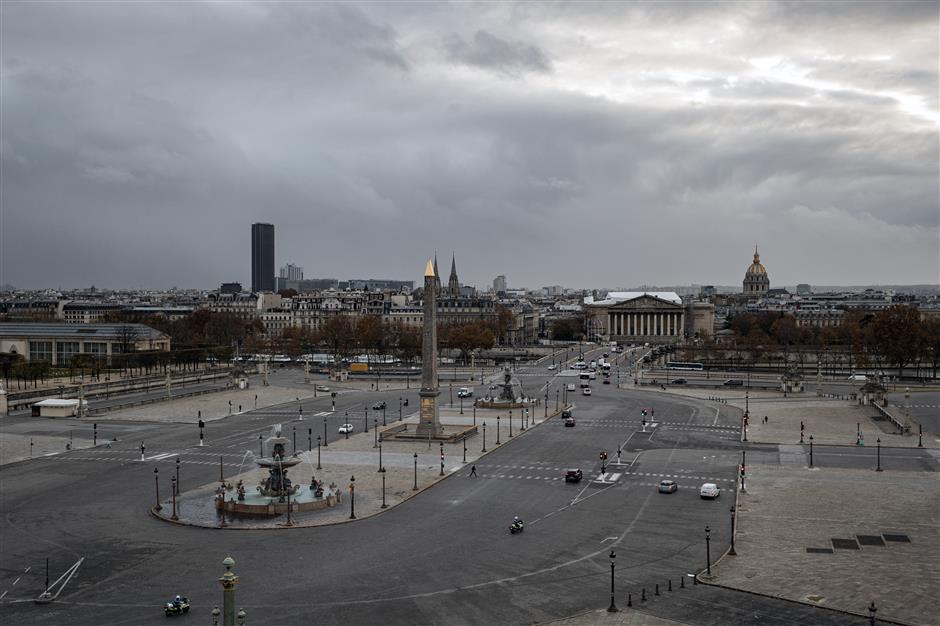 A photograph taken on November 16, 2020, shows the Place de la Concorde with the Palais Bourbon, the venue of the French National Assembly in Paris, as France is on a second lockdown aimed at containing the spread of the COVID-19 pandemic caused by the novel coronavirus.

After a record of some 69,500 new cases were registered on November 2, "the incidence rate has been declining. But the number of cases, which is still very high, must return to a reasonable level which the President of the Republic (Emmanuel Macron) has set at 5,000," Salomon told reporters at a weekly briefing on the epidemic situation.

"Our collective efforts are beginning to bear fruit and justify this positive trend. It is by maintaining a high level of vigilance and mobilization that we will be able to spend year-end holidays in the best conditions of safety," Salomon said.

"The epidemic is slowing down but the pressure in hospitals remains very high... Let's redouble the effort to regain control of the epidemic," he added.

On October 30, France entered a second countrywide lockdown, initially for one month, to contain a grave virus resurgence.

Asked about a date on when the lockdown might be eased, Salomon said "we must be very vigilant."

Early in the day, Prime Minister Jean Castex told the National Assembly that some restrictive measures to brake the virus spread "will continue" after the lockdown because the epidemic should be "managed in long term."

"The better the current phase of confinement produces its effects, the faster we can move on to a next phase, which will nevertheless not be a return to that before the confinement," he told the lower house of the parliament.

"That is to say that there will be braking provisions that will last," he said.

"We will make the announcements as soon as we have made the decisions," said the prime minister, stressing that for the de-confinement to be possible, "it is necessary that the incidence rates continue downwards, and the intensive care services are less saturated."

President Emmanuel Macron will address the nation next week to evaluate the confinement impact and unveil terms of a gradual return to normalcy, reported local media quoting Elysee sources.