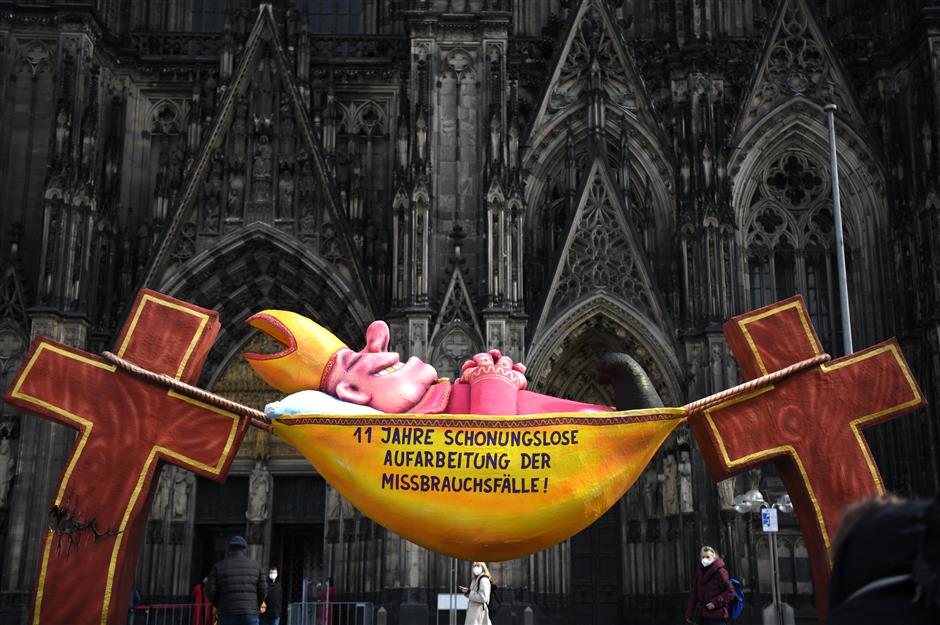 A sculpture by artist Jacques Tilly with the slogan “11 years of relentless investigation of the abuse cases!” is seen in front of the Cologne Cathedral in Cologne, western Germany on Thursday.

An independent study commissioned by the Roman Catholic Church uncovered hundreds of cases of sexual violence allegedly committed by clergy and laymen in Germany’s top diocese, its authors said on Thursday.

The long-awaited 800-page report on the Cologne diocese found 202 alleged perpetrators of sexual assault and 314 victims between 1975 and 2018, said the attorney mandated by the Church Bjoern Gercke.

“More than half of the victims were children under the age of 14,” Gercke said.

However, the investigation cleared Cologne’s Archbishop Rainer Maria Woelki, a conservative who has long resisted Church reform efforts, of “breach of duty” regarding abuse within the Church.

Woelki had faced a months-long firestorm of protest for refusing to allow the publication of an earlier study on abuse committed by priests in his diocese.

He had justified his decision by citing a right to privacy of the alleged perpetrators accused in the report, carried out by a Munich law firm, and what he called a lack of independence on the part of some researchers.

His approach was branded “a disaster” as recently as late February by Georg Baetzing, president of the German bishops’ conference, in a blistering public statement.

Woelki said in early March he would immediately “temporarily suspend, if necessary, people cited in the report” before taking more concrete measures to address its findings.

And he expressed willingness to throw his weight behind an honest accounting of crimes within the Church.