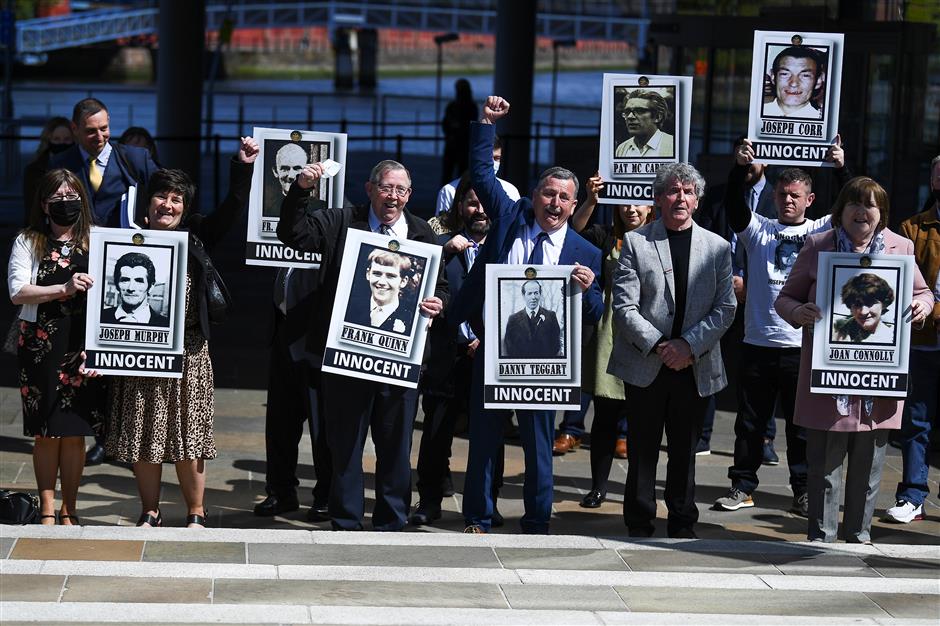 Family members of the victims gesture as they pose for a picture following a news conference after listening to the findings of the report on the fatal shootings of 10 people in the Ballymurphy area of Belfast in 1971 that involved the British Army, in Ballymurphy, Belfast, Northern Ireland, on Tuesday.

A UK government minister stood before lawmakers on Thursday and formally apologized for the killing of 10 civilians during unrest in Belfast half a century ago, as Britain and Northern Ireland struggle to come to terms with the events of the past.

Northern Ireland Secretary Brandon Lewis told the House of Commons that the government “profoundly regrets and is truly sorry” for the events in the Ballymurphy area of west Belfast in 1971. A coroner’s court ruled on Tuesday that the nine men and one woman killed by British troops were innocent victims who weren’t threatening soldiers at the time they were shot.

“They should have not had to wait nearly five decades for the judgment this week, nor have been compelled to relive that terrible time in August 1971 again and again in their long, distressing quest for truth.”

Prime Minister Boris Johnson apologized on Wednesday in a telephone call with the leaders of Northern Ireland’s power-sharing government, which includes representatives of both sides of the region’s sectarian divide.

The coroner’s verdict comes as veterans’ groups pressure the British government to block the prosecution of former soldiers, many now in their 70s and 80s, for their actions during the violence in Northern Ireland known as The Troubles. In recent weeks the six-county region that is part of the UK has been rocked by violent protests fueled by anger over the perceived unfair enforcement of coronavirus restrictions and concerns about Britain’s departure from the European Union.

More than 3,000 people died during three decades of conflict between mostly Catholic supporters of unification with the Republic of Ireland and mostly Protestant backers of continued links with the United Kingdom.

The killings in Ballymurphy occurred over three days in August 1971 as the British Army sought to implement a new government policy that allowed for the arrest and internment without trial of suspected militants. Violence flared when protesters confronted soldiers who had moved into the largely Catholic area to arrest suspected members of the Irish Republican Army.

High Court Justice Siobhan Keegan ruled on Tuesday that all the victims were “entirely innocent” and weren’t engaged in paramilitary activity at the time they were shot. The dead included a mother of eight and a Catholic priest who was waving a white handkerchief as a sign of peace while assisting a wounded man.

Their families had fought for decades for a new inquiry to clear the names of their loved ones after earlier inquests proved inconclusive, fueling suggestions that the victims were somehow responsible for the shootings.

The families said the apology from Lewis, though more formal than Johnson’s, still was not enough. John Teggart, whose father was killed at Ballymurphy, said the government’s apology should come from Johnson.