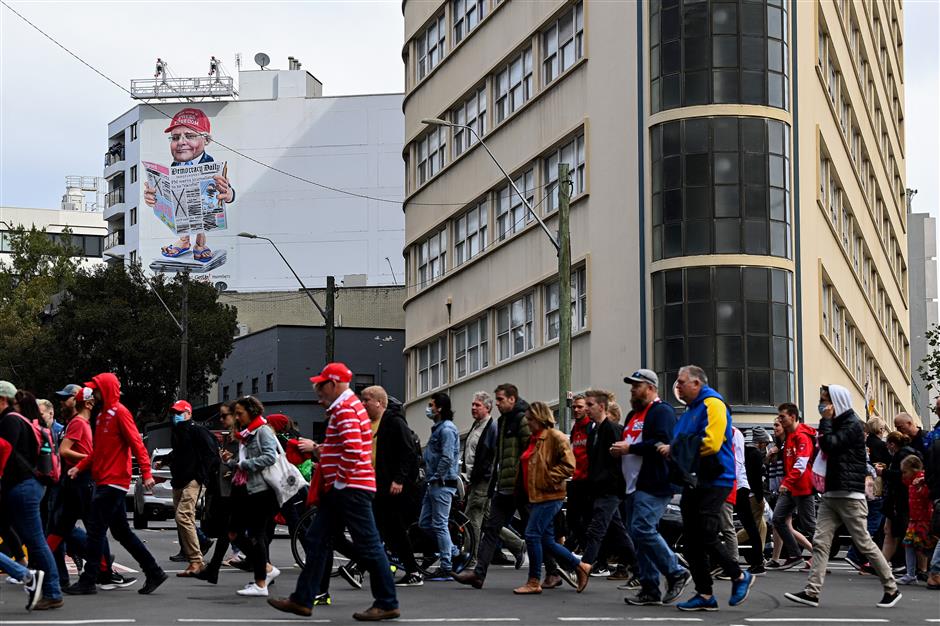 People cross a street in front of a mural of Australian Prime Minister Scott Morrison on a building in Sydney on Saturday.

Australia is sticking to plans to start reopening to the rest of the world only from the middle of next year, officials said on Sunday, resisting pressure to end the closure of international borders.

In March 2020, Australia closed its borders to non-nationals and non-residents and has since been allowing only limited international arrivals, mainly citizens returning from abroad.

Earlier, Treasurer Josh Frydenberg told the Australian Broadcasting that the medical advice to keep the borders closed had “served us very well through this crisis.”

Australia’s border closure, combined with snap lockdowns, swift contact tracing and public health compliance has ranked its control measures among the world’s most effective. Infections total about 29,700, with 910 deaths.

But border reopening plans unveiled this week have sparked criticism from businesses and industries, as well as politicians in Morrison’s Liberal Party.

“Like many measures, international border closures had a temporary place, but it is not sustainable and will turn us into a hermit outpost,” the Sunday Age newspaper quoted Tim Wilson, a Liberal Party member of parliament, as saying.

The newspaper also published recordings from Victoria’s Chief Health Officer Brett Sutton, one of the architects of Melbourne’s 111-day tough and successful lockdown last year. He suggested Australia must start thinking about a reopening strategy once there is high vaccination coverage.

The government budget unveiled this week envisages vaccination by year-end for all willing Australians.

The border closure has stranded many Australians abroad. Figures show that about 9,000 Australians in India have registered requests to return home.

On Saturday, the first repatriation flight from New Delhi following Australia’s controversial ban on travel from India arrived half-empty in the northern city of Darwin, as many who had planned to travel were denied boarding after testing positive for the virus.

Morrison defended the testing requirements: “I have seen the suggestions from others who seem to think that we can put people who have tested COVID-positive on planes and bring them into Australia. That just doesn’t make any sense.”