Muslims around the world began marking a somber Eid al-Fitr on Thursday amid rising hostilities between Israel and Palestinians, in the second celebration in the shadow of the coronavirus pandemic.

The three-day festival, which marks the end of the holy fasting month of Ramadan, is traditionally celebrated with mosque prayers, family feasts and shopping for new clothes, gifts and sweets.

But casting a pall on the festival, already subdued due to the raging pandemic, was deadly violence between Israel and Palestinians, with fears growing that it could spiral into full-blown conflict.

Tensions have soared over Israel’s planned eviction of Palestinians from a district in annexed east Jerusalem, which the Jewish state sees as part of its eternal capital but is considered occupied by the United Nations. Israel on Thursday scrambled to quell riots between Arabs and Jews on its own streets after days of exchanging deadly fire with Palestinian militants in Gaza.

In Gaza, 83 people have been killed so far, including 17 children, and more than 480 wounded in days of relentless Israeli air strikes on the crowded coastal enclave. 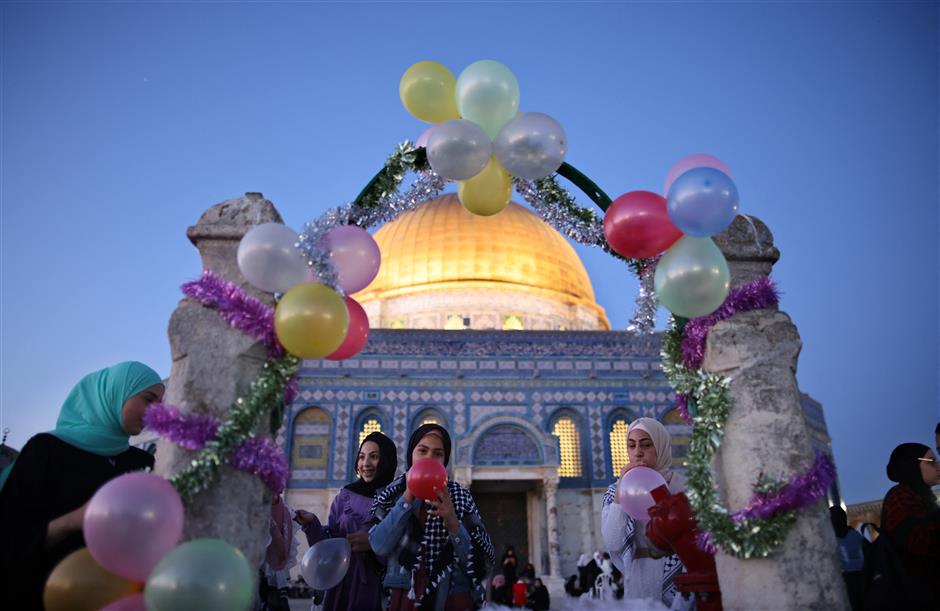 Muslim women blow up balloons for the Eid al-Fitr holiday, which marks the end of the holy fasting month of Ramadan, after the morning prayer at the al-Aqsa mosque compound, with the Dome of the Rock in the background, in Old Jerusalem on Thursday.

Echoing the mood in much of the Muslim world, Saudi Arabia’s King Salman voiced scathing criticism of Israel in a phone call on Wednesday with Pakistani Prime Minister Imran Khan on the occasion of Eid.

The king “stressed Saudi Arabia’s strong condemnation of the Israeli measures in Jerusalem and the acts of violence carried out by Israel... (and) affirmed that the kingdom stands by the Palestinian people,” the official Saudi Press Agency reported.

Mask-clad worshippers entered the Grand Mosque in the holy city of Mecca along socially distanced paths to pray before the Kaaba, a cube-shaped structure sacred to Muslims.

The scene was in contrast to Eid last year, when mosques in Saudi Arabia, home to Islam’s holiest sites, were largely devoid of worshippers and sermons were banned due to strict coronavirus curbs.

The Prophet’s Mosque in the holy city of Medina separately announced its “complete readiness” to receive worshippers for Eid prayers, state media reported.

In Afghanistan, a three-day Eid cease-fire agreed by the warring Taliban and government came into force, offering a glimmer of hope to war-weary Afghans after weeks of deadly violence. Fighting has intensified since the United States missed a May 1 deadline, agreed with the Taliban last year, to withdraw all of its troops.

“I feel so relaxed and peaceful today because it is Eid and there is no fighting,” said Mirajuddin, who was visiting Kabul zoo with his five children, all dressed in new clothes.

In Iran, supreme leader Ayatollah Ali Khamenei was set to pardon or commute the jail sentences of more than 2,000 convicted prisoners for Eid, according to his website.

Worshippers wearing masks joined communal prayers in the streets of Indonesia’s capital, Jakarta. The world’s most populous Muslim-majority nation allowed mosque prayers in low-risk areas, but mosques in areas where there was more risk of the virus spreading closed their doors.