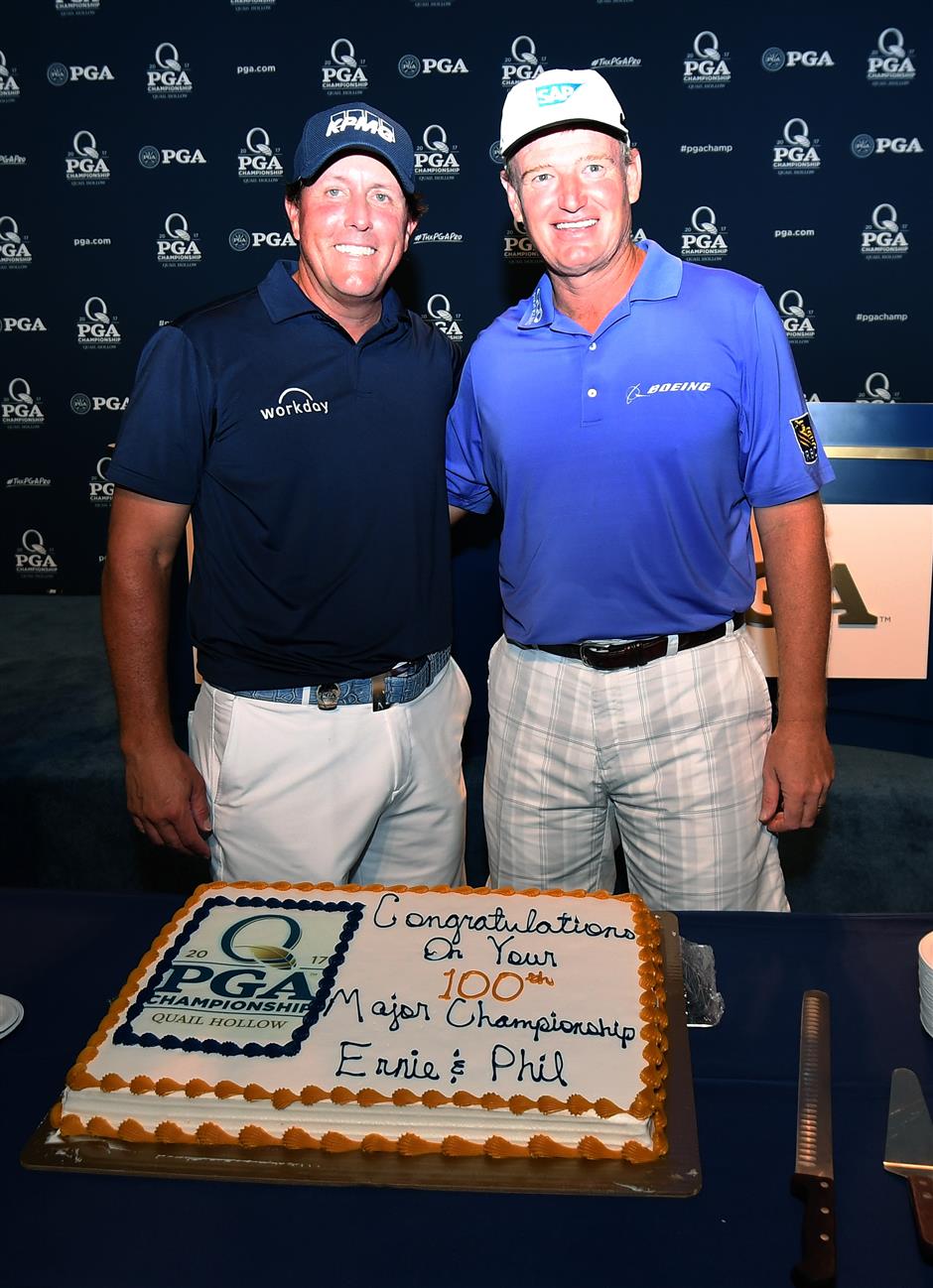 American Phil Mickelson and Ernie Els of South Africa celebrate their 100th major championship during a press conference prior to the 2017 PGA Championship at Quail Hollow Club in Charlotte, North Carolina, on August 8, 2017.

On the monitor below them was a photo of the first time they met. The 14-year-old with an easy smile was holding the winner's trophy from the 1984 Junior World Championship. Next to him was the golden boy from San Diego, slightly taller at the time, holding his trophy as the runner-up.

The next time playing together, this week at the PGA Championship, marks a special occasion for both. Three decades later, Els and Mickelson join an elite club by competing in their 100th major championship.

Els won his first one in 1994 at the US Open at Oakmont. Two-time US Open champion Curtis Strange was quoted as calling Els the "next god". Only later did the media realize what Strange had said was that Els would be the "next guy". It just sounded the other way because of his thick Virginia accent.

Mickelson didn't win his first major until he was 34, at the Masters, and it came at the expense of Els. Mickelson holed an 18-foot birdie putt on the final hole. Els, on the putting green hopeful of a playoff, heard the ground-shaking roar, picked up his golf balls and walked off. He never won a green jacket.

The PGA of America brought them together on Tuesday afternoon for an interview and a celebration, complete with a cake.

They become the 13th and 14th players to reach 100 majors, a list that starts with Jack Nicklaus and his 164. He is followed by Gary Player, Tom Watson, Arnold Palmer, Raymond Floyd, Sam Snead, Ben Crenshaw, Gene Sarazen, Tom Kite, Mark O'Meara, Bernhard Langer and Nick Faldo, who played his 100th and final major at St Andrews in the British Open two years ago.

All of them are in the Hall of Fame, Els and Mickelson included.

The PGA of America had photos from the first major they played (Els at the 1989 British Open, Mickelson at the 1990 US Open); the victories in the majors (five for Mickelson, four for Els); and yes, that 1984 Junior World.

"Do you see how grumpy Phil looks there," Els said with a chuckle. "It was quite a while ago, I can tell you. We had a great time. It was my first time ever to the United States and what a place to go play golf at in San Diego. I guess that was the first time we met. I think we played 18 holes together there that time, and I would never have thought that we'd be playing basically for life."

Mickelson remembers it well, specifically a shot Els hit in the final round when he was 20 yards short of the green on a par 5.

"You hit this little skipping, spinning wedge shot that checked up about a foot from the hole, and that's when I knew you were going to be a good player because I had not seen anybody else at 14 hit that shot," he said. "It's amazing that we've played together and against each other for so many years. It doesn't seem that long ago from those days."

And then he looked at the photo and said, "But it sure looks like a long time ago."

Their daughters were born a month apart, and now Els and Mickelson are sending them off to college this year. Samantha Els was accepted at Stanford. Amanda Mickelson is headed to Brown.

They are linked mostly through competition, win or lose.

"Phil has had a great time, winning five. I've won four," Els said. "But we've been in the hunt many, many other times and it didn't quite come off. But it's a hell of a thrill. It's what we play for, what we practice for. And you want to pull off great shots on the bigger stage."

They also had to settle for being second fiddle in the generation that was Tiger Woods.

Els was runner-up seven times to Woods worldwide, including back-to-back majors in 2000. Mickelson lost out to Woods in the final group of the 2001 Masters, and he was runner-up to him at the US Open the following year.

How different could it have been with Woods? Both say they would not have been the players they became. Woods was as tough a rival as anyone would face, though Els and Mickelson say they relished the challenge.

Els already had a US Open when Woods turned pro. He expected to win more.

"And then when Tiger came in '97, and him winning the Masters in the way he did, that kind of threw me off a little bit," he said. "I thought I was really one of the top players, which I was, but that was a pretty special display of golf. Personally, I could have obviously won a couple more. But as Phil says, this guy was so special. He absolutely changed the game. He got us to really elevate our games, brought so much attention to the sport, and obviously a lot more dollars to play for. So we've got to thank him."