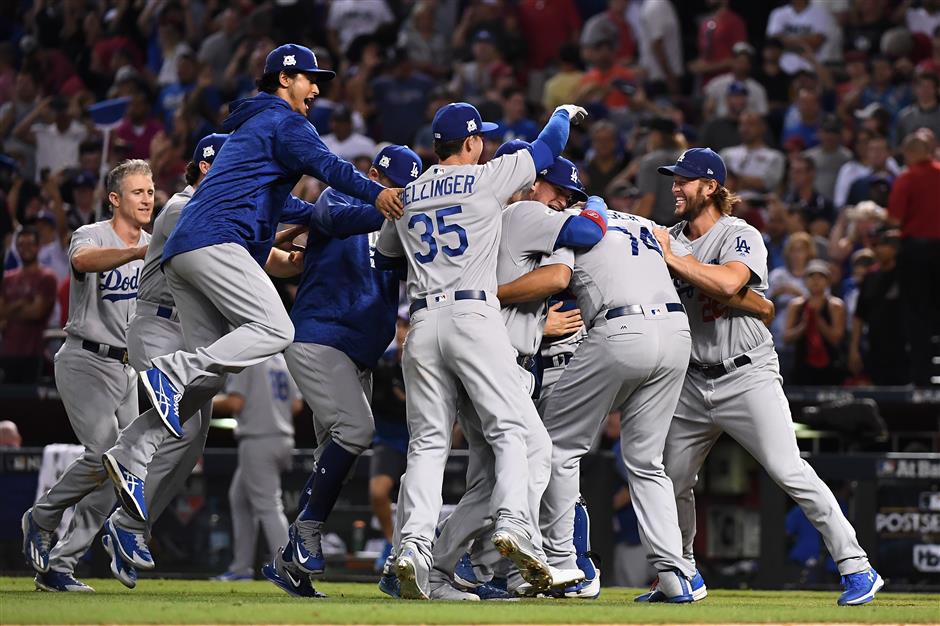 Clayton Kershaw (right) of the Los Angeles Dodgers celebrates with Cody Bellinger and Yu Darvish (left) after beating the Arizona Diamondbacks 3-1 at Chase Field in Phoenix, Arizona, on October 9, 2017, to win the National League division series 3-0.

Los Angeles and Houston punched their tickets to the next round of the Major League Baseball playoffs on Monday as the Dodgers swept the Diamondbacks and the Astros eliminated the Red Sox in four games.

The Astros rallied for a wild 5-4 victory over the Red Sox in Boston on Monday to win the best-of-five American League division series three games to one.

"We felt like that we could win this series, but we knew it was going to be tough," said Astros manager AJ Hinch. "We get out to a 2-0 (series) lead, and then you come to Fenway and it's just a different animal. But our guys just stayed the course."

Astros infielder Alex Bregman belted a game-tying home run off Red Sox ace hurler Chris Sale — pitching in relief — to lead off the eighth inning and Josh Reddick delivered a two-out run-batted-in single later in the inning off of Red Sox closing pitcher Craig Kimbrel that put the Astros up 4-3.

The Red Sox gave disheartened, rain-soaked fans at Fenway Park a last glimmer of hope in the bottom of the ninth when Rafael Devers led off the inning with a drive to deep left center field. It bounced off the wall and gave Devers an inside-the-park home run.

But it wasn't enough as the Astros reached a league championship series for the first time since 2005 — when they were in the National League.

George Springer and Jose Altuve drove in one run each for the Astros.

Andrew Benintendi hit a game-tying two-run homer in the fifth inning and Xander Bogaerts smacked his first career playoff homer, a solo blast in the first, for the Red Sox.

In Phoenix, rookie Cody Bellinger homered and drove in two runs, Yu Darvish pitched five strong innings, and the Dodgers swept their way into the NL championship series with a 3-1 victory over the Diamondbacks in Game 3 of their series.

Bellinger and Austin Barnes homered off Diamondbacks pitcher Zack Greinke while Japan's Darvish gave up one run and struck out seven in five-plus innings.

Bellinger, the likely NL Rookie of the Year, had 39 regular-season homers but was 1-for-12 in the series before his opposite-field homer made it 2-0 in the fifth inning.

"I have been trying to hit it the other way so it felt good," said Bellinger. "We got to keep going and stay sharp."

Elsewhere, the World Series champions Chicago Cubs gained the upper hand in their NLDS with a 2-1 win over the Washington Nationals.

The victory put the Cubs up 2-1 in the best-of-five series with a chance to close it out at Wrigley Field on Tuesday.

Anthony Rizzo put the Cubs ahead in the eighth inning with a run-scoring single to shallow center field. Cubs closer Wade Davis pitched a scoreless ninth to preserve the win.

Nationals starting pitcher Max Scherzer held the Cubs hitless for 6 1/3 innings before surrendering a double to Ben Zobrist in the seventh. Albert Almora followed with a run-scoring single off of reliever Sammy Solis that tied the game at 1-1.

In the other ALDS game, Aaron Judge capped a four-run second inning with a two-run double as the New York Yankees clobbered the Cleveland Indians 7-3 to even their series at two games apiece at Yankee Stadium.

The series winner will face the Astros for a spot in the World Series.

The decisive game five is on Wednesday in Cleveland, where the Indians will be looking to snap a five-game losing streak in elimination games.