Pressure on Matsuyama in WGC-HSBC Champions defense in Shanghai 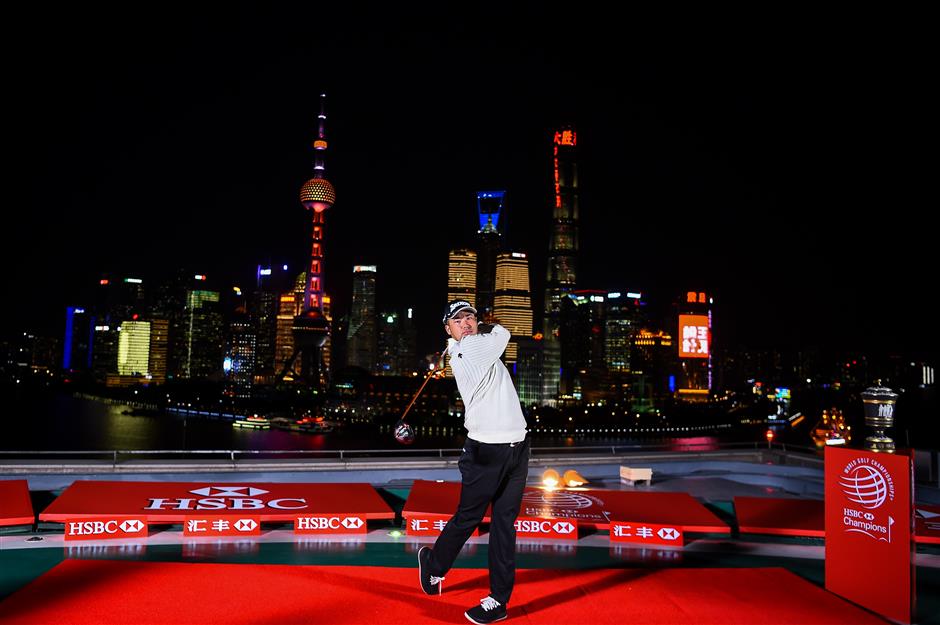 Hideki Matsuyama of Japan poses during the launch event for the World Golf Championship-HSBC Champions in Shanghai on October 24, 2017. The tournament tees off at Sheshan International Golf Club on October 25, 2017.

Defending champion Hideki Matsuyama admitted on Wednesday that he is under pressure to replicate the storming performance that propelled him to WGC-HSBC Champions glory in Shanghai one year ago.

The Japanese opens his defense of "Asia's major" on Thursday alongside world No. 1 Dustin Johnson of the United States and fast-rising Spaniard Jon Rahm.

The trio are among the headline attractions of a star-studded field at the US$9.75-million showpiece event at Sheshan International Golf Club.

Other leading contenders at the tournament, which is on the US PGA Tour and European Tour, include last year's runner-up Henrik Stenson, Olympic champion Justin Rose and a clutch of current and former major winners in Phil Mickelson, Jason Day and Brooks Koepka.

The 25-year-old Matsuyama became the first Asian to win a World Golf Championship a year ago, and it was the catalyst for a brilliant run that also delivered the WGC-Bridgestone Invitational title in August.

Matsuyama and Johnson have a stranglehold on WGC events, splitting the last five between them — two for the Japanese and three to the American.

"It is different coming back as defending champion," said Matsuyama, the world No. 4, who seared his way to victory last year by a comprehensive seven shots from the Swede Stenson and Daniel Berger of the US.

"I don't want to put a lot of pressure or expectation on myself, I just want to let the tournament come to me, like it did last year.

"All I can do is try to play my best and hopefully I will play well."

Making Matsuyama's task all the harder, he will also have to contend with a growing challenge from the home golfers.

Prime among the Chinese who will hope to be in the mix on the final day on Sunday are Li Haotong, a rising talent who underlined his potential with an eye-catching third-place finish at the British Open in July.

Matsuyama said he believes Asian players still have a gap to close on the top American and European players, with the top three in the world all from the US — Johnson, Jordan Spieth and Justin Thomas.

And he said that having got close to the top of the world rankings, he now had a battle to stay there, particularly with the likes of the powerful Rahm coming up fast behind him.

"To stay on top and continue on top, I am still learning how to do that," said Matsuyama.

"That's one of my goals and one of the things that I'm working on now is to be able to stay on top of my game."

Top-ranked Johnson has mastered the tournament before, winning it in 2013, and given his form in WGC events it would be a surprise if he fails to challenge this week.

"I'm always excited to come here and I've had a lot of success in this tournament, it's something I look forward to," he said.

"My game is getting there, I had three weeks off so a little rusty but hopefully I knocked all of the rust off today (practicing)," added the 33-year-old American, who spent the time off doing gym work and a spot of fishing.

Rahm has never played the WGC-HSBC Champions before and the 22-year-old is relishing tasting golf in China.

"I can't wait for the tournament to get started, the course is in great shape, it's a beautiful course that I think suits my game well," said Rahm, the highest-ranked European in Shanghai at five in the world.

Stenson, ranked No. 9, is hoping to go one better than 12 months ago.

"I wasn't really in the mix for winning the tournament, Hideki was playing outstanding and left everyone in the dust so it was more of a race for second," said the 41-year-old.