Fowler rallies with 61 to win in Woods' return 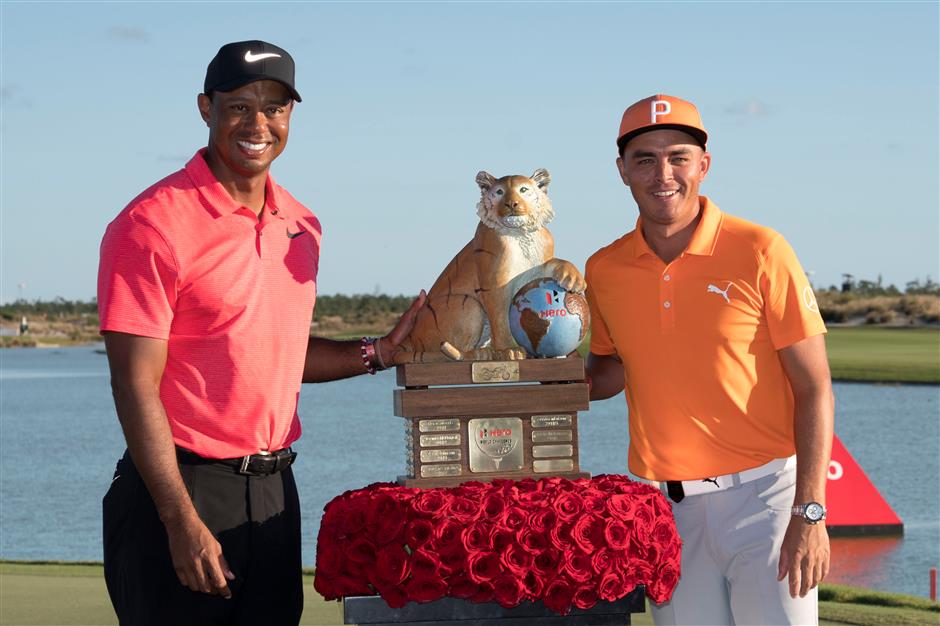 Tiger Woods (left) poses with winner and American compatriot Rickie Fowler after the final round of the Hero World Challenge at Albany Golf Club in New Providence, the Bahamas, on December 3, 2017.

Rickie Fowler was the first player to offer a scouting report on Tiger Woods ahead of his celebrated return to golf, hinting that Woods was hitting it "way by" him in some of their matches in Florida.

Fowler's own game apparently was in pretty good shape, too.

Seven shots behind to start the final round of the Hero World Challenge, Fowler opened with seven straight birdies on Sunday and closed with an 11-under 61 to set the course record at Albany Golf Club in New Providence, the Bahamas, and win by four shots over fellow American Charley Hoffman.

Fowler played twice with Woods before he was runner-up at the OHL Classic in Mexico, and then a couple of more times before Thanksgiving.

"I think he sharpened me up a little bit," Fowler said with a grin. "I've gotten a little scared of how good he was playing at home, thought I needed to start playing a little bit better or something."

Fowler and Woods each had cause for celebrations, large and small, in the Bahamas.

Fowler won his second title of the year, making it the second time he has ended a year with multiple victories worldwide. Woods made a return to golf that was solid with his health and his game, and he headed into the holidays thinking about a schedule for 2018.

"I'm excited," Woods said after closing with a 68. "This is the way I've been playing at home."

In a week that began with so much curiosity over how Woods would perform, he had his best result in four years. More than his score, he looked strong from start to finish, including a vicious recoil on a 2-iron he hit from 265 yards on the third hole that ran over the back of the green.

Playing for the first time in 10 months while recovering from fusion surgery on his lower back — his fourth back surgery in three years — Woods shot another 31 on the front nine and closed with back-to-back bogeys to tie for ninth in an 18-man field.

It was his best result since a playoff loss at this holiday event in 2013 at Sherwood Country Club in California.

Then again, Fowler didn't give anyone much of a chance.

Fowler, whose lone PGA Tour victory this year was at the Honda Classic, was close to flawless on the front nine. He holed birdie putts of about 12 feet on the first two holes, hit a gap wedge to 3 feet on the par-5 third, made his toughest putt into the green from 15 feet on No. 4, and then holed a bunker shot on No. 5. He followed that with another wedge that spun back to a foot on the par-5 sixth, and he hit out of a bunker to about 7 feet on the next hole.

"I knew I needed to get off to a quick start to at least show Charley I was there," Fowler said.

By then, he was tied for the lead as Hoffman, who birdied his first hole, began to drop shots. Hoffman never caught up and shot 72. 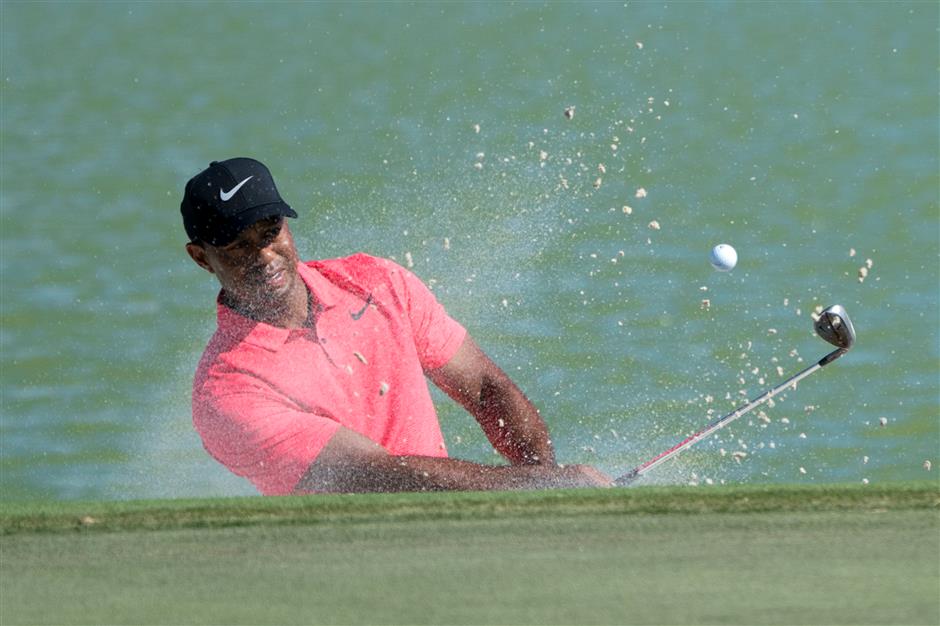 Tiger Woods hits out of the bunker on the ninth hole during the Hero World Challenge final round in the Bahamas on December 3, 2017.

Tommy Fleetwood, the Race to Dubai winner from England who is getting married on Tuesday in the Bahamas, closed with a 67 and tied for third with Jordan Spieth (69), who has not finished out of the top 10 since the PGA Championship.

A year ago, Woods returned from a 15-month hiatus from back surgeries and showed flashes of his old self, particularly when he shot 65 in the second round and ended the week with 24 birdies. Woods said nothing about his health that week, though his back couldn't withstand the rough at Torrey Pines and the 16-hour flight to Dubai. He withdrew after one round at Dubai with back spasm and had the fusion surgery in April.

This return was different from how far he hit the ball with plenty of speed in his swing (his ball speed approached 180 mph), and he made more putts from the 8- to 15-foot range than he has in recent years.

Conditions were far tamer for the final round and Woods got off to a strong start , buoyed by driving the par-4 seventh green and curling in a 25-foot eagle putt. His birdie on No. 9 gave him another 31 on the front — his second such score in two days — and never ending interest from the gallery. On Sunday, that included his two children dressed in red shirts, and tennis great Rafael Nadal.

"He's obviously a lot more upbeat, a lot more positive, a lot healthier than he was last year at this time," said Justin Thomas, the PGA Tour player of the year who was paired with him in the first and final rounds. "He's got a lot of energy. It's just so weird to say that you're excited for somebody else's year, but it will be a fun year. And I hope we duel it out a lot this upcoming year."

Woods appears to be back, at least to playing.

He has not said where he will start in 2018. The best bet is the Farmers Insurance Open at Torrey Pines, where he has won eight times.

"I don't know what my schedule is going to be, but my expectations are we'll be playing next year," he said. "How many? Where? I don't know yet, but we'll figure it out."