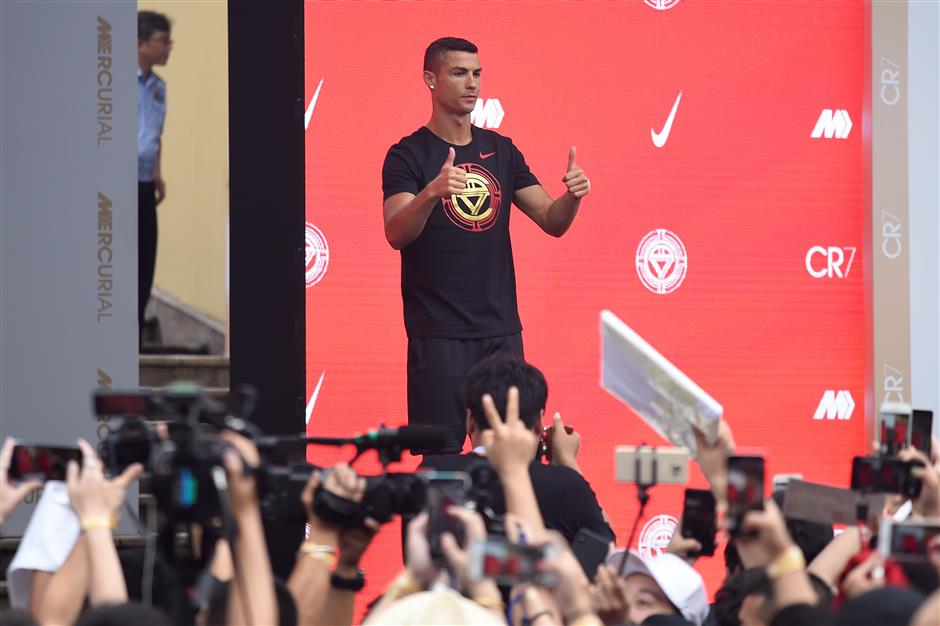 Portuguese footballer Cristiano Ronaldo gestures the thumbs up as he attends a promotional event in Beijing on July 19, 2018.

From the airport to Nike stores, from the hotel to the Palace Museum, wherever Ronaldo went, he was cheered by fans coming from all around the country just to take a look at their football idol. Apart from signing jerseys and taking selfies with his dedicated fans, the decorated star had more to offer to the football-loving country.

Ronaldo provided his suggestions for Chinese football in an interview. "Give opportunities to the kids, give them good possibilities, good pitches, open doors for them because the kids are the future," the five-time UEFA Champions League winner said.

Ronaldo has contributed his share to the development of Chinese football as he donated a pitch to a primary school in Longxi County, Gansu Province, in his first visit to China last year.

With the pitch completed in May, more kids can taste the joy brought by football. "Keep going, work hard, believe in yourself and never give up," was the advice that the Euro 2016 champion gave to the young players in China.

He also expressed his wish to see a Chinese player like him or even better than him. Ronaldo also talked about his own future at Italian Serie A powerhouses Juventus.

"I'm so happy. It's one of the most important clubs in Italy. It's great for me to have the opportunity to play there," Ronaldo said. "I hope to start well. I hope to win important things for the club, for me and for my teammates. I will try to make the Italian fans happy. This is what I am looking for," he added.