Li ready to rise to the occasion at Presidents Cup

International Team member Li Haotong is planning to showcase the growing strength of Chinese golf to the world by producing a winning display against a Tiger Woods-led United States Team in the Presidents Cup at the Royal Melbourne Golf Club, Australia, next week.

The 24-year-old Li will become the first golfer from the Chinese mainland to feature in the biennial team competition from December 9-15, an accomplishment he hopes will add further spark for the game to reach greater heights in his home nation.

A two-time European Tour winner, Li qualified automatically as one of the top eight golfers for Ernie Els’ International Team and he is determined to ensure a memorable debut by helping the team lift the Presidents Cup. Since 1994, the International Team has won the Cup only once in 1998 when it was played at Royal Melbourne.

“Everyone in the team must play as best as we can. Then we may have a chance to win. It definitely means a lot to me to be on this team,” said Li. “I was quite close to be in the team in the last edition. I feel I put a lot of effort to get into this team. I just want to go there (Royal Melbourne) and show my golf to the world.”

After launching his career by winning the inaugural PGA Tour Series-China Order of Merit in 2014 following a three-win season, Li has blossomed into a leading international star. One of his triumphs on the European Tour came at the 2018 Dubai Desert Classic where he defeated reigning FedExCup champion Rory McIlroy of Northern Ireland with a final-hole birdie after battling head-to-head in the final round.

Earlier this year, the tenacious Chinese showed his match play prowess by progressing into the knockout phase at the World Golf Championships-Dell Technologies Match Play after defeating Ryder Cup star Alex Noren of Sweden and world No. 1 Brooks Koepka of the United States in the group stage. When he represented Asia in the 2018 EurAsia Cup in Malaysia, he was unbeaten in three matches, finishing with a 2-0-1 record.

He knows all eyes will be on him in Australia. 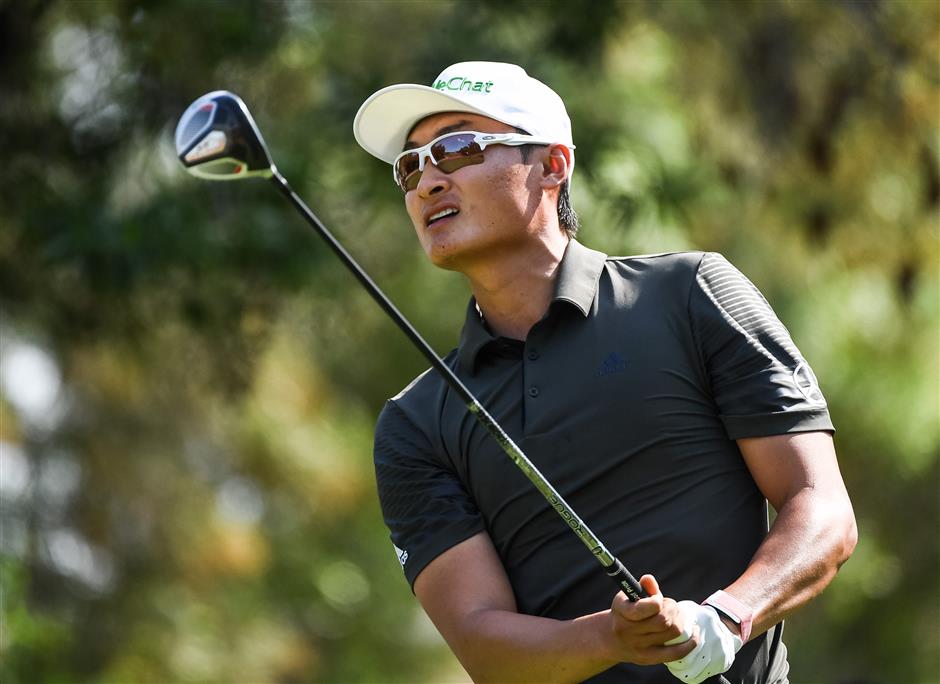 Li Haotong of China watches the ball after teeing off on the third hole in the second round of the DP World Tour Championship in Dubai, United Arab Emirates, in this November 22, 2019, photo.

“As Chinese golfers, it is our responsibility and obligation to promote Chinese golf to the world and I’m proud to be one of them. I think we should try hard with better performances to show Chinese golf,” the Hunan Province native said.

Li has forged a close friendship with South African legend Els, whom he played with during the final round at the 2017 Open Championship and shot a closing 63 to finish third for his best result in a major.

“Ernie is a very special person to me personally. He has a lot of experience and I can learn a lot of great things from him. It’s my honor to be part of his team,” said Li. “Hopefully I can get some points, especially against Tiger and the best golfers in the world. I’m very excited to get there. To be fair, our team is not as strong as the US Team. So we just want to play our best and hopefully beat them.”

With CT Pan of Chinese Taipei also making his debut for the International Team, there is every likelihood that Li and Pan will be paired by Els in either the four-ball or foursomes sessions at Royal Melbourne. Li is looking forward to returning to Melbourne where he received plenty of local support when China finished joint second at the World Cup of Golf in 2016.

“I have talked a lot with CT during tournaments. It would be great (to play together),” he said. “I’ve been to Melbourne a couple of times and I just want to be back again. It will be incredible for sure and the people will support us.”

Li is looking forward to the day when China has the opportunity to host the Presidents Cup. Since the event’s inauguration, South Korea remains the only Asian nation to have hosted the prestigious team event in 2015.

“I think such events will help promote Chinese golf a lot. I’m looking forward to having the Presidents Cup in China one day. It will have a positive impact on Chinese golf,” he said.