Portuguese motorbike rider Paulo Goncalves has died after a crash in the Dakar Rally on Sunday, the 40-year-old becoming the gruelling motorsport marathon's 25th fatality.

Goncalves suffered the fatal accident after 276 kilometers of the seventh stage from Riyadh to Wadi ad-Dawasir.

"The organizers received an alert at 10:08 (0708 GMT) and dispatched a medical helicopter that reached the biker at 10:16 and found him unconscious after going into cardiac arrest," a statement on the rally's official website reported.

"Following resuscitation efforts in situ, the competitor was taken by helicopter to Layla Hospital, where he was sadly pronounced dead," it added.

Dakar director David Castera revealed it was Australian defending bike champion Toby Price who was the first to discover the stricken Goncalves lying on the sand.

Goncalves was competing in his 13th edition of the Dakar. He made his debut in 2006 when it was staged in Africa, and took second to Marc Coma in 2015 in South America.

"Paulo was someone who had been around for a long time, who we all knew, who was a feature of the rally," Castera said.

"So this is a very difficult time."

Ignacio Casale, leading the quad standings, said that "from the moment I saw the crash, I was unable to focus.

"I spent the rest of the stage thinking about it. The result doesn't really matter today."

The Indian-backed Hero Motosports rider only made it to this year's first Dakar staged in Saudi Arabia after recovering from a ruptured spleen in a crash in his native Portugal in December.

Following surgery he said before the rally got under way: "It's a victory for me to be here at the start."

Goncalves was placed 46th in the overall bike standings after Friday's sixth stage.

His death cast a pall over the seventh stage action won by Carlos Sainz in a Mini with Joan Barreda timing fastest in the bike category.

The last Dakar competitor to be killed was Polish rider Michal Hernik in 2015 in Argentina.

"The entire Dakar caravan would like to extend its sincere condolences to his friends and family," the organizers' statement said. 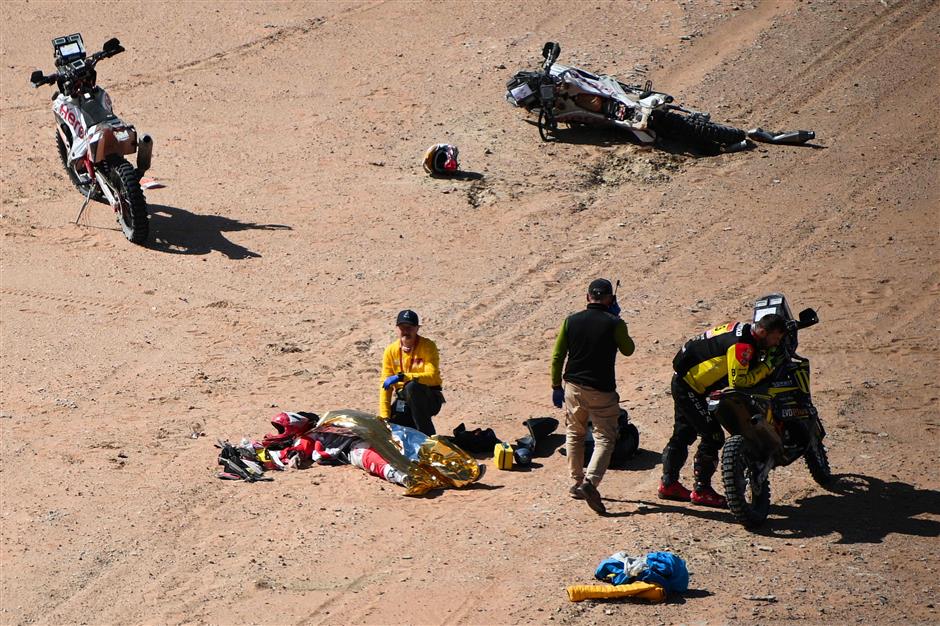 Hero Motosport's Portuguese motorbike rider Paulo Goncalves (center) is attended to by medical staff after a crash during the Stage 7 of the Dakar 2020 between Riyadh and Wadi ad-Dawasir, Saudi Arabia, on Sunday. Goncalves died later in hospital.

With 20 of the 25 Dakar deaths since the inaugural edition in 1979 made up of bike riders Castera dwelt on the risks faced by riders.

"We know that bikes are dangerous.

"You set off in the morning, you have a knot in your stomach sometimes because you don't have any protection, you have nothing.

"They all know that, these riders," said Castera, a veteran of five Dakars on a motorbike.

Portuguese President Marcelo Rebelo de Sousa in an official statement said Goncalves had died "attempting to accomplish the dream of winning one of the most dangerous and toughest rallies in the world".

He described him as "a highly distinguished" sporting ambassador for Portugal while Portuguese MotoGP rider Miguel Oliveira paid tribute to Goncalves' "courage and bravery".

On a sombre day in the desert Sainz tightened his grip on the overall car standings with his third stage win of this year's edition.

Sainz, a two-time former world rally champion, is in a strong position to add to his Dakar wins in 2010 and 2018.

Barreda came out on top in the bikes category with American Ricky Brabec retaining his overall lead finishing fourth on the day.