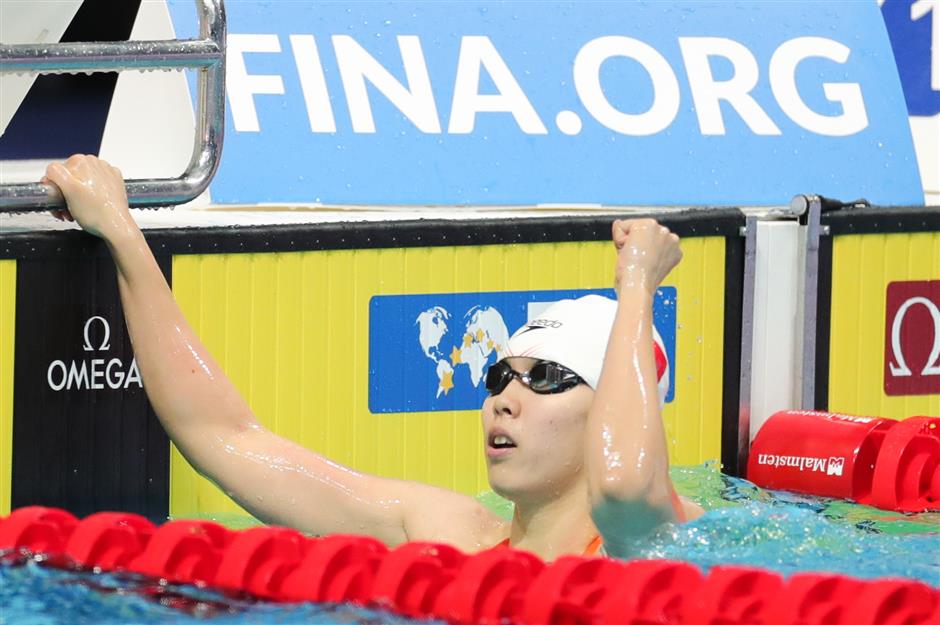 China's Yang Junxuan celebrates after winning the gold in the women's 200m freestyle at the 19th FINA World Championships in Budapest, Hungary, on Tuesday.

Chinese swimmers grabbed their chances on the fourth day of the 19th FINA World Championships, winning a historic gold in artistic swimming, another gold and a bronze medal in the women's 200m freestyle on Tuesday.

China's Yang Junxuan won the 200m race with a time of one minute and 54.92 seconds, while her 18-year-old teammate Tang Muhan took the bronze medal with 1:56.25. The silver medal went to Australian swimmer Mollie O'Callaghan in 1:55.22.

Earlier, China made history as they clinched the women's team technical for the first time, collecting a total of 94.7202 points in the final 12 teams. The Japanese team got the silver, with a score of 92.2261 points, while Italy came third with a slightly lesser score of 91.0191 points.

This is Hungary's first gold at the worlds and Leon Marchand of France finished second by 1:53.37 and Tomoru Honda of Japan third in 1:53.61.

Nic Fink won the second gold of the day for the US in men's 50m breaststroke with a time of 26.45 seconds, narrowly beating Italian Nicolo Martinenghi's 26.48 and teammate Michael Andrew's 26.72.