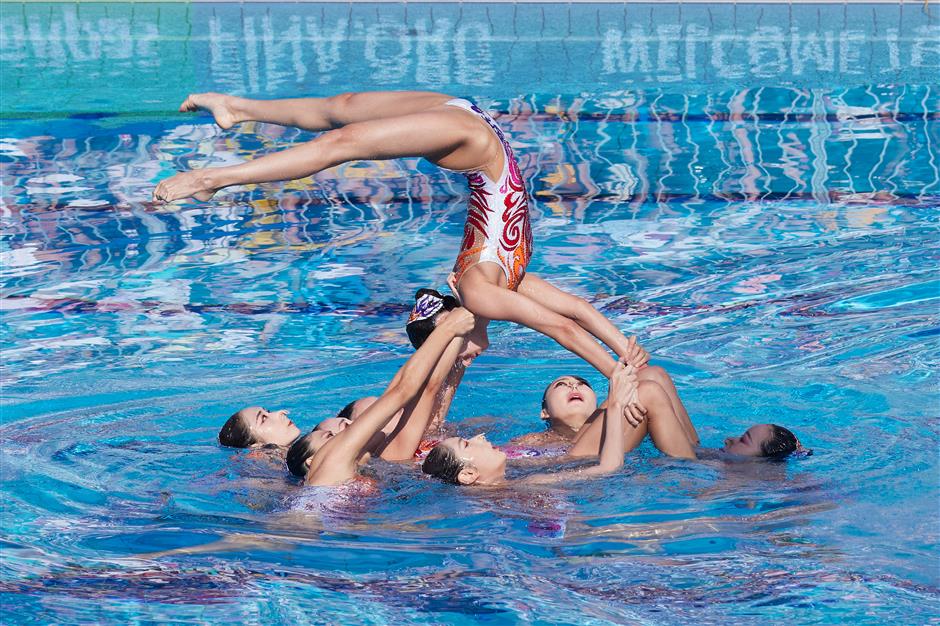 The Chinese team in the team free artistic swimming at the 19th FINA World Championships in Budapest, Hungary, on Friday.

China showed its prowess in artistic swimming, winning the fourth title as it took the women's team free final victory at the 19th FINA World Championships on Friday.

The Chinese team, which also triumphed in the team technical on Tuesday, earned the highest score of 96.7000 points. Ukraine came second with 95.0000 points, followed by Japan with 93.1333 points.

It is also the fourth gold for twin sisters Wang Liuyi and Wang Qianyi who won gold for China in the women's Duet Free and Duet Technical as well as the team technical.

China now leads the artistic swimming medal table with four golds and one bronze, ahead of Japan and Ukraine.

Coach Zhang Xiaohuan said: "They grow up through the tournament. They are still young, but when they are facing the difficulties, they don't step back."

Shi Haoyu and Zhang Yiyao will compete in the mixed duet free final on Saturday and have a chance to shoot down the fifth gold for China.

Zhang Xiaohuan said: "I hope they don't have any pressure to compete and enjoy the moment in the water. I hope our Chinese athletes are more energetic, more confident, and show their love for the performance."

After winning silver medals in the duet and team events at the Tokyo Olympic Games last year, only three Olympians, Feng Yu, Xiao Yanning and Wang Qianyi, were present in the 13-member team sent to the World Championships. To achieve such a good result in the tournament, Zhang Xiaohuan conveyed a special word of gratitude to "Master" Wang Jie.

"It takes us seven months to form up a new team of veterans and newbies. My predecessor Wang Jie, who coached me over 30 years, gave me and the squad lots of help, from the agenda of the training to the adjustment of the competitions. Coach Wang Jie is a big help," Zhang added.

Saturday will see the finals of the mixed duet free and women team highlight in artistic swimming.

﻿
Special Reports
﻿
Livestreamers on the carpet: Be careful what you do and say
Can't get into your favorite hotpot restaurant? Try their milk tea instead!
Hangzhou designates June 24 as West Lake Day
What are the CPC congresses and who will attend?
Beijing reports two new local COVID-19 infections
China steps up support for unemployed college graduates
First batch of children with dwarfism benefit from new drug
Chinese police seize 4.26 tonnes of drugs in border areas
Poster designed by Chinese artist jazzes up major music festival
Fast statistics: Shanghai's remarkable progress in past 5 years
EXPLORE SHINE