Opening up to further economic innovation

Suzhou, one of the leading lights of reform and opening-up in China, is to take even bigger pioneering strides in transforming the economy of the region.

Plans were draw up at a conference on further opening-up in Suzhou on January 3 at Jinji Lake, attracting around 3,000 people including entrepreneurs and skilled talent from home and abroad.

High-rise office buildings in the Suzhou Industrial Park stand only 8 kilometers away from Suzhou Old Town, which has long preserved its ancient landmarks, including the iconic picturesque small bridge, flowing water,  cultural relics and classic gardens.

“At the beginning of the year, Suzhou took action to show its determination to further open up. I think it’s very surprising and valuable,” said James Chou, general manager of Wistron Smart Devices global manufacturing in Wistron Corp.

Wistron has been doing business in Kunshan, Suzhou, for 19 years now.

“We will take the opportunity to accelerate the promotion of intelligent manufacturing and support the high-quality development for the integration of the Yangtze River Delta region,” Chou said.

During the conference, a total of 556 project agreements were signed, with a total investment of 736 billion yuan (US$106 billion).

Opening-up has made today’s Suzhou a success and it will determine its future. 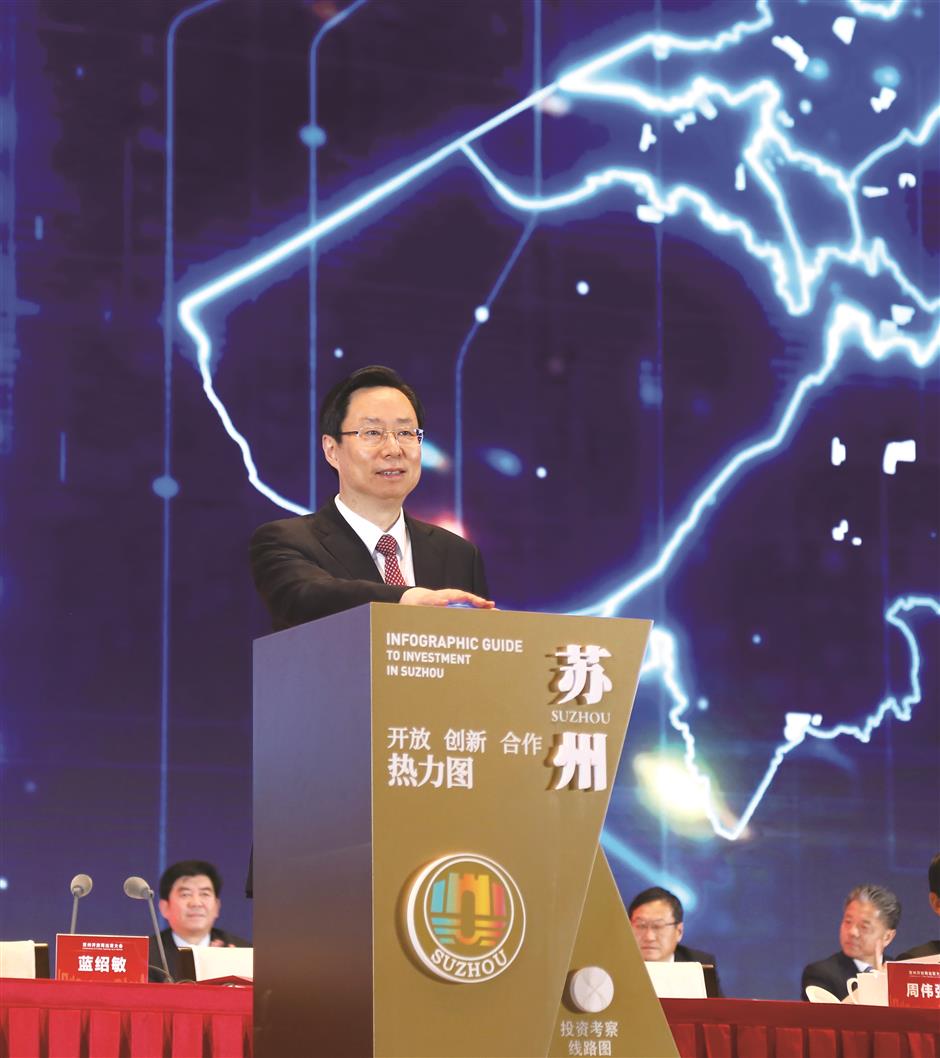 Suzhou, which relies on an export-oriented economy with heavy investment from overseas, is facing great changes in the world trade system, such as the layout of international labor and the supply of its workforce among several other factors.

However, there are opportunities along with the challenges.

The Central Economic Working Conference believes opening-up should continue to move toward a wider range, a wider field and a deeper level.

Lan Shaomin, Party secretary of Suzhou, delivered a speech at the conference, emphasizing that further opening-up is the way to create another miracle.

“How to integrate into the national strategy, turn strategic opportunities into development dividends, and once again put on Suzhou’s ‘wings’ for takeoff,” Lan said. “The ‘wings’ must be further opened up.”

Fang Wenbang, director of Suzhou bureau of commerce, said that opening-up is not just about attracting foreign investment.

Liu Zhibiao, director and chairman of the Yangtze IDEI of Nanjing University, said, “The connotation of opening-up has changed.

“We should make use of the advantages of the large-scale market to attract global factors to start businesses and innovate in China, and open to domestic private enterprises and talent.”

In order to promote the integration of multiple innovation factors, Suzhou has given priority support to the introduction of Nobel laureates’ laboratories, major R&D institutions and interdisciplinary innovation platforms.

In addition, Suzhou has decided to use biomedicine as its most competitive and influential industrial landmark. 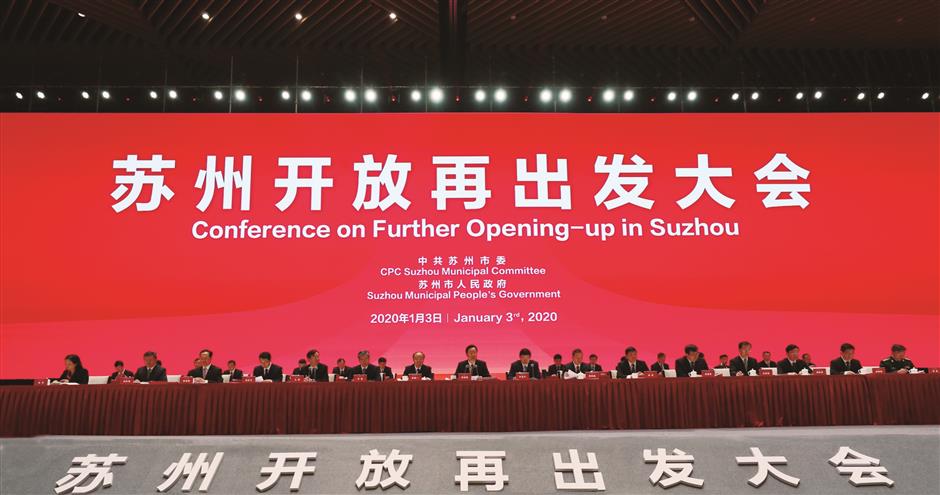 The conference on further opening-up has attracted around 3,000 people including entrepreneurs and skilled talent.

By 2022, the scale of output value will exceed 280 billion yuan, creating a biomedical cluster with the most innovative products, the most complete industrial chain and the latest R&D cooperation mode in China.

Suzhou will also shift the policy toward high-end manufacturing and internationalization and encourage foreign investment to participate in the construction of 10 advanced manufacturing clusters, each worth 1 billion yuan, in a further opening environment through joint ventures, collaborative innovation, mergers and acquisitions.

It encourages enterprises to develop new forms and models of service trade at the same time.

With a total investment of 1.4 billion yuan, the third Asia-Pacific plant of Neuhausen am Rheinfall, Switzerland-headquartered SIG Combibloc, is under construction in Suzhou Industrial Park. It is expected to be completed and put into operation in October.

The global food and beverage packaging giant not only has two Asia-Pacific factories in Suzhou, but also has the largest technology center in the area.

“The new factory is built according to the standard of green intelligent factory, which not only expands the scale, but also improves the grade, and focuses on high-end products.

In the future, we will rely on China’s huge market advantage to lead the road of R&D,” said Sha Haitao, director of operation and supply chain of SIG Combibloc Suzhou plant.

In recent years, from Huawei to Microsoft, more and more well-known enterprises from home and abroad have established R&D institutions in Suzhou.

Suzhou plans for future development in a higher coordinative system, using innovation-driven and a value-chain to enhance the weakening of hedging profitability, and increasing the cultivation of new global competitive advantages.

Suzhou authority proposed, by the end of 2022, the number of high-tech enterprises in the region should hit 14,000, including 3,000 foreign-funded enterprises.

Within three years Suzhou is targeting 10,000 skilled talent in urgent need of high-quality development. And, from that number, overseas workers should be no less than 50 percent.

Xu Jiabin, a professor at the Business School of Renmin University of China, said that in the future, Suzhou should strive to make a breakthrough in core technologies and cultivate world-class emerging industrial clusters.

“To improve the overall competitiveness of the economy through ‘two wheels’ — innovation-driven and reform and opening-up,” Xu said.

Loh Tuck Wai, consul general of Singapore in Shanghai, was attracted by an album in front of him as soon as he sat at the venue. This is the first “Infographic Guide to Investment in Suzhou” to the world, including recommended routes for an on-site investment survey, map of development platforms and premises, map of industrial lands and investment and cooperation opportunities, providing information for global capital to choose Suzhou and invest in Suzhou.

“With this infographic guide, it’s more convenient for me to convey Suzhou’s further opening-up policy to Singaporean enterprises, and more accurately recommend them to Suzhou for innovation and entrepreneurship,” Loh said.

“This practice is very good, especially in line with the international trend.”