The total industrial output of enterprises with an annual income of over 20 million yuan (US$2.99 million) in Suzhou reached 1.55 trillion yuan in the first half of this year, a remarkable achievement amid the COVID-19 pandemic.

Suzhou is one of the three cities in China with the greatest industrial strength.

All three have distinctive characteristics. Shanghai is a traditional industrial city with a strong brand, while Shenzhen is the one with innovation, and Suzhou is an industrial city dominated by the external economy.

From the emergence of township enterprises to the rapid development of an export-oriented economy, its industrial output of 3.36 trillion yuan in 2019 was among the best in the world.

Looking ahead, Suzhou will enhance its tie with Shanghai and learn from Shenzhen, a point stressed at a recent conference chaired by Xu Kunlin, newly appointed Party secretary of Suzhou.

“We should gain more experiences in taking the lead in forming a new development mode, being a pioneer in scientific and technological and industrial innovation, and accelerating the building of a new highland of reform and opening-up,” Xu said.

After the conference, Xu visited Suzhou’s Wujiang District, which is located inside the Demonstration Zone of Integrated Green and Ecological Development of the Yangtze River Delta Region. 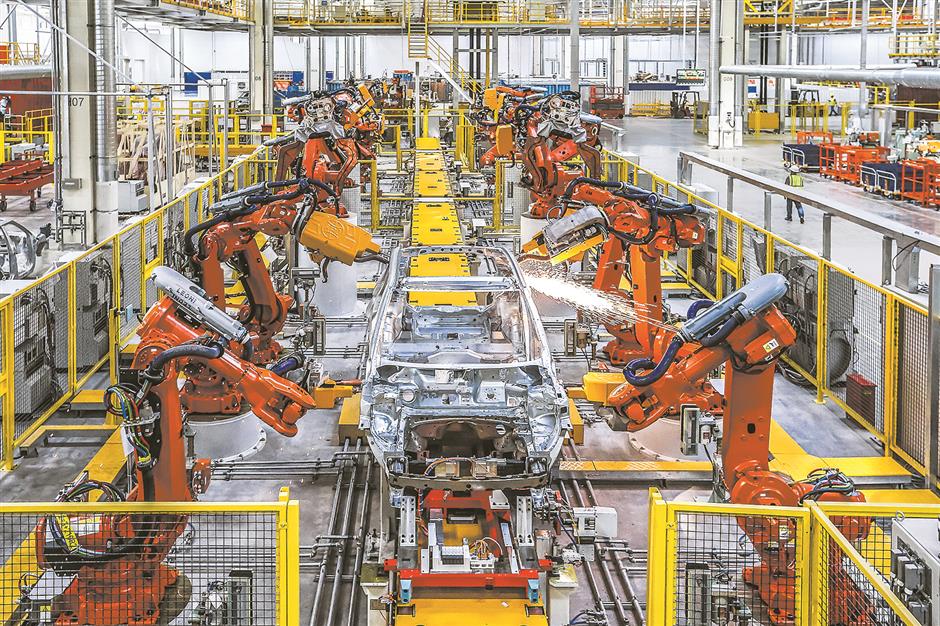 As a close neighbor of Shanghai, Suzhou is the city’s best partner in promoting the integrated development of the region due to its powerful industrial strength.

There is plenty of data to support this. First of all, pillar industries have grown steadily. The output of electronic information, electrical machinery and the steel and special equipment manufacturing industries increased by 2.9 percent, 4.9 percent, 6.7 percent and 4.8 percent, respectively, to form the basis of Suzhou’s industrial growth.

The growth of emerging and leading industries accelerated in the first half of this year. Output of the pharmaceutical industry increased by 44.1 percent year on year, and that of integrated circuits increased by 24.9 percent. Also amazing is that the biomedicine industry in the city increased by more than six times during the six-month period.

While major cities around the country compete in terms of economic scale, Suzhou has “abandoned the competition of GDP only” and turned to high-quality development. Of course, this comes at the expense of GDP growth in short term.

Suzhou’s GDP growth has slowed in recent years, however, the city’s financial and tax revenue has been increasing, which shows that its economy is not going through “economic shock,” but is consolidating its foundations, making steady efforts and continuous improvement.

Suzhou’s eight strategic emerging industries, including new energy, new materials, biomedicine and smart grid, have achieved an output of 989.19 billion yuan in 2019, accounting for 53.9 percent of the total output of industrial enterprises with annual income exceeding 20 million yuan, which means that the city’s high-quality development is not only a victory in the initial battle, but also has stable and optimistic prospects.

The eight strategic emerging industries have laid a solid foundation for an advanced manufacturing industry cluster and realized another economic takeoff.

Suzhou now is an important production base in China for fundamental petrochemicals, medical devices, integrated circuits, automation and parts. It is also one of the eight global nano industry clusters.

Of the top 11 cities with the highest GDP in China, Suzhou is the only one at prefecture level, apart from municipalities, provincial capitals and sub-provincial cities.

In China’s advanced manufacturing city development index for 2019, Suzhou ranked first among all prefecture-level cities for the second consecutive year. Among the first 25 stocks listed on the STAR Market — Shanghai’s science and technology innovation board — three are from Suzhou.

Suzhou is proud of its performance in smart manufacturing with a number of leading enterprises in the field springing up there, completing their global layout and a whole industrial chain approach.

At the forefront of China’s reform and opening-up, Suzhou has developed into a real open city. In the process of maintaining cooperation with the China (Shanghai) Pilot Free Trade Zone, Suzhou does not only boast geographical advantages, but also has an edge in terms of an open economy, industrial development and institutional innovation.

Following the construction template of the Shanghai free trade zone, Suzhou will launch trial runs in five comprehensive bonded areas, including the Suzhou Industrial Park and the Kunshan Deepening Cross-Strait Industrial Cooperation Pilot Zone, which will be expanded to more areas in the future.

In order to seize the opportunities gained from its proximity to the Shanghai free trade zone, Suzhou has launched four innovative measures — investment facilitation reform based on “negative list” management, trade facilitation reform in the special customs supervision area, financial institutional reform marked by the development of cross-border yuan settlement and comprehensive regulatory reform through the construction of an enterprise credit system.

Construction of another Metro line linking Jiading and Minhang districts in Shanghai will kick off next year. The future inter-city railway will extend northward to Taicang in Suzhou.

In the future, Suzhou will closely focus on the national strategies for the construction of domestic and international dual economic circulation and the integrated development of the Yangtze River Delta region while maintaining cooperation and service with Shanghai.