For many international consumer goods companies, Shanghai is simply "right" as the most important location for their operations in China and beyond.

Perfetti van Melle, one of the world's biggest confectionery manufacturers, based in Italy and the Netherlands, started its Chinese business in 1994 in Shanghai and recently made the city its regional headquarters.

"The city government provides great support, creating an environment friendly for innovation and entrepreneurship, and it is attractive for all kinds of professionals," he added.

"Particularly for a fast-moving consumer goods company, Shanghai is where the market is – local consumers are open to innovative products and concepts, which gives us opportunities to get feedback and learn, and it is extremely important," Edelbluth said. 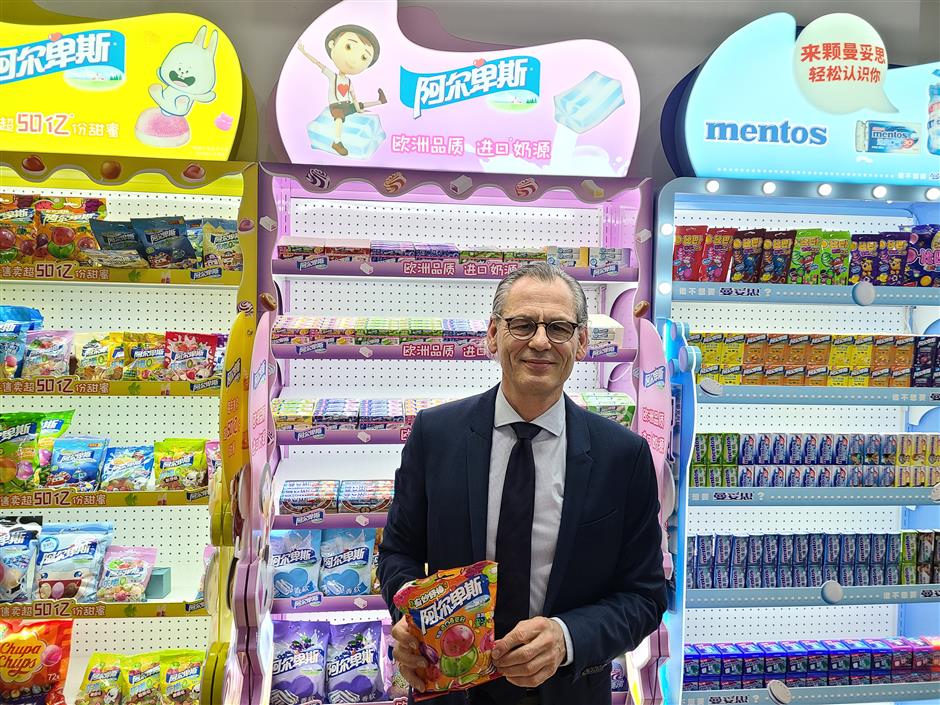 Hans-Peter Edelbluth, managing director of Perfetti van Melle China. The Italy and the Netherlands-based confectionery manufacturing giant has recently made the city its regional headquarters.

"Shanghai is delivering a perfect setup for the growth of foreign-invested companies … It is of course not the cheapest, but we have been convinced to make our home here, expecting continued government support, which is the foundation for the success of a foreign company in the market," Edelbluth said.

Indeed, Shanghai is strategic for global consumer goods companies. It was listed as one of the five leading cities in developing international consumption centers in China by the Ministry of Commerce.

The consumer market size in Shanghai is huge, with 90 percent of global premium brands having a presence in the city, according to the Shanghai Commission of Commerce. The city is also the debut stage for many international brands, ranking first in China for the opening of companies' first and flagship stores.

In the first half of this year, the total retail sales of consumer goods in Shanghai reached 904.8 billion yuan (US$139.9 billion), an increase of 30.3 percent year onyear and 7.3 percentage points higher than the national average growth.

"To be cultivated into an international consumption center is a boost for Shanghai's future development," said city Vice Mayor Chen Yin. "Shanghai is on the way to attracting more global consumption resources, upgrading its consumption functions and capacity while accelerating the construction of a modern metropolis with global influence."

So it is not strange that in the eyes of Edelbluth, Shanghai is "ambitious" as a city striving to further develop a more vibrant consumer market to support domestic circulation and serve as a junction for a dual circulation strategy.

In comparison, Shanghai is "dynamic" for Pascal Bizard, senior vice president for Decathlon China. As the world's leading retailer for sport goods, Decathlon also has made Shanghai regional headquarters of two of its subsidiary companies.

"We have been attracted by the fast economic development and quality of the business environment in Shanghai, and Decathlon is firmly rooted here," Bizard said.

"Shanghai was the first city on the Chinese mainland to introduce a specific policy of attracting regional headquarters of multinational companies. That was in 2002. And since then, Shanghai's business environment has progressed significantly, such as quicker administration approvals and more open market access conditions.

"After decades of industrialization, the average level of the 'hard' environment in Chinese cities has improved. But Shanghai is really competitive in creating 'soft' business environments," Bizard said.

French retailer for sport goods Decathlon has also made Shanghai regional headquarters of two of its subsidiary companies.

Such strength in soft power has given Decathlon special confidence to further develop in the market.

"For Decathlon, we encourage people to learn new things, and do not be afraid to take challenges," Bizard said. "They are the qualities of Shanghai consumers … Shanghai people are demanding, and it is a driver for us to become more innovative and launch more new products."

Bizard has been in Shanghai since 2000, and has witnessed the changing attitude of Chinese people toward sports. With more education, people no longer consider sports dangerous, but an indispensable part of life to stay healthy.

"People used to wear whatever was available to do sports. You could see them running on the street in jeans and improper shoes a decade ago … But it is completely different now," Bizard said.

Shanghai's fast changes have given Decathlon confidence for its future development, and it is also the place where the company can find its partners.

"We will benefit from Shanghai's dynamic innovation environment, and seek opportunities to incubate global innovation projects," he said. "There are many great companies in the world in the consumer goods industry. I see many of them in Shanghai. It is a great time for us to work together, to tap into the favorable opportunities in China's dual circulation strategy."

Besides international companies, Decathlon has also cooperated with a number of Chinese companies, which are also world leaders in the industry, and it expects to co-innovate with them, Bizard said.

The COVID-19 pandemic has reinforced foreign investors' confidence in Shanghai, as the city quickly resumed work and made efforts to recover its economy at the same time as guaranteeing people's safety.

"It is also part of the soft power," Bizard said. "If you call it 'Shanghai speed' it goes beyond our earlier definition that if people leave the city for one month, they may find a new freeway finished upon return, which is also unbelievable."

For Edelbluth, the biggest takeaway from the pandemic is the acceleration of digitization in the city.

"It changes at an amazing speed, and it is a change of people's purchasing habits that is vital for a consumer-centric company," Edelbluth said, adding that Perfetti van Melle will accelerate construction of its online business channels in the next five years.

According to the city's commerce commission, online retail sales amounted to 148.57 billion yuan in the first half of the year, up 21.2 percent from a year earlier and making up for 16.4 percent of total retail sales of consumer goods.

For Decathlon, e-commerce is also vital and the company has developed both online and offline platforms with a whole-of-industry-chain business.

"Shanghai is the entrance for the future, and Decathlon is running on the same track," Bizard said.

"In the next five years, we believe sports will be one of the fastest-growing consumption trends in China. To make new tests and do something crazy relevant in 'Sport+' Shanghai must be the best place," Bizard said.