Looking back at 20 years of China and the WTO

This year marks the 20th anniversary of China's entry into the World Trade Organization. Over the past 20 years, the world has witnessed China's great development, and China has made its contributions to the multilateral trading system.

China's foreign trade hit a record high in 2020 despite a worldwide slump in shipments, reaching 32.16 trillion yuan (US$5 trillion), which was seven times more than that of 2001.

"China welcomes all countries to share development opportunities and is willing to work with all parties to mutually safeguard the multilateral trading system with WTO at the core," the Ministry of Commerce said recently.

Shanghai Daily looks back at some important milestones along China's WTO journey.

July 11 – China became an observer of the WTO.

In November – Then Chinese Premier Zhu Rongji proposed establishing a China-ASEAN Free Trade Area, which was welcomed by leaders of ASEAN countries. 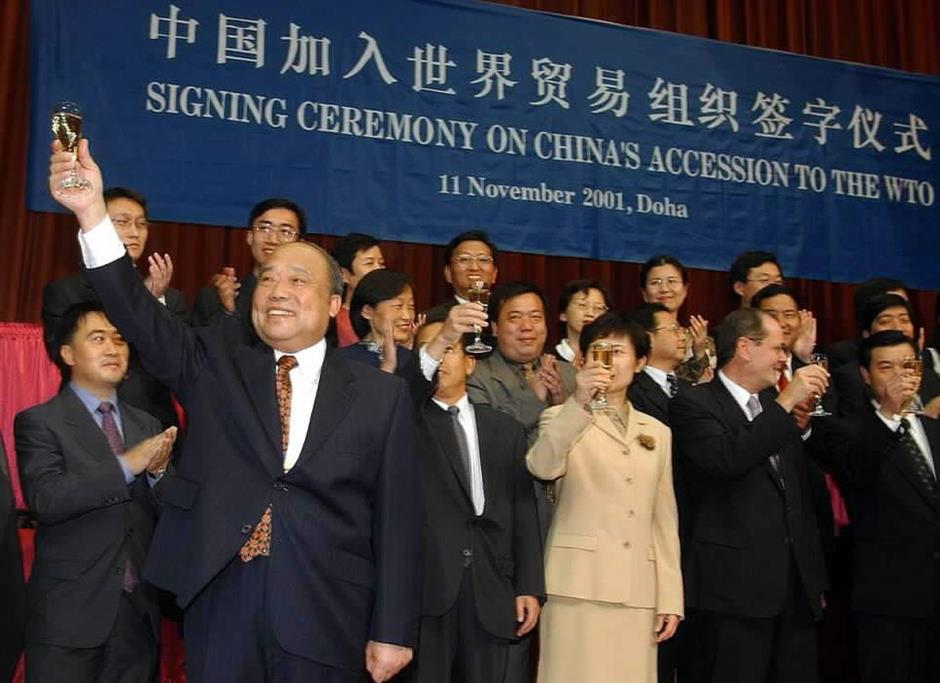 Shi Guangsheng (left), China's then minister of foreign trade and economic cooperation, makes a toast in Doha, Qatar, at the signing ceremony of China's accession to the WTO on November 11, 2001.

September 13 – China and Mexico reached a bilateral agreement on China's accession to the WTO. At that point, China had completed all two-sided negotiations with WTO members.

December 11 – China formally joined the WTO and became its 143rd member. It was a milestone in China's opening to the world.

From July 1 – China fulfilled its commitment to liberalizing foreign trade management rights, replacing the 50-year-old examination and approval system with a registration system. Since then, private enterprises have developed rapidly in foreign trade. 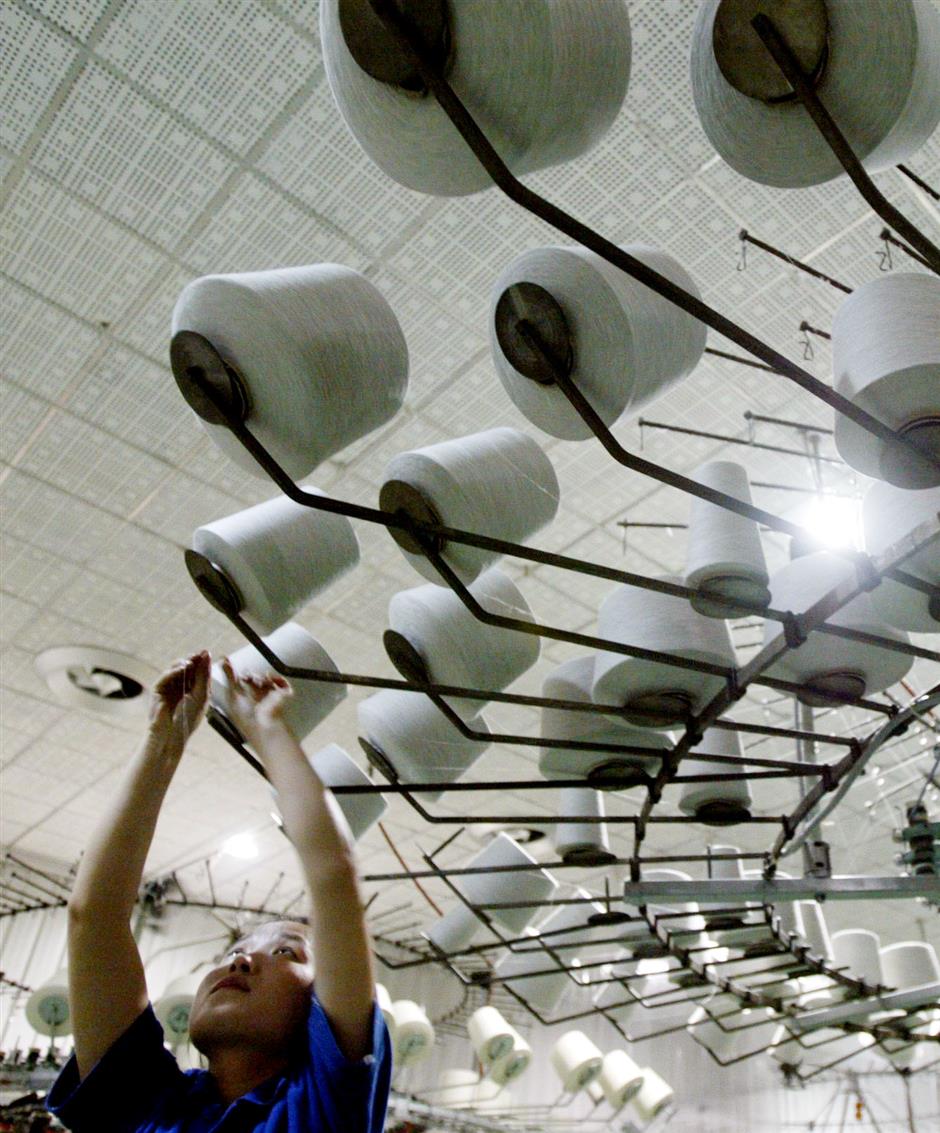 A textile worker at Threegun Group connects yarn at the company's Shanghai factory on July 11, 2005.

January 1 – The "Multifibre Agreement (MFA)," also known as the Arrangement Regarding International Trade in Textiles, was terminated, and quotas for textile exports from developing countries to developed countries were abolished. China's textiles quickly dominated the international market.

China's export trade volume accounted for more than one-third of the total GDP. 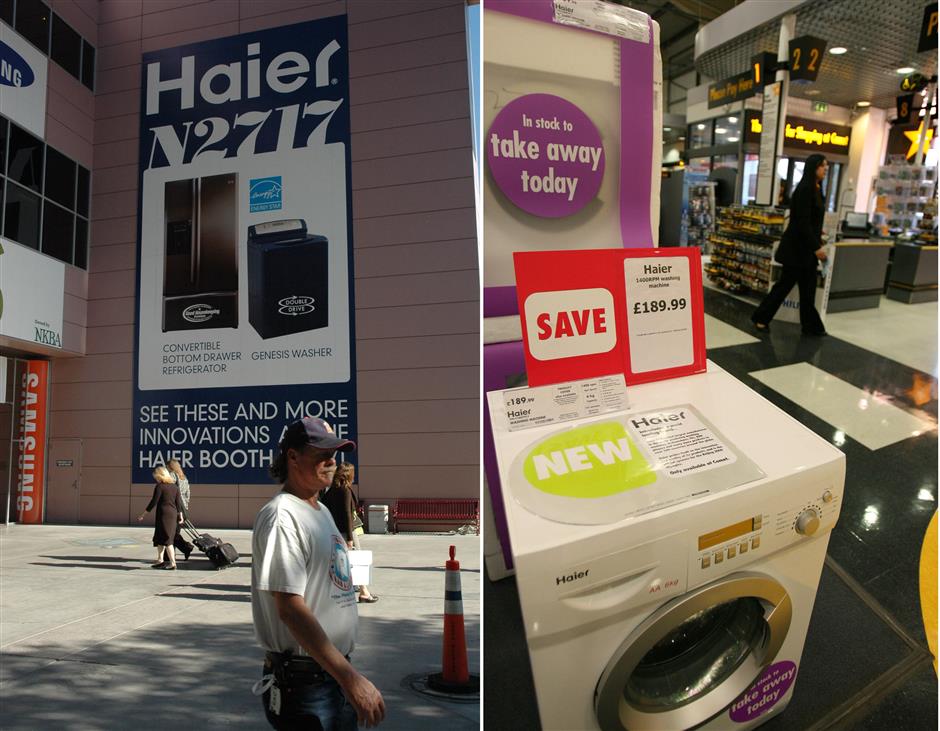 Left: People walk past a giant Haier refrigerator advertisement at the Las Vegas Convention Center in the United States on May 9, 2007. Right: Haier washing machines are placed in a COMET chain store in London on January 21, 2008.

China intensified its control of foreign trade, adopting measures such as imposing export tariffs and canceling or reducing tariff rebates on products such as steel and clothing. The growth of the surplus slowed down.

In September – A financial crisis swept the world. To stabilize exports and guarantee employment, China increased the export tax rebate of certain textiles and clothing, as well as high-value-added commodities.

For the first time, China's exports of goods surpassed that of Germany, becoming No. 1 in the world. However, due to the financial crisis, China's foreign trade experienced its first negative growth.

January 1 – The China-ASEAN Free Trade Agreement was officially launched. About 7,000 commodities in the free trade zone had zero tariffs. 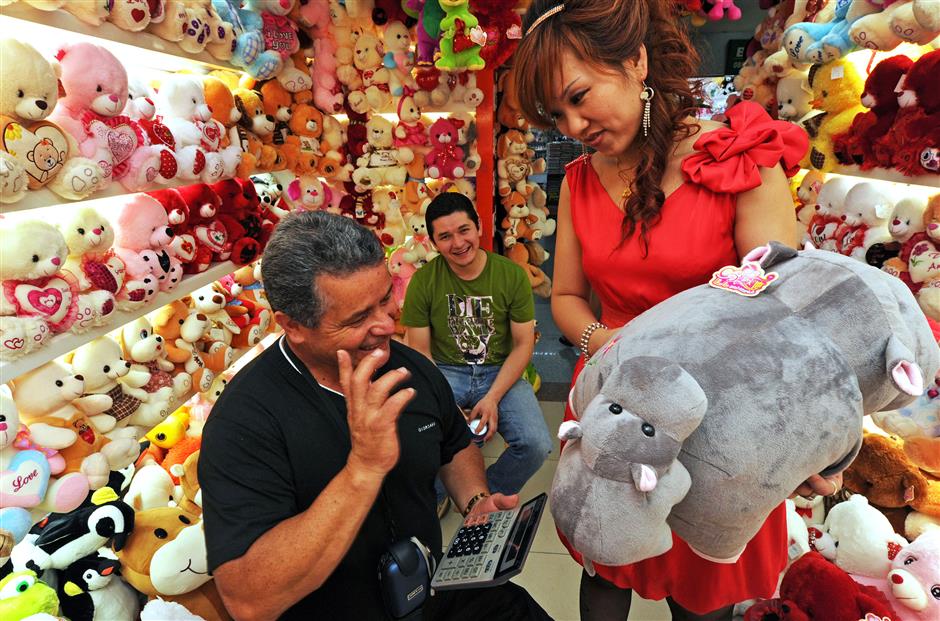 Yu Jie (right) introduces a plush toy to a South American businessman in Yiwu, Zhejiang Province, on July 17, 2011. China accounted for about 70 percent of global toy trade in 2010.

Affected by the European debt crisis, the growth rate of China's exports dropped 12.4 percentage points from the previous year.

China became the world's first country with a total trade volume of more than US$4 trillion and the world's largest trading country. 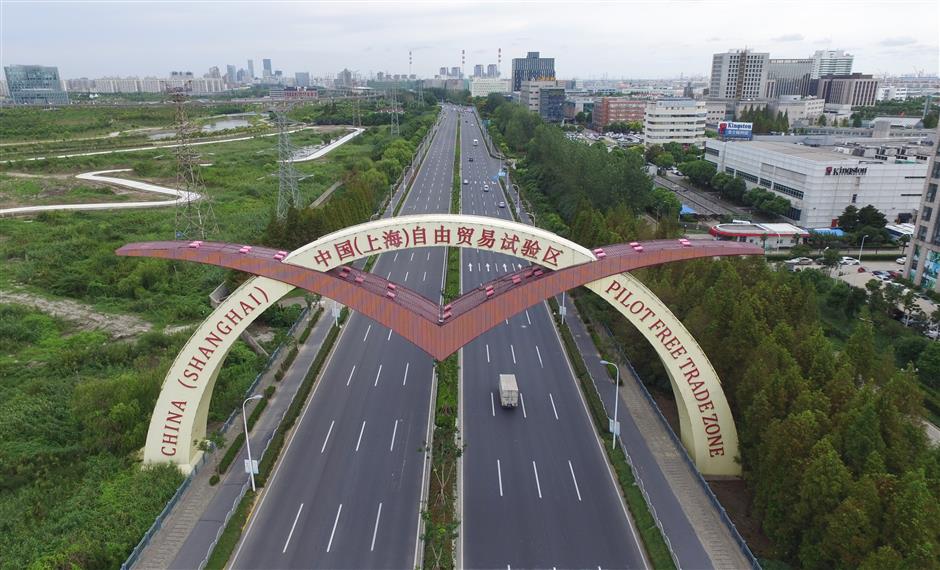 An aerial photo of the China (Shanghai) Pilot Free Trade Zone on September 29, 2013.

China's economy transformed from high-speed growth to medium-to-high-speed growth, focusing more on upgrading economic structures. The growth of imports and exports slowed down, with an annual increase of 3.4 percent. Meanwhile, cross-border e-commerce grew by 30 percent, becoming a new growth point for foreign trade.

The Belt and Road Initiative was implemented. 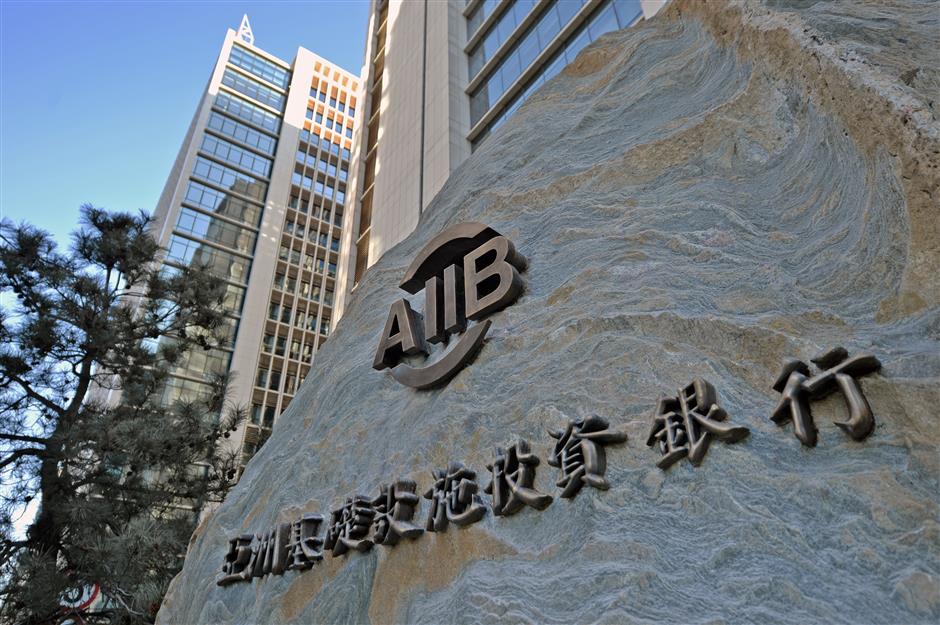 The appreciation of the RMB put pressure on exports, but China's foreign trade still achieved double-digit growth, of which the growth rate of exports was 10.8 percent. 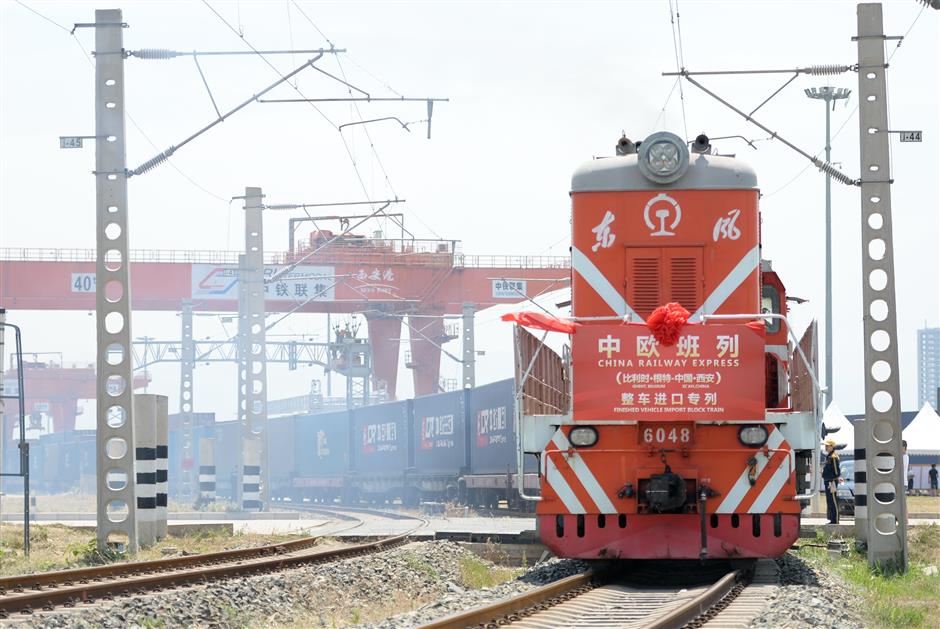 November 5 – China hosted the world's first import-themed national-level expo. The first China International Import Expo attracted more than 1,000 companies from 58 countries along the Belt and Road to participate in the exhibition and made deals totaling US$57.83 billion.

December 1 – During the G20 summit, China and the US reached an agreement to suspend the levying of new tariffs on each other. 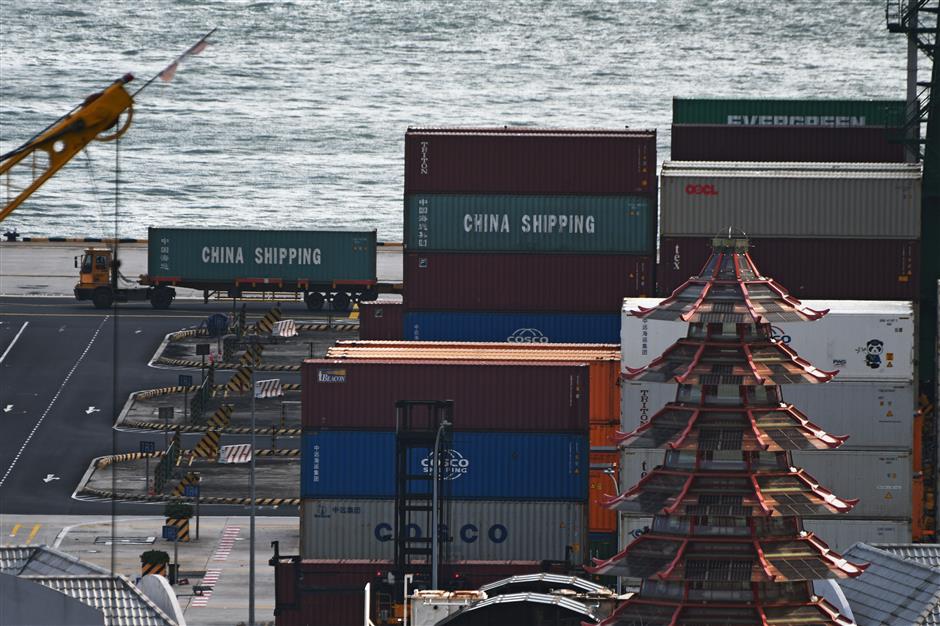 Despite the COVID-19 pandemic dealing a heavy blow to international trade, China's exports created a new high of 17.9 trillion yuan.

From January through September – The value of imports and exports totaled 28.33 trillion yuan, a historic record high for the period. China has made essential contributions to serving the global fight against the pandemic, ensuring the smooth operation of the global supply chain and driving the recovery of the worldwide economy.

According to the latest data from the WTO, China's international import market share in the first half increased by 0.7 percentage points year on year to 12 percent.